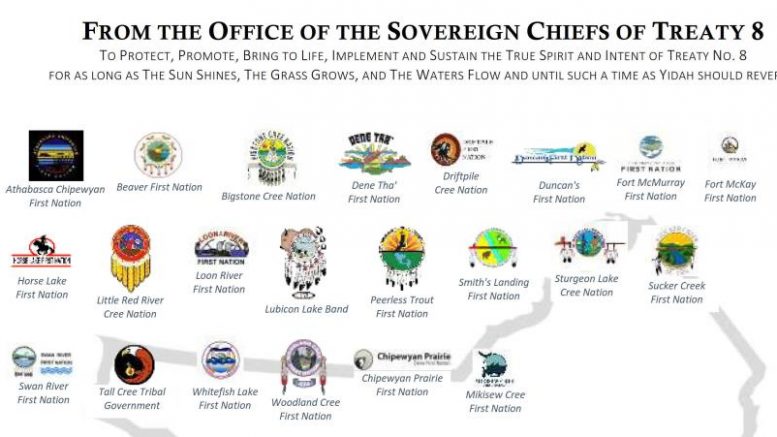 (Treaty 8 First Nations of Alberta) – In the aftermath of the recent federal election, the talk of Alberta separating from Canada rises again and the likes of McGovern and Downing are doing stump speeches to convince Albertans and Saskatchewanians to join in their bad idea of separation of the western provinces from the rest of Canada (i.e. WEXIT). In the National Post, Tristin Hopper, wrote an opinion piece in which he writes “a quick guide to why a sovereign Alberta is a really, really bad plan in almost every way.”

We as the Chiefs of Treaty No. 8 see it in the same light that it is a bad idea. As Chiefs, with our united voices, and on behalf of our 22 Member Nations, with clear conscience declare We are strongly opposed to the idea of separation from Canada.

Our Nations have lived on and cared for our homelands since time immemorial. We believe our inherent rights, jurisdiction and authority flow from the Creator and our deep connection to our lands and waters. In 1899, our Nations made Treaty (Treaty No. 8) with the Crown on a Nation-to-Nation basis. As part of our Treaty, we agreed to establish a relationship of sharing of our homelands (territories), including all lands in what is now Alberta, British Columbia, Saskatchewan, and North West Territories. We continue to exist as sovereign Nations with the right to exercise our inherent laws and jurisdiction over our lands.

The separation of Alberta and Saskatchewan would impose an international border through the heart of the Treaty No. 8 Territory. As before, the current talks and social media chatter seem to be led by people that are feeling the effects of the economic slump which appears is not improving. The economy affects everyone, not just a few. We believe that the silent majority of Albertans know the complexity of secession and would rather remain in a great country.

We also know that the Supreme Court of Canada has been clear that provinces cannot unilaterally declare independence from the rest of Canada. There are many other complex processes that one cannot truly fathom until it is taken apart step by step to really see how costly secession will be for the people. On top of that, the process will have to include many years of negotiations with the federal government and with the Treaty Nations of western Canada. Legally, and in all cases, the Crown is obligated to honour and respect our Treaty and inherent rights as recognized and affirmed by the Constitution Act, 1982 and the United Nations Declaration on the Rights of Indigenous Peoples.

The biggest of all that the people that are thinking and talking of separation must come to grips with is the fact that Alberta is a landlocked province. And that has a very high impact on what exactly it means for a land locked country that will have to deal with several countries to export and import goods and services let alone the huge effects that reality will have on the economy into the future. One good example is separation does not guarantee that the neighboring provinces of British Columbia or Saskatchewan will allow the freedom to build adequate pipelines to the coast to access shipment of fossil fuels to world markets.

The Treaty 8 First Nations of Canada indeed understand the frustration as we have for centuries have gone through much frustrations. In the bigger picture of things, there are many factors to consider such as the technology shift, Alberta’s quota limitations and the nature of the royalty system that was built in Alberta.

A report analyzed the business economics of the five companies: Suncor Energy, Canadian Natural Resources Limited, Cenovus Energy, Imperial Oil and Husky Energy, who together produce 80 percent of bitumen. The aggregate gross profit for these companies in 2017 was $46.6 billion. Despite the vast amount of dollars generated in the Oil and Gas industry, Alberta continuously rewards the shareholders by cutting corporate taxes, hoping that their investors won’t do business elsewhere. Alberta is a competitive market for capital, however that money leaves this country. The shareholders are the only beneficiaries of this industry. Husky Energy saw a $233-million benefit from Alberta’s tax benefit, yet the company is still choosing to lay off employees. Treaty 8 holds the 3rd largest resource of bitumen in the world. Perhaps Albertan’s should work together with us on a strategic approach to change the way Alberta Government does business whereby everyone benefits from this industry.

We reiterate, any process of separation which may take place without maintaining the true spirit and intent of our Treaty and without the consent of our Member Nations would be contrary to constitutional and international law. It would also directly violate the basis on which we agreed, pursuant to Treaty No. 8, to share the lands.

We strongly believe that the issues and problems can be resolved through open and accountable processes that garners real solution-focused problem-solving approaches that will help all Canadians to get out of the slumping economy of the day. All things seem to go through cycles of good and bad times, it is not the first time, nor will it be the last, just one thing remains: CANADA is still the greatest COUNTRY in the world. Let’s not give that up because of feelings of alienation or a down-turn in economy.