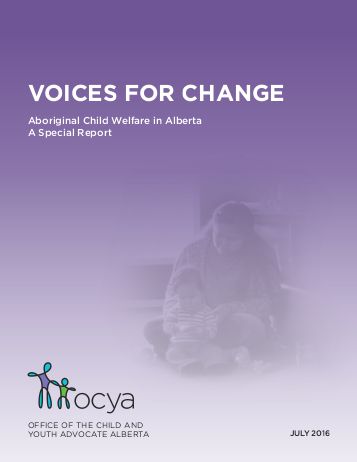 Edmonton…The Office of the Child and Youth Advocate (OCYA) has completed a Special Report on the over-representation of children and youth in the intervention system (child welfare system) and is publicly releasing the results and recommendations as outlined under the Child and Youth Advocate Act. The report is entitled “Voices for Change: Aboriginal Child Welfare in Alberta.”

“The over representation of Aboriginal children in the child welfare system in Alberta is among the highest in Canada. Significant reforms are needed, and should be based on a renewed partnership between Government and Aboriginal people. The voices of Aboriginal people must be heard,” stated Del Graff, Provincial Child and Youth Advocate.

From January 2015 to January 2016, information was collected from over 700 stakeholders through small gatherings, interviews, and online surveys. Children, youth, Elders, caregivers, and other groups shared their perspectives about what was important to them before, during, and after their involvement with the child welfare system.

Although some progress has been made in the past few years, the OCYA found that the level of overrepresentation in Alberta is still among the highest in Canada.

The report states: “Even though only one in ten children in Alberta is of Aboriginal heritage, they make up 69% of those in the child welfare system. Métis children are about six times as likely to be in care compared to their non-Aboriginal peers, while First Nations children are over 30 times as likely. Although the last three years have seen reductions in the actual numbers, this level of overrepresentation remains consistent, and is among the highest in Canada.

“This is not a new problem. This overrepresentation began long ago, accelerated in the 1960s, and has become more pronounced in recent decades. Despite a series of reports drawing attention to the issue, and to other difficulties experienced by Aboriginal young people in child welfare systems, there has been little meaningful change. The degree of the problem indicates this is a systemic issue. Things are clearly not working. The situation is not tenable for anyone – not for Aboriginal families and communities, not for the child welfare system, and especially not for the Aboriginal children who are in care.”

With first hand perspectives and additional research, the Child and Youth Advocate identified a number of systemic issues that contribute to the overrepresentation of Aboriginal children in Alberta’s child intervention system.

In a statements, Graff stressed, “The recommendations in this report must be acted on to improve supports and services for Alberta’s Aboriginal young people. The intent of Special Report is not to find fault with specific individuals, but to identify and advocate for system improvements that will help enhance the overall safety and well-being of children and young people who are receiving designated services.”

Chief Richard Kappo, Grand Chief of Treaty 8 First Nations of Alberta (T8FNA) adds his voice to emphasize and support the recommendations contained in the “Voices for Change” special report released by the Office of the Child and Youth Advocate (OCYA).

Following an extensive engagement process regarding the overrepresentation of Aboriginal young people in the child welfare system, the OCYA special report made a set of recommendations that the T8FNA fully supports.

Grand Chief Kappo noted that, “many of these recommendations are the exact solutions the Alberta Treaty 8 Chiefs and the Directors of the Delegated First Nation Agencies on reserve have said for many years. It has long been a contention of T8FNA that the provincial child welfare system and the federal funding methods actually encouraged and enabled removing children from their families and communities.”

“There has been a change in government in this country and we are very hopeful about a new relationship, but in many ways much has remained the same. The old government was content to set up policies that hurt our children, families and communities and we are still feeling the effects of these policies,” stated Deputy Grand Chief Rupert Meneen. “The new government has made a commitment to implementing UNDRIP and the Truth and Reconciliation Commission’s 94 Calls to Action to strengthen the relationship processes. We agree with those actions and recognize the need to do so but we need to see a solid commitment on the part of Alberta and Canada.”

Grand Chief Kappo also commented “The Chiefs of Treaty 8 (Alberta) are committed to working with our Federal and Provincial partners to correct previous wrongs and work to close discriminatory gaps and practices. We are ready to start working together so that, we don’t lose any more of our children.”

A copy of the Special Report, “Voices For Change: Aboriginal Child Welfare in Alberta” and its recommendations are available on our website: http://www.ocya.alberta.ca/adult/publications/ocya-reports/

The OCYA also created a video featuring young people, Elders, parents, and support workers’ perspectives on how to improve the child intervention system. It can be found here: http://www.ocya.alberta.ca/child/videos/voices-for-change/.

This is the Advocate’s second Special Report, previously he focused on youth aging out of government care. The Office of the Child and Youth Advocate is an independent office of the Legislature, representing the rights, interests and viewpoints of children and young people receiving designated government services.