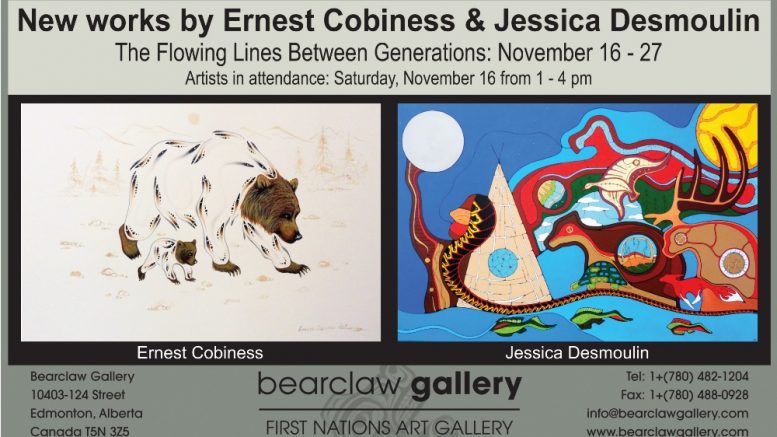 (ANNEws) – “The Flowing Lines Between Generations” is a recurring theme in the stunning exhibition of new works by artists Ernest Cobiness and Jessica Desmoulin on exhibit at Bearclaw Gallery in Edmonton from November 16 to 27. Art lovers are in for a rare treat if they visit the gallery on opening day – November 16 – because the artists will be in attendance from 1 to 4 pm.

Ernest Cobiness (Wahbi-Benaise) is from the Elk Clan of the Anishinaabe Nation. He started painting as a child and was mentored by his father, the great Eddy Cobiness, founder of the Canadian “Native Group of Seven.” Ernest has painted his whole life. He is also an activist and he loves hunting, fishing, camping and attending ceremonies and gatherings. The flowing lines between the generations are of the utmost importance to him as he straddles the line between his father’s style and imagery and his own.

Ernest explains, “I was raised in Buffalo Point First Nation in Southeastern Manitoba. I am the father of 5 children and the grandfather of 10. I am the son of the late Eddy Cobiness, Founder of the Canadian “Native Group of Seven.”  I never went to art school because my father was my teacher and mentor. When my father passed, my mother asked me if I could carry on this legacy. I honour my father in my work but truly have my own style. I hope one day my children and their children might continue.”

Ernest works with different media but mainly acrylics. After his father’s passing, he started practicing different line paintings of his father’s style and he combined it with his own realistic paintings. “I came up with the artwork you see today,” he notes, “kind of line the new generation style of the “flowing art of Cobiness.”

Ernest is working hard to maintain the artist recognition cultivated by his father over the years. He says, “My goal in absorbing this wisdom is that I want my people to see the beauty of ourselves and our culture with pride and dignity. I strive to succeed at this profession not only for my parents’ approval but to be a role model for my children, their children, other young artists and my people.

Honouring the generations is also important to Jessica Desmoulin. She was born in Saskatoon in 1978, of Ojibway lineage from the Pic River First Nation in Ontario. As a child she lived throughout Saskatchewan, Alberta and British Columbia, and now resides in Edmonton.

As a young adult, and after the birth of her second child, Jessica developed an illness that left her unable to work outside the home. During this time, she took the opportunity to approach her art seriously and began to paint on canvas.

Not knowing the work of the early Ojibway Woodland artists such as Norval Morrisseau, Carl Ray and Roy Thomas, Jessica developed symbols in her work that mirrored the visual language created by these artists. Coincidentally, lines of communication, division circles and x-ray imagery began to emerge in her paintings.  She feels these symbols were always inside of her, passed down from her ancestor.

“When I first began to paint, my work centered around images that came to me intuitively,” explains Jessica.  “I grew up thousands of miles away from the traditions of my people, the Ojibway. One day someone pointed out the division circles in my work, the lines of communication, the outlined images that were seen in Woodland art. They made me aware that these were ancient images in the Ojibway culture. I had no idea. I was later told that what occurred was ‘Blood Memories,’ the genetic ties to the teachings of my ancestor.”

“The Flowing Lines Between Generations” will be on exhibit at Bearclaw Gallery in Edmonton from November 16 to 27. The gallery is conveniently located in the Oliver Arts District at 10403 124 Street. Check out their website at Bearclawgallery.com.

Be the first to comment on "Ernest Cobiness and Jessica Desmoulin on exhibit at Bearclaw: Nov. 16 – 27"