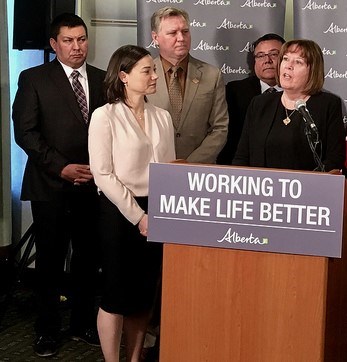 (February, 20018) – Albertans will see new jobs, more private-sector investment and increased green power generation as the next phase of the Renewable Electricity Program focuses on partnerships with Indigenous communities.

The highly competitive opening round of the program attracted about $1 billion of private-sector investment in green power generation in Alberta. Building off that momentum, the Alberta Electric System Operator (AESO) is preparing to open the second and third series of competitions, which will add approximately 700 megawatts of renewable energy, or enough to power nearly 300,000 homes.

“Alberta isn’t just a leader in oil and gas, we’re a leader in renewable energy, too,” explained Shannon Phillips, Minister of Environment and Parks and Minister responsible for the Climate Change Office.

“Today’s announcement recognizes the valuable work of Indigenous communities in advancing our province’s transition to renewable electricity. Our made-in-Alberta plan is getting results, as we see more investment in renewables generate low-cost green power, create good jobs and diversify the economy.” 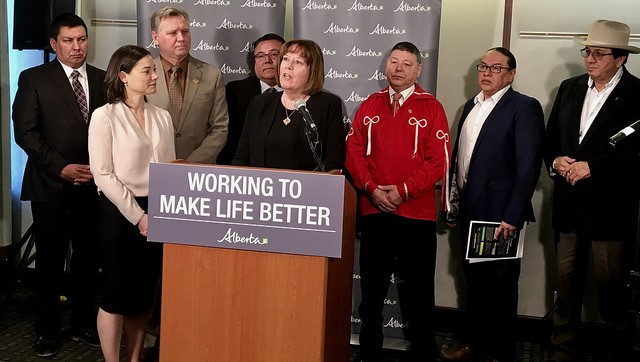 Indigenous leaders join ministers McCuaig-Boyd, Phillips and Feehan to announce details on the next two rounds of the Alberta Renewable Energy Program.

The second round of competition will see companies partner with Indigenous communities to provide 300 megawatts of renewable power. Each bid will have a minimum Indigenous equity component, which can include an ownership stake in the project or land use agreement between the company and the community. This will help create jobs and economic benefits in Indigenous communities and across Alberta.

“This is part of securing Alberta’s energy future,” remarked Minister of Energy Margaret McCuaig-Boyd. “Indigenous communities have had a leading role in developing green energy on a smaller scale and I’m pleased this next round of the Renewable Electricity Program will help support larger, utility-scale projects while creating good jobs and economic benefits for Indigenous Albertans.”

The third round of the program will add about 400 megawatts of renewable electricity and follow the same open competition format as round one, which saw strong investor confidence and achieved a record-low price for renewable energy in Canada.

AESO, which administers the program, is expected to open both auction-style competitions this spring with successful bidders announced by the end of 2018.

“Every day, Indigenous peoples see the effects of climate change first-hand,” stated Treaty 8 First Nations of Aberta Grand Chief Rupert Meneen. “We need to stand up, be heard and take action on this issue because it impacts everyone. This round of the Renewable Electricity Program supports our communities’ efforts in developing renewable projects. Working together, we can create a better life for everybody – Indigenous peoples and Albertans.”

“Indigenous communities have been at the forefront of developing micro-generation projects and training individuals for renewable energy jobs of the future,” added Minister of Indigenous Relations Richard Feehan. “Participating in the Renewable Electricity Program is the next logical step. Taking part in this program will help create local jobs and enable Indigenous communities to emerge as leaders in a low-carbon economy.”

The highly competitive first round attracted private investment from Alberta and around the world, with successful bidders to provide 600 megawatts of renewable electricity to the grid by the end of 2019.

“Our relationship to our traditional lands and to our communities is one that is deeply rooted in our spirituality and in our culture,” noted Metis Settlement General Council president Gerald Cunningham. “We must build unique partnerships that create opportunity for our people, respect our role in decision-making and honour our responsibility to protect our environment. The Government of Alberta’s Renewable Electricity Program has tremendous potential to do these things and to increase Indigenous participation in the green economy.”

Support for the Renewable Electricity Program is made possible by the Climate Leadership Plan and is not funded by consumer electricity charges. In total, the program will support the development of 5,000 megawatts of renewable electricity capacity to reach a target of 30 per cent renewable energy by 2030.

“Alberta’s approach is unique in Canada,” concluded Guy Lonechild, CEO, First Nations Power Authority.  “Their Renewable Electricity Program is a great opportunity for Indigenous organizations to develop renewable energy projects that will not only benefit their communities but also help the province green its electrical grid.”

Treaty 8 Chiefs of Alberta are cautiously optimistic after budget release