The swearing in ceremony for the Grand Chief and the Deputy Grand Chief of Treaty 8 First Nations of Alberta was held earlier this month as part of their Annual General Meeting.

At the event, hosted by Sucker Creek First Nation, attendees witnessed the dedication and commitment of the Grand Chief and the Deputy. These positions are held for a period of one year and are decided through election by the Chiefs of Treaty No. 8 [Alberta]. 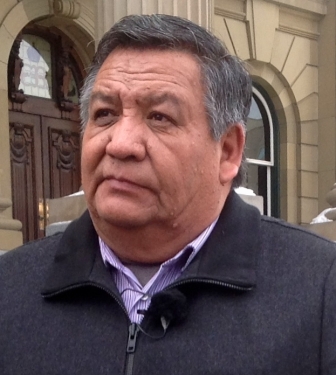 Continuing in his position as Grand Chief, is Chief Steve Courtoreille of Mikisew Cree Nation. Joining him as Deputy Grand Chief is Chief Issac Laboucan-Avirom of Woodland Cree First Nation. Both Chiefs are looking forward to working with the other Chiefs to protect Treaty Rights and Treaty 8 lands and territory.  They will also be working collectively at developing a new relationship with Alberta’s newly elected provincial government.

The staff at Treaty 8 First Nations of Alberta stated, “We are happy to be continuing the work with such great Chiefs who bring a wealth of experience to the table. Under their leadership we will continue to protect, promote, bring to life, implement and sustain the true spirit and intent of Treaty No. 8 as long as the sun shines, the grass grows, and the waters flow.”