A remarkable husband and wife team are going the extra mile to ensure that Canadians have the opportunity to learn and grow and participate in the Journey to Reconciliation.

On Monday, July 6 the Creating Hope Society of Alberta, in partnership with the City of Edmonton, played host to the “TRC Walkers’ Journey to Reconciliation” which took place in the Stanley Milner Library located in downtown Edmonton. The focus of the TRC Walkers is to honour survivors and victims of the Indian Residential Schools in an effort to create awareness and educate society about the truth as Canada moves toward reconciliation.

The TRC Walkers include 59 year old Patrick (Joseph) Etherington, and his wife and companion, Frances Rose Whiskeychan. They have become known as the Truth and Reconciliation (TRC) Walkers, because of the journeys they’ve made, the reasons they’ve made them and the messages they’ve delivered along the way. The reasons for the walk haven’t changed during the seven years the two have been walking Canada’s highways, sometimes with family or friends or supporters, but the goals have varied a bit to reflect the 94 recommendations that the TRC delivered when they presented their Final Report on June 2 this year. 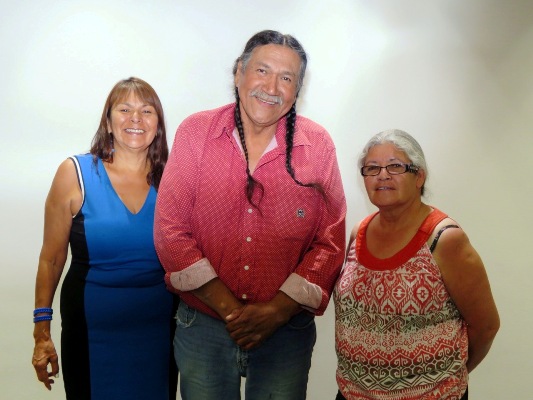 “The reason we walk,” said Etherington, “is because we want people to know that our stories are true. We want to educate them a little and make them aware.

“We can no longer turn a blind eye to the consequences of those terrible years of Indian Residential Schools. Our goal has always been to educate Canadians of every culture and every walk of life. Our children, including myself and Frances, suffered in these schools; we are trying to help in the reconciliation process, but first people have to know the truth and accept the truth.

“For nearly 140 years Aboriginal children were taken from their homes and away from their families. They were put in a strange and oppressive environment and not allowed to connect with or talk to with their families, often for months at a time.”

That goal was broadened after the TRC’s report came out.

“We want to talk to as many people as we can, including civic and Aboriginal leaders because we’d like to see some of these key recommendations followed up on immediately,” Etherington emphasized. 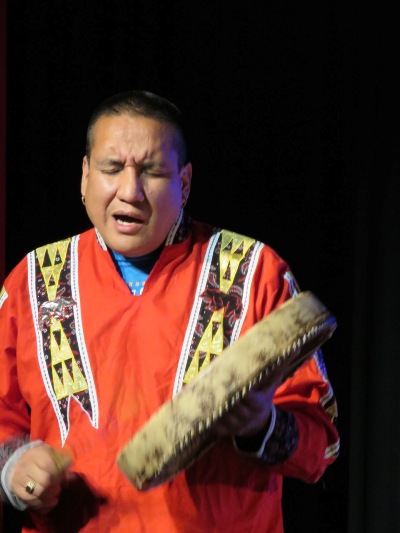 Drummer/singer Adrian LaChance welcomed Etherington and Whiskeychan with a beautifully delivered song to honour the occasion.

“There are already too many reports with meaningful recommendation gathering dust in government offices and archives, reports and recommendations that have been ignored and shelved and forgotten about. Not this time if we have anything to say about it; our goal is to help keep the TRC’s 92 recommendations in the news, on social media, in the minds of Canadians and on the agendas of the various bureaucracies able to help ensure these recommendations are followed up on.

“In addition to this agenda we are also doing what we can to encourage the electorate to get rid of Harper in October. His leadership when it comes to Indigenous relations is non-existent and it’s time for Canada to vote for a party that will encourage and facilitate with Aboriginal people. These so-called Conservatives are anything but – they need to go and the sooner the better.”

When Etherington and his wife walked into Ottawa on May 30 this year to watch and listen when the TRC released its Final Report, it brought an end to another of the many journeys the two have initiated and completed during the past seven years. They were joined by several young adults that helped them during their TRC Walkers events. These young walkers included Patrick Etherington Jr., Edmond Etherington, Maurice Wesley and survivors, Remi Nakogee, and Darren Hughie ( Huey).

Patrick and Frances have walked somewhere between 12,000 and 15,000 kilometres over the years, including lengthy walks from Cochran, Ontario to cities that include Ottawa, Toronto, Halifax, Thunder Bay. and Winnipeg. During several of their walks they’ve received support from both the Anglican and United Church, who helped with food and accommodations when the TRC Walkers made their way to various TRC national events. The duo recently attended a ceremony in Hinton, Alberta before making their way back to Ontario. 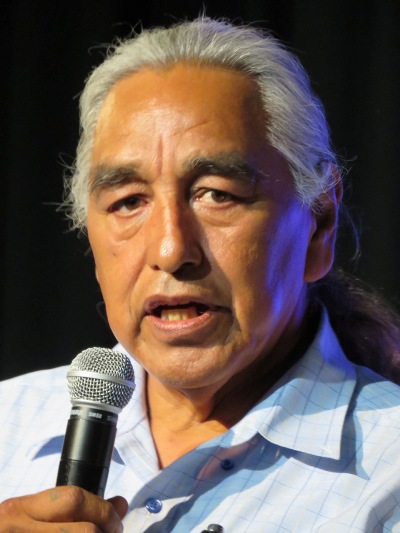 Elder Emile Durocher offered a prayer during Etherington’s talk on residential schools and the reconciliation process.

Stepping onto the stage at the Stanley Milner Library, Etherington opened with a three minute dialogue in his Native tongue; he is member of the Fort Albany First Nation, an Ojibway-Cree community in Northeastern Ontario’s Cochrane District. The community is located on the southern shore of the Albany River, near James Bay and is only accessible by air or by winter road.

“It’s nice to be here to spend time with you,” he began after introducing himself to the audience, noting that “when I born I was given the name, Joseph Roderick Etherington but when I was put into a Catholic-run Indian Residential School the nuns told me that they already had enough Josephs and that from now on I would be called Patrick – the name stuck and it’s been Patrick ever since.”

During his oration Etherington shared a great deal of knowledge with his audience, who listened to his every word, often showing visible signs as they were shaken by his story, while at other times smiling at his humour and marvelling at his survival instincts. He spoke about the reasons for the walks to the various TRC events over the past seven years – walks which still continue now so that he and Frances can keep the topic open and in front of Canadians.

“If Canada and Canadians are to implement the recommendations set forth by the TRC, then they need to be aware – and that cannot happen if the issue is put on the back burner and forgotten. Headline news only lasts for a few days so it is imperative that this story – and the harm the schools did to our Aboriginal populations and the lasting effects that ensued – remain in the news and in the minds of our society.

“Reconciliation can only happen if we, as a society, remain conscious and aware that the healing process has a long way to go before we are whole again. We need to work together to eliminate the myths and the stereotyping and the racism that Indigenous people have faced for more than 150 years.” 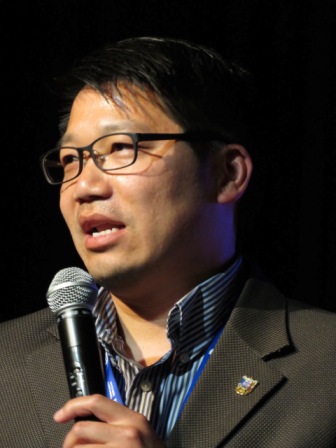 Director of Aboriginal and Multicultural Relations for the City of Edmonton Community Services, Mike Chow.

The idea for the walks or as some call them, pilgrimages, came about as a result of the work that Patrick did as a resolution health support worker.

“I was not surprised to learn that most Aboriginal people had no idea how to go about telling their stories, no idea about how to prepare and submit claims under the IAP or Independent Assessment Process,” he said. “To do this, one has to be able to read and write; they needed to have an understanding of the questions to ask and the actions they had to take before they could access the process. Understanding their inability to do this, I decided to begin an initiative that would create awareness and get the attention of survivors in my own home territory.”

In the meantime there is some good news for the TRC Walkers; the current Premier’s Conference in Newfoundland has delivered the following messages: all of Canada’s Premiers and territorial leaders are in favour of seeing all 92 TRC recommendations dealt with; even the only Conservative Premier left in the country, Newfoundland’s Paul Davis, has commented on the Prime Minister’s poor relationship with Aboriginal peoples. It is interesting to note that not once in the past nine years that Harper has been in power has he participated in or accepted an invitation to a Premier’s Conference – nor has he invited them to participate in a First Minister’s conference.

The TRC Walkers will have no more TRC events to walk to but their quest will not end. In fact, there is much to do to ensure that that the 92 recommendations are followed up on so that reconciliation will be a reality and not just a meaningless word.

During his talk Patrick Etherington spoke at length about the residential schools and how they “tried to beat the Indian out of us,” a wry smile settling on his lips when he noted, “but as you can see it did not work; we are still here as we have always been – and always will be.”

Etherington and Whiskeychan have started several of their lengthy treks from Cochrane, Ontario but they recently had an experience there that has shaken them to the core. “It is in fact, the only major mishap that we’ve experienced over the past few years,” noted Etherington.

Cochrane is a small community, that in 2011 had a population of just over 5300 residents. The town is made up primarily of English and French residents with a fairly strong Indigenous population in and around the region. Once a well known stopover and gathering place for Indigenous travellers and fur traders, this fairly isolated region is what most city folks would call the northern Ontario boonies; Cochrane is located an hour or so northeast of Timmins but south of Moosonee.

“It’s a nice place and it’s a meaningful place with historic relevance,” Etherington noted, “but it’s also an attractive starting point for our walks. Unfortunately, it’s also a place that has unnerved us because of a very unusual experience we encountered last September, early October. We were asked to deliver our message at the public high school in Cochrane and did so. In the middle of our talk two young teenage students stood up and mumbled something about how they ‘didn’t have to listen to this crap’ and then walked out the door. A teacher followed them out and I guess they went to the principal’s office. Anyway, the next day we were sitting down resting and a knock came to the door. It was a police officer. He asked us what happened at the school and we told him; he then told us that if we ever went near the school again, we would be charged for trespassing. We couldn’t believe our ears and to this day we still don’t know the exact reasons for this – but we intend to find out.”

Willing to let the matter be, Etherington and Whiskeychan remained upset over the incident but the advice they’ve received from Elders and Aboriginal leaders has changed their plans and they will now seek legal advice.

“We are going to try and meet with (Toronto-based lawyer) Pam Palmater when we get back to Ontario,” assured Edtherington, who says he wants “to talk to one of the best legal minds when it comes to Indigenous issues, and she is the lawyer that can advise us and perhaps act on our behalf.”

For more information and to read some different stories and articles on the journey’s made by the TRC Walkers and others, check out the website at: http://www.ucrdstore.ca.