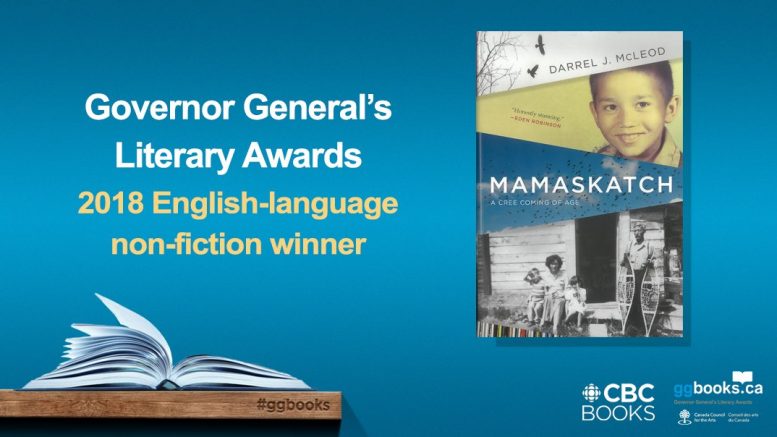 (November 2018) – Cree author Darrel J. McLeod’s powerful  memoir, Mamaskatch: A Cree Coming of Age, is a heart-breaking story of resilience – a must-read for all Canadians. It is the winner of this year’s prestigious Governor General’s Literary Award in the English Non-fiction category. Mamaskatch was among the 70 Canadian books considered to be the best published this year across seven categories, written in both English and French. The awards will be presented by Julie Payette, Governor General of Canada, in Ottawa on November 28, 2018.

Growing up in a tiny village near Lesser Slave Lake, Alberta, Darrel was surrounded by his Cree family’s history. In shifting and unpredictable stories, his mother, Bertha, shared narratives of their culture, their family and the cruelty that she and her sisters endured in residential school. McLeod was comforted by her presence and that of his many siblings and cousins, the smells of moose stew and wild peppermint tea, and his deep love of the landscape. Bertha taught him to be fiercely proud of his heritage and to listen to the birds that would return to watch over and guide him at key junctures of his life.

However, in a spiral of events, Darrel’s mother turned wild and unstable, and their home life became chaotic. Sweet and innocent by nature, Darrel struggled to maintain his grades and pursue an interest in music while changing homes many times, witnessing violence, caring for his younger siblings and suffering abuse at the hands of his surrogate father. Meanwhile, his sibling’s gender transition provoked Darrel to deeply question his own sexual identity.

The fractured narrative of Mamaskatch mirrors Bertha’s attempts to reckon with the trauma and abuse she faced in her own life and captures an intensely moving portrait of a family of strong personalities, deep ties and the shared history that both binds and haunts them.

Beautifully written, honest and thought-provoking, Mamaskatch – named for the Cree word used as a response to dreams shared – is ultimately an uplifting account of overcoming personal and societal obstacles. Despite the traumas of Darrel’s childhood, deep and mysterious forces handed down by his mother helped him survive and thrive; her love and strength stayed with him to build the foundation of what would come to be a very fulfilling and adventurous life.

The Canada Council for the Arts writes that “Mamaskatch: A Cree Coming of Age dares to immerse readers in provocative contemporary issues including gender fluidity, familial violence, and transcultural hybridity. A fast-moving, intimate memoir of dreams and nightmares—lyrical and gritty, raw and vulnerable, told without pity, but with phoenix-like strength.”

Darrel J. McLeod is Cree from Treaty 8 territory in Northern Alberta. Before deciding to pursue writing in his retirement, he was a chief negotiator of land claims for the federal government and executive director of education and international affairs with the Assembly of First Nations. He holds degrees in French literature and Education from the University of British Columbia. He lives in Sooke, BC, and is working on a second memoir following the events in Mamaskatch. In the spring of 2018, he was accepted into the Banff Writing Studio to advance his first work of fiction.

In an interview setting, McLeod explained his motivation for writing the memoir. He said, “Two things primarily. First, An Elder I loved and respected, Catherine Bird, told me I should. We worked together and often exchanged stories. One day she said to me, “Tairl, you have to write these stories down. They will help people.” I thought she was right, so I began to write very short stories almost immediately and that was twenty-five years ago. Some of those initial stories found their way into Mamaskatch.

“The second was a compulsion to share the story of all the trauma my family went through, as a result of cultural and community disruption – the loss of language, of our ancestral home and way of life within two generations. Colonization was destructive and all-encompassing. My family was thrown into the great unknown with a “sink or swim” mentality, no supports in the transition. I got through it all relatively intact but the rest of my family didn’t. My great-grandfather’s generation was healthy and lived to a ripe old age – without any help from the state I might add – there was no old age pension for treaty people until the sixties I believe. There were treaty payments, but this was minimal.”

McLeod described his writing process. “It took five years, actually six, including the final year of editing,” he explained.  “It was truly an emotional roller-coaster. Wakeful nights of joy, after successfully reviving the essence of a loved one, or of sorrow after writing a difficult scene or recalling a tragic memory. In writing a memoir, and portraying loved ones as characters on paper, I got to see them in a different light – dynamics, motivations, and causalities that I had never before contemplated. The net effect though, was that in spite of perhaps seeing a different, at times darker, side of family members, I ended up loving them all even more than before.”