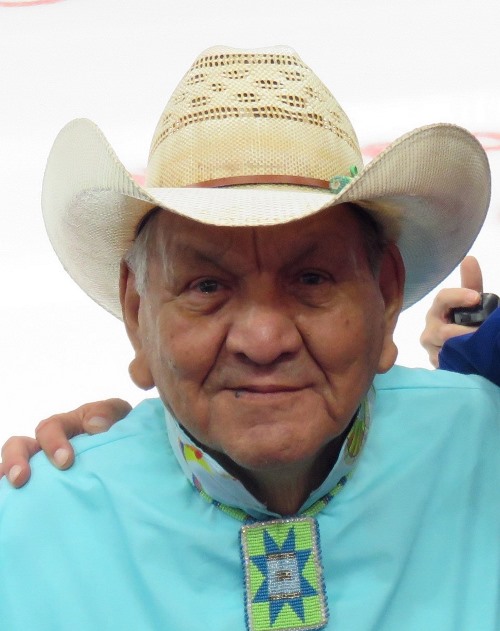 (ANNews) – Just hours before the Official Opening of Rogers Place in Edmonton, special guests were invited to a glimpse of the spectacular Ice District venue for the unveiling of renowned artist Alex Janvier’s 14 metre (diameter) masterpiece, Tsa asa ke k’e (Iron Foot Place). This stunning mosaic honours the land area where Edmonton is located, highlighting the colours of the Saskatchewan River, the beautiful skies, the stories of the area, and the clear waters from far away mountains.

Iron Foot Place is a spectacular floor mural, a multi-coloured mosaic reminiscent of the artist’s recent acclaimed “Circles Circles” exhibition. A dozen or more Grade 4 and 5 Kensington Elementary School students, including some of the artist’s grandchildren, faced one another across a black-clothed floor, and slowly pulled the fabric toward themselves, to unveil the brilliantly coloured design.

Master of Ceremonies, Guy Freidman welcomed the gathering and before introducing Elder John Janvier to deliver the prayer, he noted, “The honour of unveiling this significant mosaic by Alex Janvier as the first event to take place” in the new facility “is not by chance. Alex’s piece illustrates Edmonton’s history and continuing legacy as a gathering place. Unveiling this work of art officially opens the space as a location where all can unite; it links Rogers Place to Edmonton’s past, present and future.” 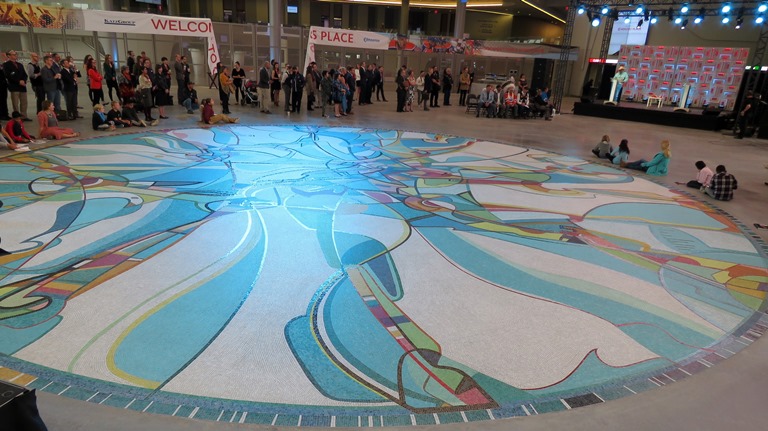 Alex Janvier’s spectacular 14 metre mural was unveiled during the grand opening of Rogers Place in Edmonton on September 8, 2016. Photo by John Copley

An upbeat and appreciative audience admired the artwork and learned about the important role Indigenous peoples have played in the growth of Alberta and its capital city. Janvier’s art is located in the centre of Ford Hall, originally referred to as the Winter Garden.

The very spacious enclosure doubles as a pedway and a main entrance to the arena, where visitors can access all of the amenities. Rogers Place is a state of the art modern facility that will serve as a concert venue and the home of the Edmonton Oilers NHL hockey team. It is an impressive venue complete with 1200 TV screens; it offers free access to wi-fi and utilizes the Rogers Place App. The arena also offers restaurants and food services on the main and upper concourses as well as on the mezzanine and PCL loge levels. In addition to Ford Hall’s Iron Foot Place, visitors can also enjoy community art in the Downtown Community Arena and in both the Northwest and Northeast Plazas.

“Ford Hall,” noted Edmonton Mayor Don Iveson, “will act as a gathering place and as a commentary starter; it will promote community engagement and foster healing and reconciliation among both Indigenous and non-Indigenous Edmontonians.”

Alex Janvier thanked the Edmonton Arts Council, the City of Edmonton, the Oilers Entertainment Group “and the public here and everywhere across Canada; everyone has been very supportive. I’d also like to thank Monsaika, the Montreal company that put the art together; they did a wonderful job putting it together piece by piece.”

Nearly one million pieces of coloured stone, collected in Mexico, were used to create the spectacular piece of art. 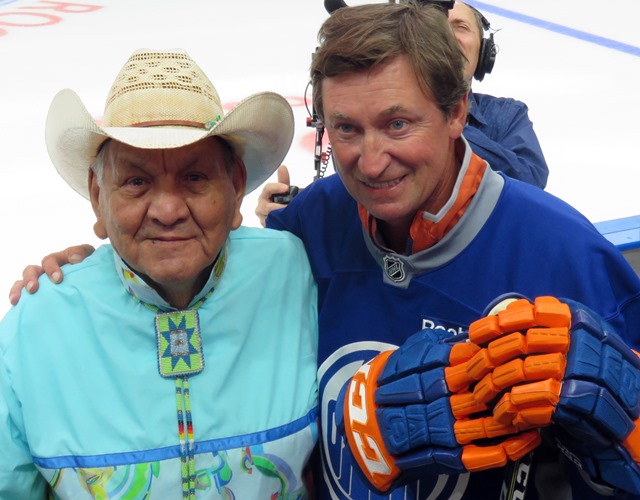 “I really want to thank the mayor and council of the City of Edmonton,” emphasized the 81-year-old artist. “This is a remarkable city. I first walked here when I was 15 and Edmonton had board sidewalks; it was a lot of muddy streets. At 81, I have watched this city grow; today, looking at this awesome piece of artwork in this large, modern facility is amazing. It will remain here in a city that’s always looking forward. It’s a city that is growing and it is people like you who make it happen. I also want to thank the Cree; this is their territory and I offer them special thanks for allowing my artwork to be enshrined in the hallway of this beautiful and fabulous looking arena.” 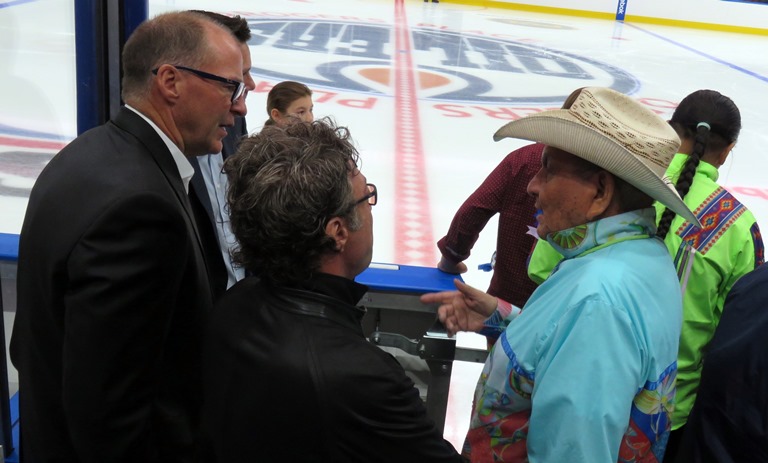 Near the close of the unveiling ceremony, media were invited into the arena and down to ice level for a special celebration, one that included (the great one) Wayne Gretzky and two of his sons, Kevin Lowe, Edmonton Oilers owner Darryl Katz, and other celebrities/VIPs. Gretzky presented Alex with a beautiful hockey stick while Bob Black offered him a new Oilers jersey with his name and number “16” on it.

To the cheers and applause of the gathering, Janvier noted: “I was a defenceman once. I asked the Oilers if they wanted me – because I think they could use another good defenceman…”

Read the complete story of the Alex Janvier artwork unveiling in the September issue of Alberta Native News. 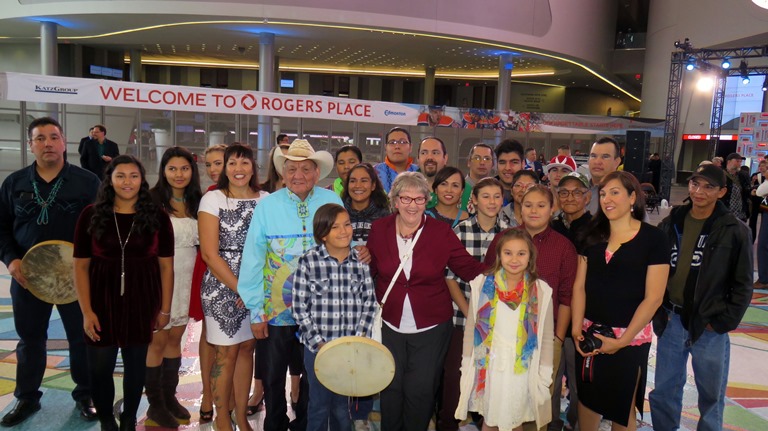 Alex and Jacqueline Janvier gather with family following the unveiling of the magnificent floor mural at Rogers Place opening event in Edmonton. Photo by John Copley