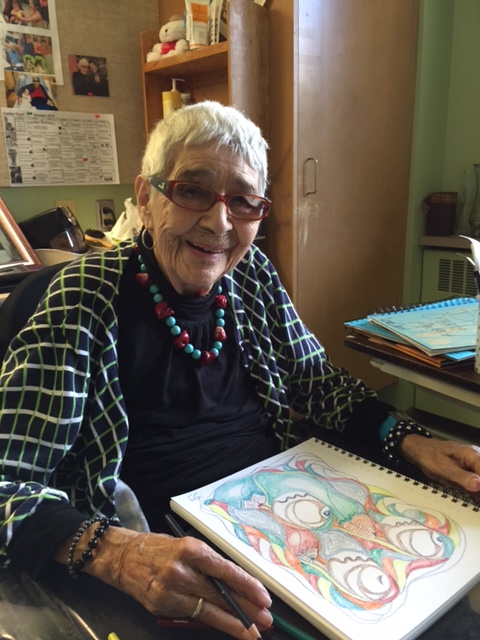 Daphne Odjig was the driving force behind the Indian Group of Seven and their quest to be taken seriously as artists.

(ANNews) – When Daphne Odjig passed away on Saturday, October 1, 2016, the world became a quieter and more solemn place. She was a winner, a warrior, a free spirit and one of the most influential artists of the 20th Century. Born on September 11, 1911 in Manitoulin Island’s main city of Wikwemikong, Odjig was the eldest of four children born to Dominic and Joyce (nee: Peachley) Odjig. Her British-born mother met and married her husband in England, where he was serving the Canadian army during the First World War.

Daphne moved to Kelowna, British Columbia later in life, having spent much of her time in Winnipeg, Manitoba, where she worked diligently to enhance her career, a career that would eventually lead to many accolades, awards and recognition, both from her peers and from the public. When she passed on, Daphne was residing in Kelowna; she was 97 years old.

She was a recipient of the Governor General’s Award in Visual and Media Arts, an accolade she received in 2007. Her work was also the subject of a solo exhibition at the National Gallery of Canada in 2009. The National Gallery exhibit: “Drawings and Paintings of Daphne Odjig, A Retrospective Exhibition,” distinguished Daphne Odjig as being the first Canadian Aboriginal female artist to exhibit a solo show at the prestigious gallery. Odjig was also elected to the Royal Canadian Academy of Art, was a recipient of a National Aboriginal Achievement Award, and the holder of numerous honourary doctorates from several Canadian universities. Perhaps her greatest achievement came when she received the Order of Canada and was presented with an eagle feather from the Chief of her home reserve, an honour traditionally bestowed only upon the bravest warriors and the best hunters. 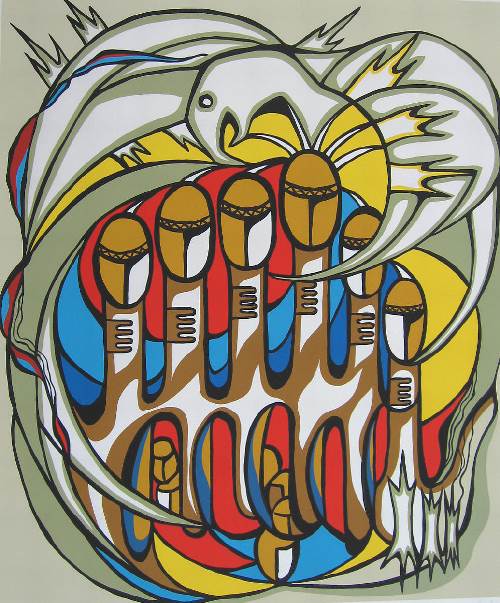 Thunderbird of Courage (1977) By Daphne Odjig was part of an exhibit at the Art Gallery of Alberta entitled 7: Professional Native Indian Artist Inc. that was held from March – July 2016.

“I believe that Daphne planted the seed of her own great talent, nurtured it, and from her own success inspired and enabled other Native artists,” noted author and journalist, Clint Buehler, a learned scholar when it comes to Indigenous art and the role that Indigenous artists have played during Canada’s continuing growth. “She worked with such great artists as Norval Morrisseau and Alex Janvier; her influence, ability and wisdom helped many Canadian Aboriginal artists achieve the public recognition and acclaim they deserved.  That was just the beginning of her influence and it was built on her own incredible talent. The success of Daphne, Norval, Alex and many others would provide the foundation for the success of the next wave of Native artists such as Joane Cardinal Schubert and Jane Ash Poitras, who in turn are being succeeded by yet another new generation of brilliantly talented Indigenous artists.”

Odjig was considered to be a Woodlands artist, but it is important to note that the varying colourful shapes and Ojibwa pictographs she created were often intermingled and influenced by the work of Pablo Picasso and Vincent Van Gogh, artists whose work she long admired. She played a prominent role in leading First Nations painters into the mainstream of Canadian art. Much of that success came in the early 1970s when she, along with Norval Morrisseau, Jackson Beardy, Carl Ray, Eddy Cobiness, Joseph Sanchez, Alex Janvier and others met in Winnipeg to talk about such things as art and the establishment, an establishment Janvier said that “didn’t have much use for us, or for the work we created.” 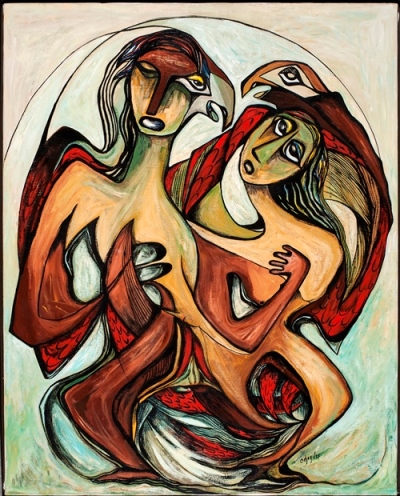 So Great Was Their Love (1975) by Daphne Odjig was on exhibit at the Art Gallery of Alberta from March – July 2016.

In an interview Mr. Janvier lauded her spirit, tenacity, perseverance and wit which he said “were among the great skills” that enabled Daphne Odjig to succeed as both an artist and an inspirational Canadian woman. He also spoke about the creation of the ‘Indian Group of 7’ and noted that the group was actually comprised of numerous other members who also attended the meetings in Winnipeg. These artists supported the idea of “going public” to make society aware that Indigenous art wasn’t a novelty item, but instead a distinct piece of art, derived from meaningful tradition, a symbol of the unique identity of Indigenous culture and society.

“There were quite a few artists that came through those doors to participate and talk,” noted Janvier. “One of them, and he really doesn’t get enough credit, was Bill Reid. He was a great artist but he was being led around by an advisor who was always hanging about and talking too much and getting in the way. Someone, maybe Daphne, maybe Norval Morrisseau, who had many philosophical statements at his disposal, told Reid’s advisor that he should go and wait at the airport because his participation wasn’t welcome. He didn’t come back after that, and unfortunately Bill Reid’s name didn’t allow us to be called the Group of 8. That title came about through the media, they put that tag on us – called us the Indian Group of Seven.”

In fact, noted Alex, it was Bill Reid who encouraged media to pay attention to what was going on when it came to Indigenous art and the people who created it.

“Bill Reid,” noted Janvier, “worked for a radio station, I think it was CBC. He made some connections and they showed up. He played a key role in helping us establish an identity through his media connections and expertise.”

It was the beginning of a new era in Indigenous Art and Aboriginal awareness. 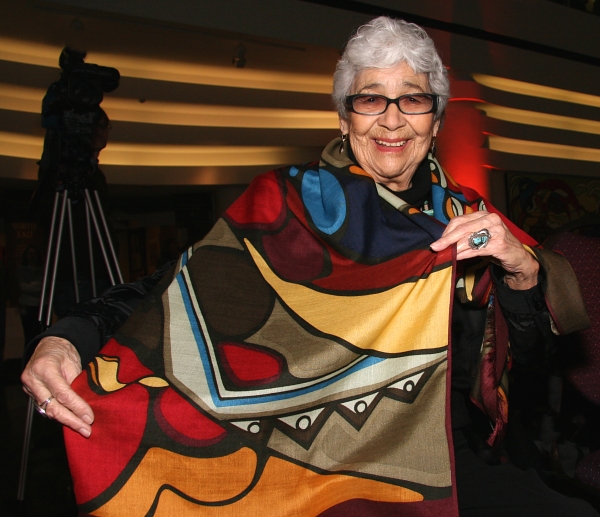 Daphne Odjig spreading joy in 2011 with one of her own creations. Photo by Lisa Siegel

Daphne and her late husband opened the Wahsa Art Gallery in Winnipeg in the early 1970s. The success of the gallery was imminent and for many of Canada’s Indigenous artists it was an ideal opportunity to get their goods in front of the buying public. The gallery specialized in Indigenous art and within two years helped to see several of the artists have their work put on exhibition at the Winnipeg Art Gallery.

In 1973, together with Alex Janvier and Norval Morrisseau, Odjig founded the Professional Native Indian Artists Association. The Group of 7 stopped exhibiting their work together in 1974 as the artists went on to establish their individual careers. The group remained friends for decades. Of the Indian Group of Seven, only two survivors remain; Alex Janvier and Joseph Sanchez.

Odjig has been referred to as the grandmother of Aboriginal art and the driving force behind the Indian Group of Seven.

“It’s true,” noted Janvier, who credited the hard work and eventual success of the group to the tenacity, doggedness and brilliant ideas offered up by Odjig. Everyone played a role, he said, but Daphne “had some great ideas and the ability to express herself. She was a catalyst and she will be missed.”

Click here and here for more information about Daphne Odjig and the “Indian Group of Seven.”