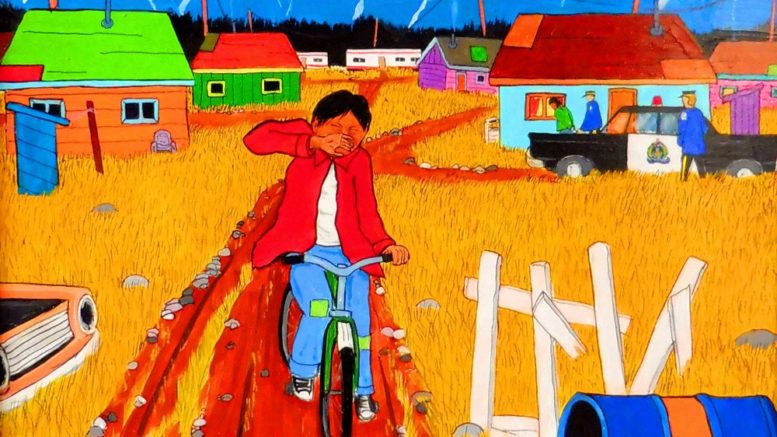 'Taking him away again' by Jim Logan is part of an extraordinary exhibit at the Bearclaw Gallery from October 19 - 30 in Edmonton. 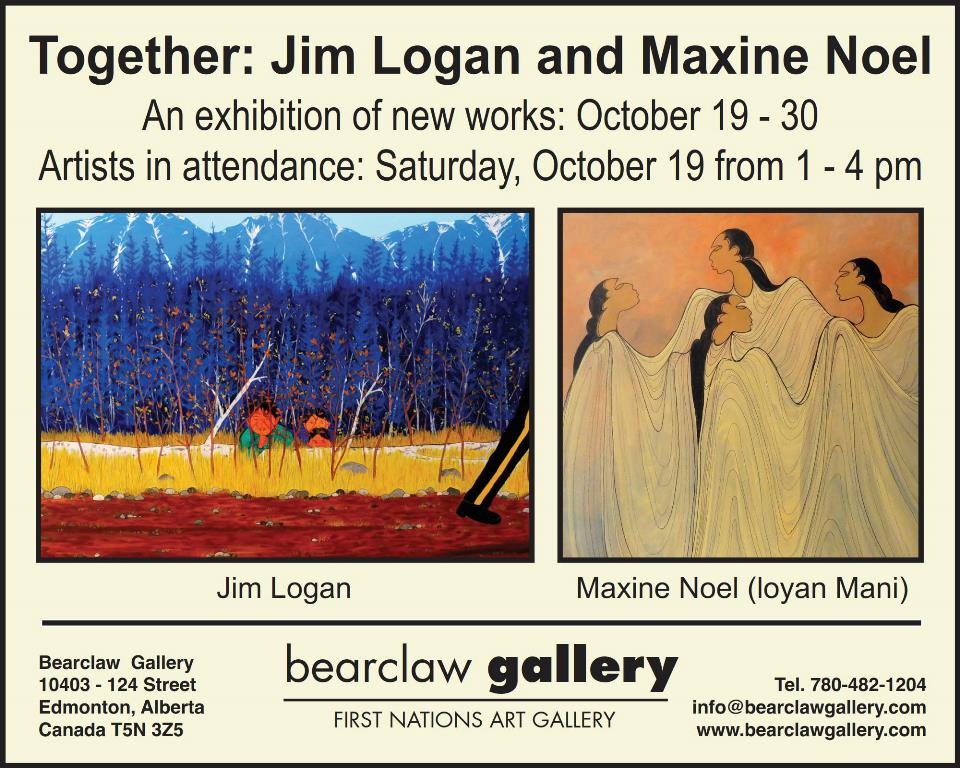 (ANNews) -The powerful image on the cover of this month’s Alberta Native News is by highly acclaimed contemporary artist Jim Logan, entitled “Taking him away.” His art is colourful and vivid in its descriptive style and iconic for its storytelling prowess.

Logan is one of the gifted artists whose new works are featured at Bearclaw Gallery in Edmonton from October 19 – 30, 2019. The other iconic artist featured alongside Logan is the great Maxine Noel (Ioyan Mani). The two artists will be sharing the stage at the gallery in a very special exhibition entitled “Together.”

“United we can help people understand that what the ancestors taught was the right way,” states Noel, while discussing the theme of the current exhibit.

“The Earth is not in harmony unless we respect and understand that all living things on this Earth are equal. We need to respect and care for each other and this Earth. The ancient secrets our ancestor knew to be right need to be known. The ancestors are waiting to teach us – together.”

A visionary elder gave Maxine Noel her Sioux name – Ioyan Mani – shortly after birth. It means to walk beyond – and walk beyond she does. Noel is a Santee Oglala Sioux, born in 1946 on the Birdtail Reservation in southwestern Manitoba. It was on her quiet reserve that she learned how to draw. 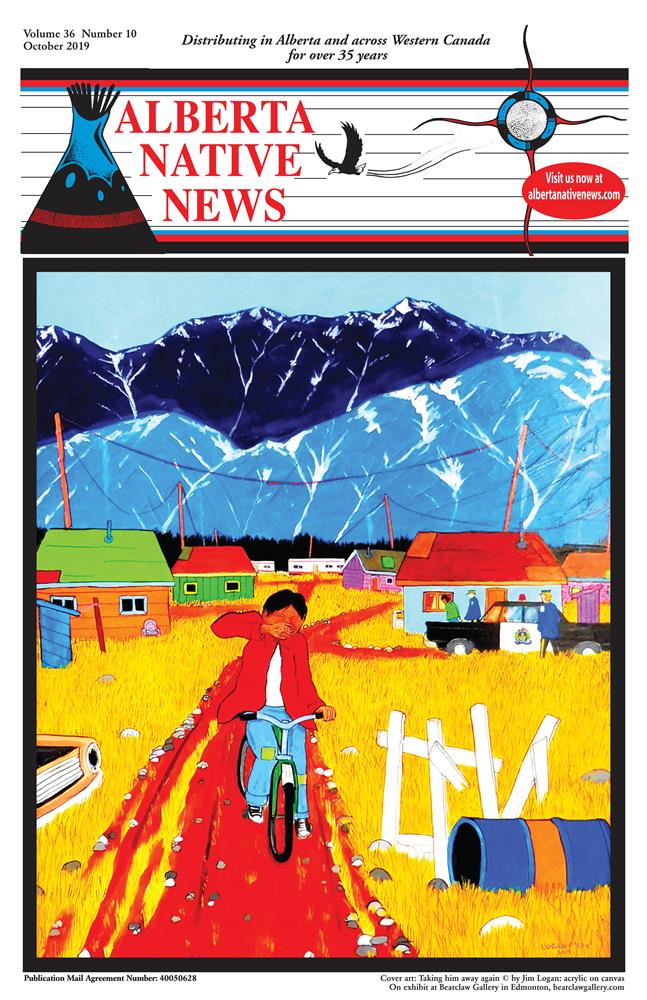 It wasn’t until 1980 that she was encouraged by a fellow Native artist to show her work to a Toronto art dealer. Since that first solo show, Noel has gone on to participate in countless exhibitions and she has dedicated herself to connecting Indigenous and non-Indigenous communities through art, culture and mentorship, often speaking to young people and committing her time and talents to various philanthropic boards and initiatives.

Noel utilizes a wide range of media in her work. Her subjects are young mothers, dancers, lovers and animals of the plains.

Her use of fluid images, flowing lines and subtle colours represent some of the essential characteristics she sees in First Nations people – a tone of sensibility, generosity and loving nature. Her presentation is fresh and modern, while still maintaining a spiritual quality. Delicate, flowing lines indicate a strength and serenity, while the simple composition and abstraction give her paintings a distinct character. Her images have been commissioned to grace walls in private and corporate collections, as well as reports, books, magazines and calendars.

Keeper of Knowledge by Maxine Noel is on exhibit at Bearclaw Galllery from Oct. 19 – 30.

Noel has been active with Artists Against Racism and she has lectured at schools in Ontario and Saskatchewan including Western University. She has worked with the Native Earth Performing Arts, the Canadian Native Arts Foundation and the Association for Native Development in the Performing and Visual Arts. She was also one of the first artists to work with the Canada and Africa Twinning programs with ISAID and CUSO.

In September of 2016, Noel was met with gratitude and praise for her contributions to raising public awareness about Missing and Murdered Indigenous Women in Canada. Her piece, “Not Forgotten,” which she gifted to the Native Women’s Association of Canada (NWAC), has made around $60,000 in royalties, which have been donated to the Sister in Spirit Initiative, an organization committed to educating and ensuring effective access to justice for families of missing Aboriginal women.

In January of 2017, Noel donated proceeds from her “Spirit of the Woodlands” collection to Dignitas International’s Indigenous Health Partners Program. She believes art to be a way of delivering messages and helping further good causes.

For her outstanding contributions Noel is a recipient of the Golden Jubilee Medal and was named to the Order of Canada in 2018.

Noel’s new works will be exhibited at Bearclaw Gallery alongside the brilliant art of Jim Logan, whose mission is using his art to depict what he calls the “Quiet Condition.”

“My art has always been about existing on the fringes of the mainstream where our lives are considered as nothing more than ‘wards of the state’ – a place of a sort of purgatory where we are confined and condemned yet not given any realistic chance to thrive. Yet in this condition we find our strength to resist, to keep our identity and to carry on. We live the same full lives as most but we live it with so much less.”

An easygoing, soft-spoken Metis, Jim is a skilled graphic artist, a missionary, and a candid observer of Native life in the North. Although originally from British Columbia, it was the time spent in the Yukon Territory that inspired his mission. The “Quiet Condition” he found there was the broad spectrum of life on a Northern Indian Reserve. The tenderness and love in his work, contrasted with alcoholism and despair, has shown Jim to be an accurate and painfully honest commentator of Native life.

Jim began to paint as a very young man, inspired by his mother, a hobby painter. He later studied graphic design at David Thompson University and the expressionistic work of artists like Edvard Munch and Van Gogh. He contrives to use his art as a graphic social comment as well as inspiration to many young Native artists. His honesty and sensitivity have earned him international recognition. Jim is undoubtedly an exceptional artist and a voice of his people.

‘Together’ will be on exhibit at Bearclaw Gallery in Edmonton from October 19 – 30. The gallery is conveniently located in the Oliver Arts District at 10403 124 Street. Check out their website at Bearclawgallery.com.

Be the first to comment on "Jim Logan and Maxine Noel featured ‘Together’ at Bearclaw Gallery in YEG: October 19 – 30"