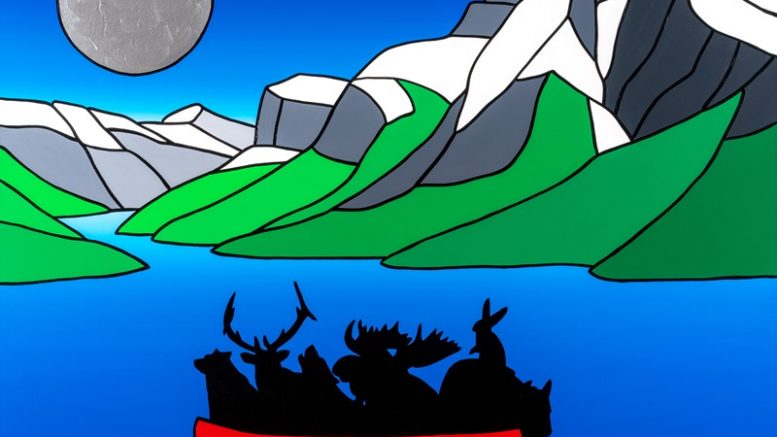 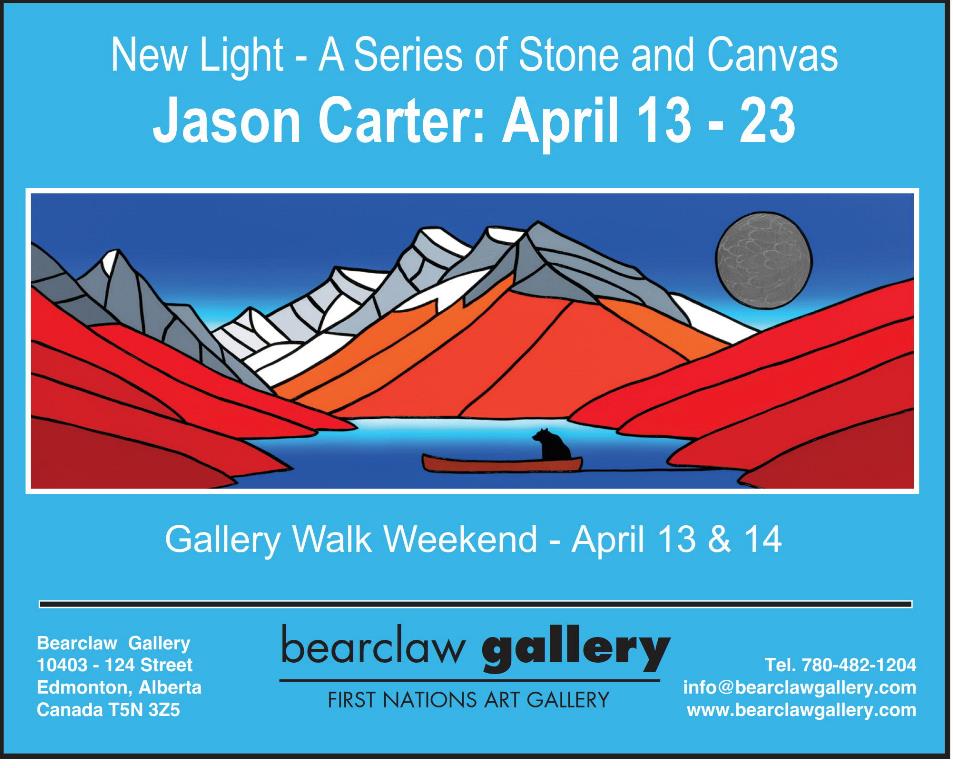 (ANNews) – The vibrant, yet serene image that appears on the cover of this month’s Alberta Native News is by one of Canada’s most acclaimed Indigenous artists – Jason Carter. It is absolutely breathtaking and Edmonton art lovers have an opportunity to feast their eyes on Carter’s art at Bearclaw Gallery from April 13 – 24.

The exhibit is entitled ‘New Light: A Series of Stone and Canvas by Jason Carter.” In his own words, the artist described the impetus for this new series and the wonderful relationship he has with colour.

“This past winter, I had the incredible honour to create a permanent painting installation for the Museum of Aboriginal People’s Art and Artifacts of Canada at Portage College in Lac La Biche,” explained Carter. “While up in northern Alberta, doing research on the incredible history of the school and the land, I also found inspiration in the sky – specifically the nighttime sky and the Northern Lights.

“It took me back to a time and place in my childhood, when I was up north on Little Red River Cree Nation and the Northern Lights would light up the sky. No matter the temperature or the time, my cousins and I would plunk ourselves in a huge snowdrift and watch the sky light up. It was as if everything was purple, blue, pink and green, even us! I had never seen such colours.

“I remember thinking so vividly, “How exhilarating is this new light?!”  It was one of my first memories of colour, the concept of colour and the power of colour. Little did I know that colour would become so important to me in my practice. Every canvas I paint, I consider the colour, and how I hope it makes one feel.”

Jason, a member of the Little River Cree Nation, is one of Canada’s most exciting and accomplished contemporary Indigenous visual artists, celebrated for both his paintings and his carvings. He had a solo show at Alberta House on Alberta Day at the Vancouver 2010 Winter Olympics. His work has been acquired into dozens of private collections (The Government of Alberta, The City of Edmonton, AFA, Rogers Media, Syncrude, The Shaw Art Collection, The Regional Municipality of Wood Buffalo to name a few) as well, he has had several exciting public shows, including the Royal Alberta Museum, Art Gallery of Alberta, The Art Gallery of Calgary and the Indian and Northern Affairs Public Art Display in Ottawa, Ontario.

Jason has been awarded numerous high profile commissions and in 2012, he created a 100ft x 7ft permanent installation for the Edmonton International Airport. He has also worked with The Wood Buffalo Regional Municipality and The City of Calgary on giant installations of public art.

Jason created permanent murals for the Amiskwaskahegan (Beaver Hills Park) in Edmonton and was one of three artists part of the LRT/SOUTH Extension beautification project. He illustrated his first Children’s book April 2011, “WHO IS BOO: The Terrific Tales of One Trickster Rabbit” inspired by his first carving of a rabbit which he called ‘Nanabozho’ (inspired by the Ojibwe trickster character). Since then, ‘WHO IS BOO 2: The Continuing Adventures of One Trickster Rabbit’ and ‘WHO IS BOO 3: The Spectacular Adventures of One Trickster Rabbit’ have been added to the enthralling adventure. He also completed an 18-painting series for the Art Gallery of Alberta as part of the T-REX Program called ‘Urban Animals’ which has been touring Alberta for 3 years, and he published a children’s book of the same name, ‘Urban Animals.’ He as well, opened the ‘World Of Boo’ in the BMO World of Creativity Children’s Gallery at the Art Gallery of Alberta through July 2015.

Jason’s masterful use of colour, bold lines and majestic scenery combine to create a powerful sense of humility and serenity. His animals are simply drawn but their personalities shine through – often whimsically. His large canvases are magnificent, and his small canvases are sweet and inspirational. Be sure to drop by the Bearclaw Gallery for a rare opportunity to enjoy the whole series.

Be the first to comment on "Jason Carter exhibit featured at Bearclaw Gallery in Edmonton: April 13 – 24"