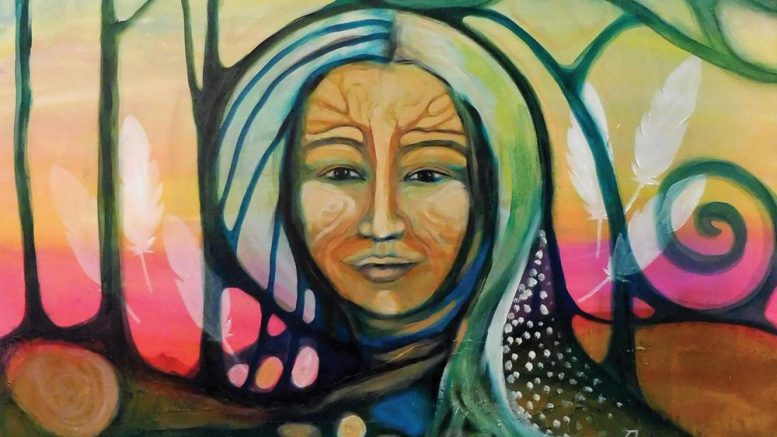 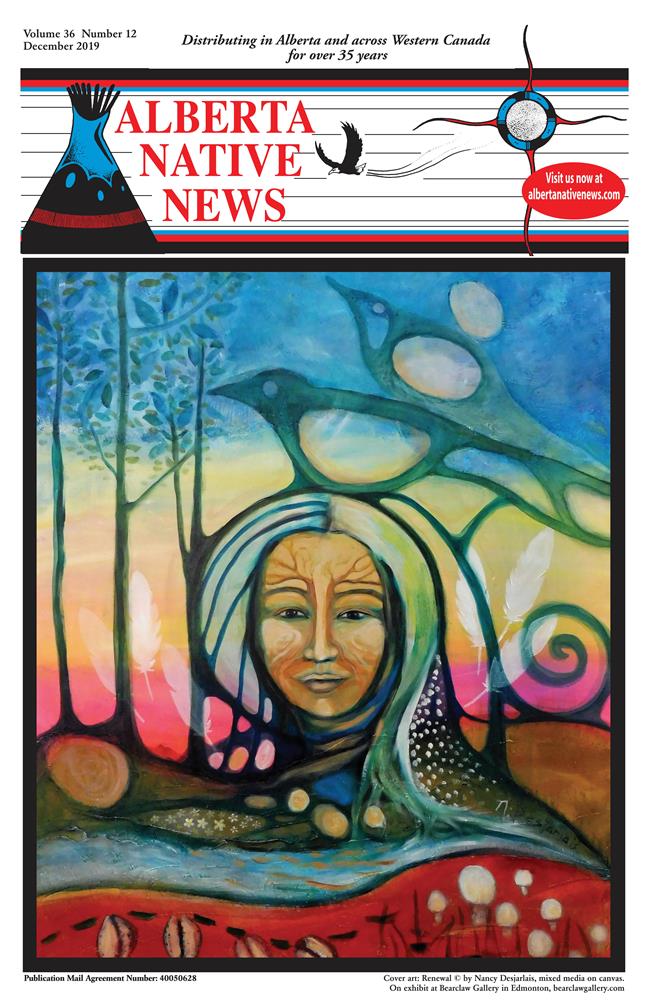 (ANNews) – The beautiful image on the cover of this month’s Alberta Native News is titled Renewal by contemporary artist Nancy Desjarlais.  The bold imagery against the soft pastel colours creates a peaceful ambiance for an aging Mother Earth to contemplate the renewal of her creations.

It is one of the new works by Desjarlais that is part of a special 2019 Annual Christmas Exhibition featured at Bearclaw Gallery in Edmonton until December 30, 2019.

“And all works can be taken at the time of purchase,” she added.

Artist Nancy Desjarlais is of Cree and Metis ancestry.   She spent her early years on the Fort McMurray First Nation Reserve #468.  This close connection with nature established a touchstone that could be retrieved in her journey through life.

Like many First Nations children, she was removed from her home.  She was put into a convent first, then foster homes.  Consequently, she lost her language and cultural ties.

Later, as she reconnected with her family roots, she was inspired to learn her culture through art and crafts.

“I was happiest when I was creating, whether it was sewing moccasins for my babies or painting a picture of a sunset.”

Nancy obtained her BFA from the University of Alberta in 1994.  Familiarity with modern art materials evolved into a series of textural paintings in which she incorporated and moulded sand and paint.  Petroglyphic and myth-inspired forms emerged alongside contemplative, meditative symbols.  Her images of the sky and stars reveal a cosmic-earth connection rich in spiritual energy.  As well, her relationship with the earth runs deep in her work.

Nancy has won awards in the Peace Hills annual Native Arts Competition. She has taught art to children and adults.  She has shown her work in B.C., the Northwest Territories and Alberta.

“Finding peace with my past, practicing daily gratitude, loving the earth, communicating a personal vision and travelling with a light heart are my main objectives right now, and art is my vehicle,” remarked Desjarlais.

Aguenus (Angela Hall), is a member of the Métis Nation and of Cree and Stoney ancestry, living in Stony Plain, Alberta.

Angela spent many years as a successful teacher, but when she discovered her gifts of art and poetry, she changed her focus. Inspired by the empowerment she experienced through creating her art, Angela was able to face and heal the wounds she carried from her experiences growing up in foster care. In order to help and inspire others to heal, she began graduate studies in Art Therapy.

Today, Angela paints for the joy it brings her and others. She strives to make her paintings multi-dimensional through bright colours and mixed media, simulating her experiences and feelings in the images she creates.

Jason Carter, a member of the Little River Cree Nation, is one of Canada’s most exciting and accomplished contemporary Indigenous visual artists, celebrated for both his paintings and his carvings. His work has been acquired into dozens of prestigious private collections; as well, he has had several exciting public shows, including the Royal Alberta Museum, Art Gallery of Alberta, The Art Gallery of Calgary and the Indian and Northern Affairs Public Art Display in Ottawa.

Jason has been awarded numerous high-profile commissions and in 2012, he created a 100ft x 7ft permanent installation for the Edmonton International Airport. He has also worked with The Wood Buffalo Regional Municipality and The City of Calgary on giant installations of public art.

Jason created permanent murals for the Amiskwaskahegan (Beaver Hills Park) in Edmonton and was one of three artists who were part of the LRT/SOUTH Extension beautification project. He illustrated “Who is Boo” a delightful children’s book series. He also completed an 18-painting series for the Art Gallery of Alberta as part of the T-REX Program called ‘Urban Animals’ which has been touring Alberta for several years, and he published a children’s book of the same name, ‘Urban Animals.’ He as well, opened the ‘World of Boo’ in the BMO World of Creativity Children’s Gallery at the Art Gallery of Alberta through July 2015.

Jason’s masterful use of colour, bold lines and majestic scenery combine to create a powerful sense of humility and serenity. His animals are simply drawn but their personalities shine through – often whimsically. His large canvases are magnificent, and his small canvases are sweet and inspirational.

To view the works that are currently exhibited, visit bearclawgallery.com.