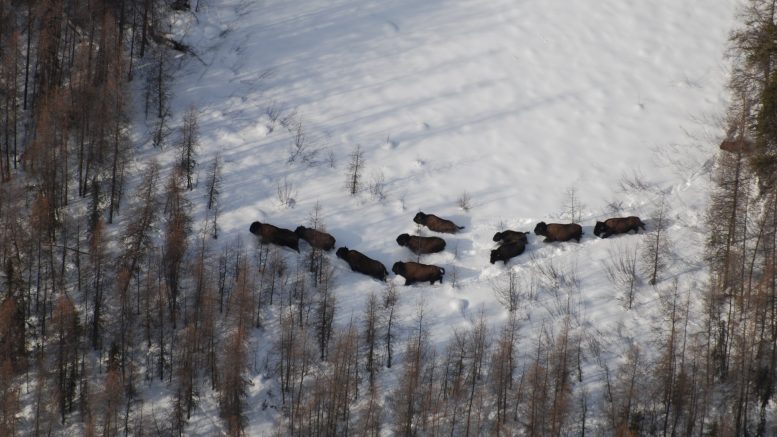 An important collaboration among governments, industry and Indigenous communities will conserve 166,000 hectares of boreal forest.

December 13, 2018 – An innovative agreement between Indigenous communities, energy companies and federal and provincial governments is expected to conserve more than 166,000 hectares of boreal forest.

The proposed Biodiversity Stewardship Area (BSA) would be designated a wildland provincial park. This would conserve natural landscapes and watersheds just south of Wood Buffalo National Park, protecting habitat for caribou, the Ronald Lake bison herd and other wildlife.

“Incredible things happen when industry, Indigenous communities and governments work together,” stated Minister of Environment and Parks, Shannon Phillips. “Thanks to this BSA, we will help sustain wildlife for future generations and build on what is already the largest contiguous protected boreal forest in the world.”

Discussions brought a consortium of industry stakeholders to the table with Indigenous peoples and the governments of Alberta and Canada. The province will now begin a 30-day consultation to protect the BSA by designating it a wildland provincial park.

“Moving the BSA forward is an important first step towards reconciliation and an initial milestone on the way to implementing the Nikechinahonan framework, which is the vision of Mikisew Elders and community that is critical to our cultural survival,” remarked Mikisew Cree First Nation Chief Archie Waquan. “It shows that positive things can happen in Alberta when industry and government listen to First Nations.”

“This is a great example of what can happen when we work together to protect important habitat for species at risk, such as caribou and bison,” added Catherine McKenna, federal Minister of Environment and Climate Change. “This is a major milestone in the creation and conservation of the BSA which will help us to reach our goal of doubling the amount of nature we’re protecting in Canada’s lands and oceans.”

Industry champions Teck, Cenovus Energy and Imperial played a vital role in discussions by agreeing to a voluntary relinquishment of oilsands and mining leases. The BSA will add an area that is bigger than the combined footprints of Calgary (825 sq. km), Red Deer (69 sq. km), Edmonton (684 sq. km) and Fort McMurray (60 sq. km).

“We respect the tremendous cultural and ecological importance of the boreal forest and of Wood Buffalo National Park,” noted Kieron McFadyon, senior vice-president, Energy, Teck Resources Ltd. “Teck is honoured to have worked closely with the Mikisew Cree First Nation to advocate in support of their vision for a unique new protected area, and to donate leases to help make this vision a reality.”

“Imperial commends the leadership by the Mikisew Cree First Nation to champion this initiative, which has resulted in a unique and voluntary collaboration to preserve this area,” added John Whelan, senior vice-president, Upstream, Imperial. “This is an area of high biodiversity potential that supports the ecological integrity of Wood Buffalo National Park and promotes the long-term stewardship of areas and resources that are critical to the continuation of Indigenous rights and cultures. Imperial is pleased to support this initiative.”

“We work hard to build and maintain strong relationships with Indigenous communities,” stated Al Reid, executive vice-president, Stakeholder Engagement, Safety, Legal and General Councel. “We are pleased to support Mikisew Cree’s initiative and the province’s biodiversity goals by donating a parcel of land to this proposed wildland provincial park.”

The new BSA will add to the more than 6.7 million hectares of contiguous boreal forest protected earlier this year through an agreement with oilsands producers, First Nations, the Nature Conservancy of Canada and provincial and federal governments.

Isolating to save lives in Northern Alberta First Nations