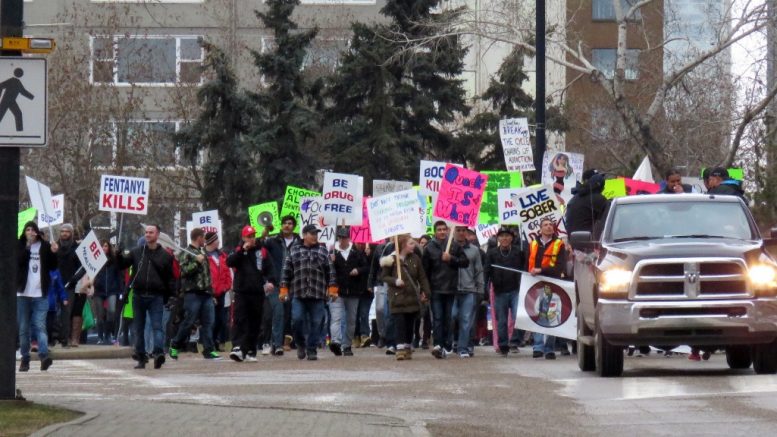 Sober Walk marchers make their way down 107 Street to the Alberta Legislature on November 15, 2018. 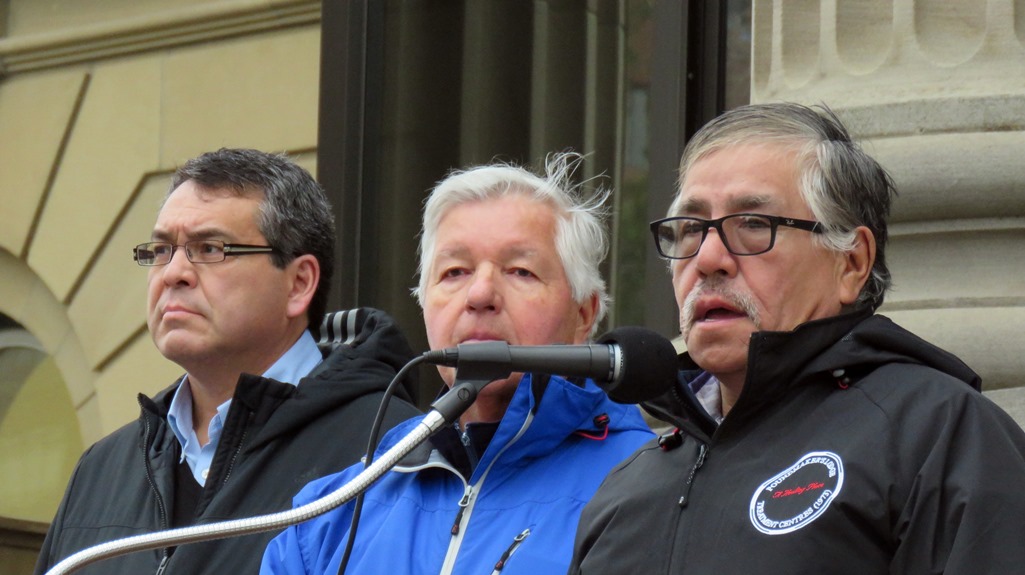 (ANNews) – On Thursday, November 15, 2018, St. Albert-based Poundmaker’s Lodge Treatment Centres (PTLC) hosted its annual Sober Walk in recognition of Canada’s National Addictions Awareness Week, an event initiated in 1988 to highlight addictions issues and talk about solutions to help address the harm created by alcohol and other drug-related addictions. The initiative gives Canadians the opportunity to learn more about prevention, to talk about treatment and recovery, and to introduce solutions for change.

More than 250 Sober Walk marchers joined the staff, Elders and administration of Poundmaker’s Lodge at the start point (Canada Place) before making their way along Jasper Avenue and down 107 Street to the steps of the Alberta Legislature.

As the long line of participants marched to the Legislature Building several speakers rose up the stairs and joined the host dignitaries as they prepared to deliver comments to the gathering. After an opening prayer by PLTC Elder Clifford Rabbitskin, emcee Lance Scout was introduced. 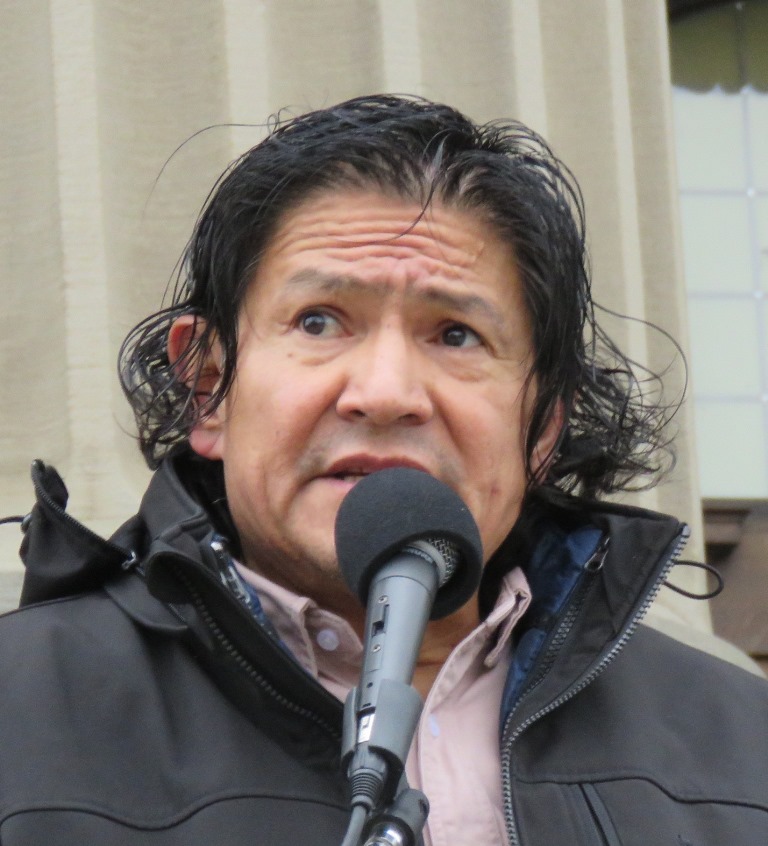 Scout carried the ball throughout the two-hour session of keynote and guest speakers, first explaining to the crowd why the Sober Walk is such an important initiative. He spoke about the importance of cherishing the Creator, of treating every person fairly and respectfully. He talked about his 18 years’ experience as a worker in health care, “where I worked to heal my people, where I felt their pain and realized their frustration.”

He spoke again about the Creator, thanked his blessings for his own sobriety and paid tribute to the Poundmaker’s Treatment Centre’s Board of Directors “for the outstanding work they do and the results they get when it comes to helping our people overcome addictions. I thank all the Poundmaker’s Board members, then and now and those to come. The programs and treatment model embraced by the Poundmaker’s Treatment Lodge Centres have made and are making a significant difference in the lives of many individuals.”

Poundmaker’s Board Chair Jim Brule was the first to speak. He thanked the many people who joined the march and participated in the annual walk and noted how proud he and the organization are to support and be involved in the Sober Walk and other important community events. He spoke about the road to sobriety and the ongoing effort involved in helping to make a positive difference in an individual’s life, and in turn, the unrelenting commitment it takes from those on the road to recovery and sobriety.

“It is only by supporting one another – by utilizing our abilities and embracing our philosophies to share, to care, to communicate, to treat one another with mutual respect – that we can move forward to a better life together.” 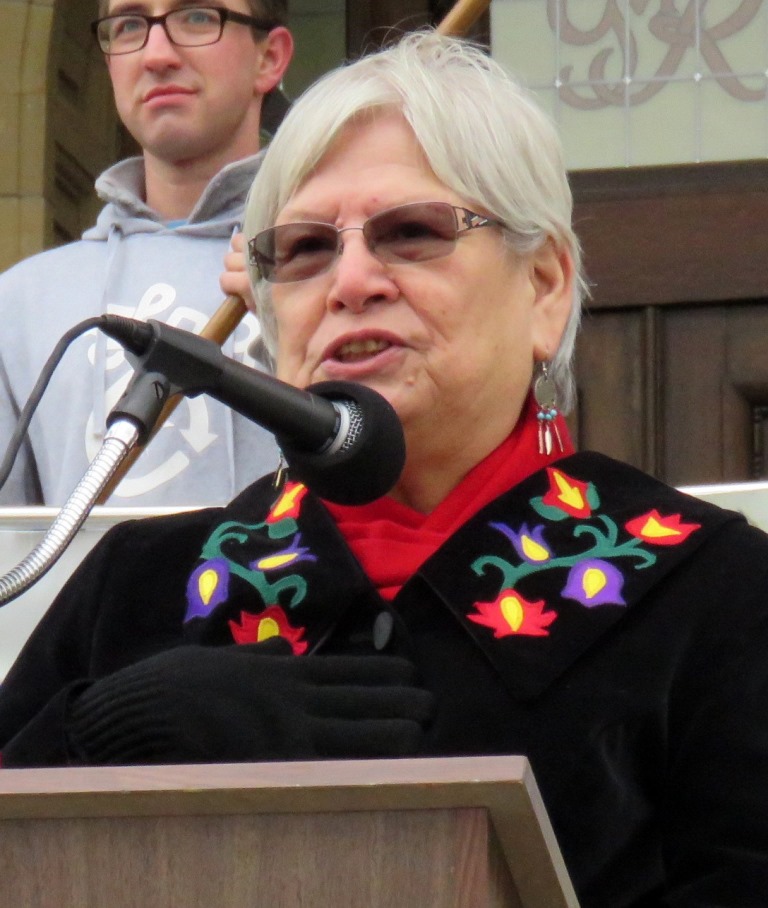 Elder Marilyn Buffalo, Chief Executive Officer for the Poundmaker Road-based Nechi Institute, spoke to the crowd and began by saying, “as a former executive member with the Native Women’s Association of Canada I cannot tell you just how proud I am today for your health, your strength, your courage, your sobriety and the life-changing choices you have made and that will carry you on to a very powerful journey. Get ready – because life is final!”

She went on to note that without good health, life is hard to enjoy.

Buffalo confided that “during the past three days here in Edmonton I have met with all the Alberta Chiefs (at a south side meeting). It’s a struggle with all the issues that we have to deal with when it comes to child welfare, health and education. We never have enough money to do the work we do.”

Buffalo received the support of the Chiefs at a meeting in south Edmonton and also spoke with federal Health Minister Jane Philpott. No commitment was forthcoming from government and Buffalo took the opportunity to remind those in attendance to consider all the issues before casting their votes next year.

“We have two elections next year,” Buffalo noted.

“One is federal, and the other is provincial, and your voice can make a difference. Be optimistic, be strong; go out to the meetings and ask your questions. Get the answers you need to make election decisions that benefit you. Don’t be silent because silence is consent; don’t sit in the dark when you can walk in the light and let your voice be heard.”

In closing she told the gathering to “work with me and remember – don’t ever quit, just keep moving forward.”

Marilyn Buffalo is a well-known, educated and highly respected member of Canada’s Indigenous community. A direct descendent of Yellow Mud Blanket, whose brother, Chief Poundmaker, signed Treaty 6 in 1876, Buffalo has more than 47 years of public service experience with Indigenous peoples and nations. As an Indigenous policy seeker, she has sought justice and equity for residential school survivors and has been active in areas that include community development, education, national and international Indigenous policy development, human rights, sports and recreation, justice, law, veteran and Elder rights, land rights, language rights and both economic and business development. A former Advisor on Native Affairs to the University of Alberta (appointed in 1975) she was also responsible for laying the foundation for the Faculty of Native Studies, Native Student Services; and created a format for all Aboriginal programming at the University of Alberta.

Buffalo was hired by the university in December 2016 on a temporary contract as a senior adviser on Indigenous initiatives in the Office of the Provost. Despite being notified of two-year contract renewal earlier this year, Buffalo’s contract was not extended, something Treaty 6 Grand Chief Wilton Littlechild said in an April 12 CBC interview “really sets us back in terms of advancing reconciliation through the highest level of the University of Alberta. It really flies against the reconciliation process in any post-secondary institution, not just the University of Alberta.” 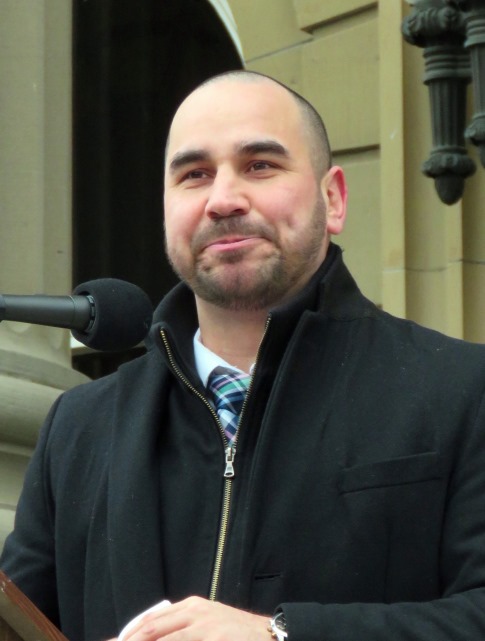 Jordan L’Hirondelle is a former client of Poundmaker’s Lodge; he spoke to the gathering about his four years of sobriety, his drug-free life, his accomplishments and his current status.

“I am very proud to say that I have been 1,776 days sober,” he began to an enthusiastic crowd as they cheered and applauded his recovery. “The most important day of those many days is today because what we do today will define who we are, who we will be and what we will become. 42 of those days I spent at Poundmaker’s Lodge and Treatment Centre.”

He spoke about the initial difficulties he faced, the demons he overcame and how, after just 10 days, he was ready to go home – cured.

“I realize now that I was wrong,” he emphasized.

Wrong choices and poor decisions, he said, led to his various crises.

“But once I accepted that responsibility, my life changed dramatically for the better.”

L’Hirondelle spoke about overcoming self-doubt, the importance of believing in oneself and how good habits are just as easy to acquire as bad ones. He encouraged everyone attending the Sober March to believe in themselves, to ask the Creator for guidance, to speak to the Elders and seek out advice from those who truly know the answers. He told the gathering that if you work toward your goals you can succeed.

“Today, I have a beautiful daughter, a beautiful son, a wife, a house, a dream car that I always wanted – and every day I say, hi! my name is Jordan and I am an alcoholic.”

Dr. Bob Turner, MLA for Edmonton Whitemud, has been a Professor of Medicine (Hematology and and Oncology) at the university of Alberta Hospital for more than 40 years. He spoke to the gathering and shared comments on behalf of Health Minister Sarah Hoffman and Indigenous relations Minister Richard Feehan.

“As a doctor I understand how difficult it is to be able to quit,” he said, lauding the accomplishments shared moments earlier by L’Hirondelle. “He is a hero and I know there are many more heroes out there; you can feel good about yourselves and I congratulate every one of you. 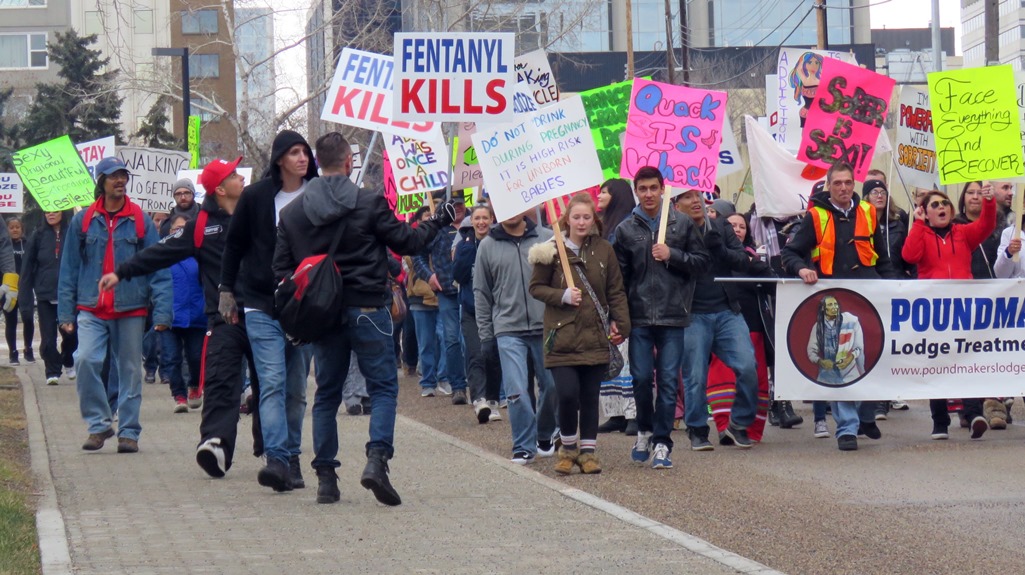 Marchers in recovery bear important warnings and messages about drug and alcohol addictions.

“Addictions is not a choice; it is an illness that requires support and services unique to each individual. We know that more than 60 percent of people with addictions and mental health issues do not seek the help that they need – because of the negative stigma and the complexity of accessing the health care system.”

He spoke about the ongoing opioid crisis and the need to work together to bring down the barriers. He spoke about the ongoing work being done by the Alberta government and its community partners to increase knowledge and introduce support programs accessible to every person suffering from addictions issues, programs that are currently working with thousands of people each year.

“We also recognize that First Nations and Métis people have higher rates of suicide” and that is all the more reason that “it is important that Indigenous people are able to access mental health services and that they are culturally appropriate.”

PLTC Executive Director Brad Cardinal noted that “the annual Sober Walk is an important event in that it recognizes the important struggles and the personal strength required when confronting an addiction – we have all had experiences in some way – each and every one of us.

“Maintaining recovery is very hard work so for those of you in recovery I just want you to know that we are here to support you on this very important journey you are on. Know that there is hope and that being clean and sober is possible.

“At Poundmaker’s we encourage clients to know their history because our history predicts our future. Knowing who we are helps us to develop our sense of self and where we choose to fit into the world. We urge you to learn about your history and your background and never forget who you are.” 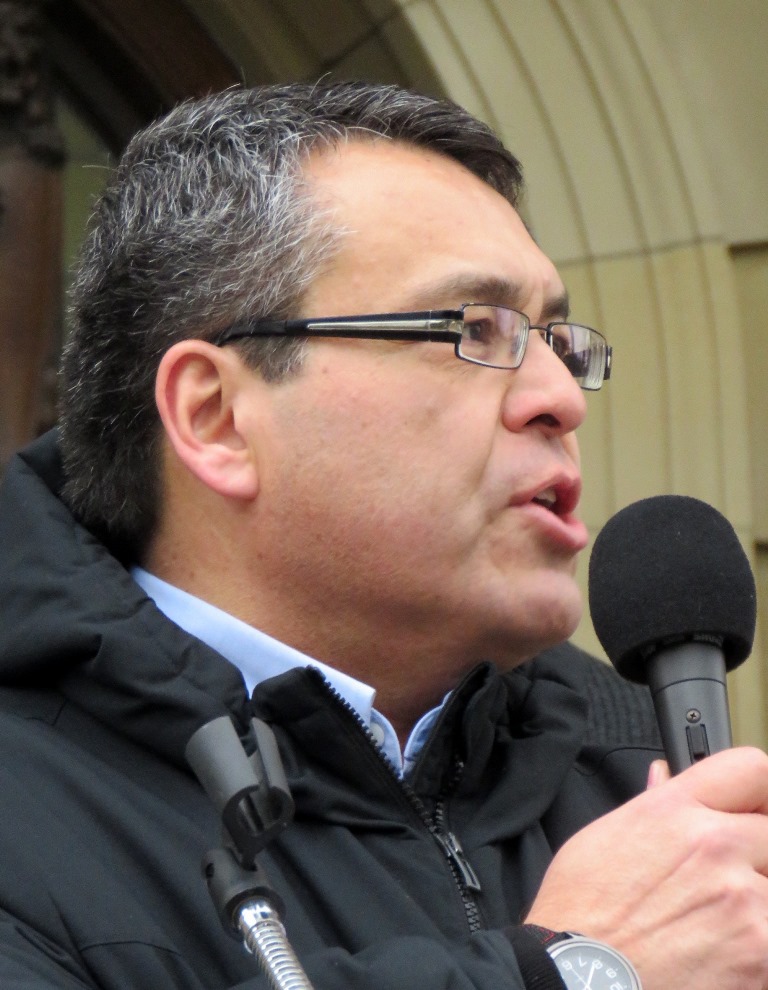 Cardinal went on the thank the caregivers, support agencies, mental health workers and others in attendance who are making a positive difference in the lives of others. He identified several agencies participating in the Sober Walk but questioned the sincerity and perseverance of those who did not come out to participate in one of Poundmaker’s most important social events of the year.

Poundmaker’s Lodge Treatment Centres (founded in 1973) prides itself on its 45-year history of providing exceptional addiction treatment services to Indigenous populations. The organization has strived to be a leader in bringing issues of importance to the forefront in both mainstream and Indigenous communities. They believe ongoing engagement through cultural ceremony significantly improves health outcomes amongst Indigenous peoples and strengthens Alberta’s health care system.

Poundmaker’s 2015 Powwow was an overwhelming success