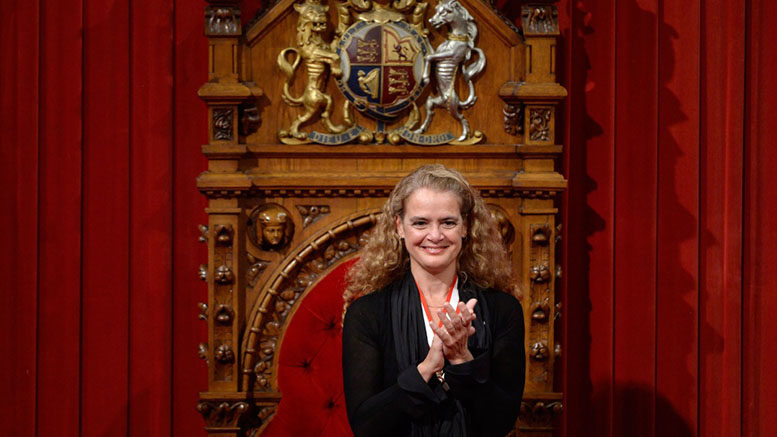 The resignation of Julie Payette leaves an opening at Canada's Governor General's office.

(ANNews) – In the wake of former Governor General Julie Payette’s resignation, many First Nations are calling for her replacement to be a First Nations person.

Payette’s resignation comes after an investigation into allegations of a “toxic workplace” at Rideau Hall. The Governor General position is currently being filled by the chief justice of Canada on an “interim basis,” said Prime Minister Justin Trudeau.

The Confederacy of Treaty Six sent a letter to the Queen expressing their concern over the vacant position. “The Chief Justice of Canada can sit in for a short period, but a concern arises when legislation is enacted that might affect us – what happens if the legislation ends up before the judge? It would be better to have a Governor General in place as soon as possible,” the letter reads.

“We wanted to remind our treaty partner – the Crown – of our concern that at this time in the state of Canada having no representative of herself,” said Grand Chief Vernon Watchmaker.

The letter also states that the Confederacy wants some input into the selection and mandate of the next Governor General.

“We want to engage in a process whereby our concerns are heard as the last three Governor Generals have not met with the Treaty Chiefs to hear our concerns,” said Grand Chief Watchmaker.  “When our ancestors entered into the Peace and Friendship Treaty No.6 with the Crown, it was to ensure that the Queen’s subjects would be able to live in our territories.”

The letter ends by saying, “It was out of this concern that we wrote directly to her Majesty as she is the head of state of Canada. As a Treaty partner, we have the right and obligation to address our concerns directly to her.”

Former commissioner of the MMIWG national inquiry, Michele Audette, believes that an Indigenous person in the position would be able to tell the real history of Canada and its Indigenous people. “To educate and promote and remind (people about) what Canada did and still does today,” said Audette to APTN, “whenever that person would travel or meet people on behalf of Canada.”

Audette also believes that the position could be filled by a First Nation, Metis, or an Inuit person.

Meanwhile, a regional chief for the Assembly of First Nations representing Saskatchewan, Chief Bobby Cameron, supports the appointment of an Indigenous person in the Governor General position, but only if it is filled by a First Nations person. “We are the only distinct group that have inherent and treaty rights,” said Chief Cameron.

After Payette resigned, Manitoba Grand Chief Arlen Dumas released a statement arguing that the appointment of a First Nation person “would send a strong message to the Treaty Nations that this government is sincere about its rhetoric on reconciliation and that there is no relation more important to the Prime Minister than the one with Indigenous peoples.”

In a poll conducted for Global News by Ipsos, it showed that over half of the Canadians interviewed believe that Canada’s ties to the Crown should end once the Queen dies.

Because the treaties were signed with the Crown, it is unclear what Canada ending ties with the monarchy would mean for First Nations people.