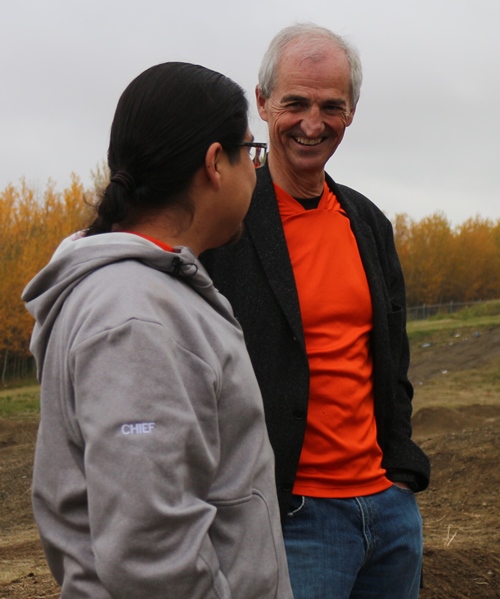 (ANNews) – Enoch First Nation Chief and council, educators, administrators, and most importantly the youth, were beside themselves with excitement on September 30th to celebrate the ribbon cutting that officially opened their newly-constructed bike park – largely inspired by marathon cyclist and advocator, Don Patterson.

For Patterson, it was the fulfillment of a vision he held for some time about contributing to healthy and active lives for Aboriginal youth. Patterson has organized numerous sports events over the years and takes great pleasure in seeing the outcome of his efforts, especially those delightful smiles and lit-up eyes of the children who are the recipients of such a blessing.

This particular project fell into place shortly after Patterson returned to Alberta following his recovery from an injury that forced him to cancel a marathon bicycle tour extending all the way from Inuvik, Northwest Territories, to the lowest land area in Canada, in southern Ontario. That tour was supposed to occur in July of 2015. 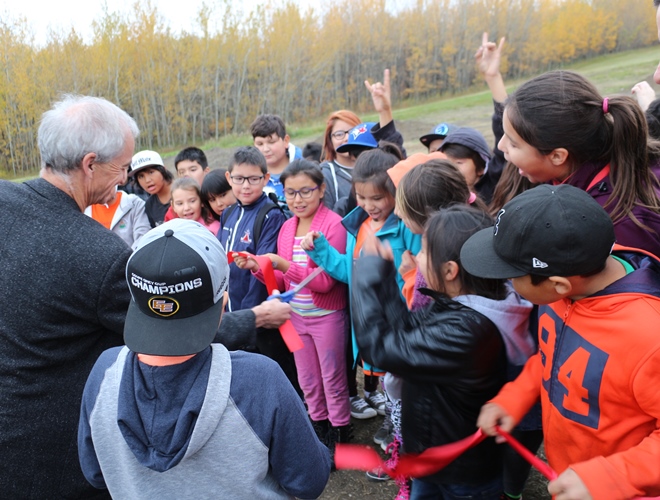 Upon his return, he started reconnecting with the Aboriginal community around Edmonton and ran into Mike Gladue from Enoch. Gladue was the individual who did a ‘Walk for the Nations’ to raise awareness of the plight of residential school students, Patterson explained. During the course of their conversation, Patterson inquired as to what he thought about the idea of developing a bike program and building a track at Enoch.

Gladue loved the idea. So did Patsy Steinhauer, their new director for education who responded, “Absolutely, let’s make it happen,” recalled Patterson. The same reaction was echoed by the kids Patterson visited at Kitaskinaw School on the First Nation. “They all raised their hands,” when posed with the same question he said. It seemed that anyone he raised the matter with wholeheartedly supported the concept.

Patterson found it kind of easy to get the support he needed for the project. After all, he said, “The people there learn about their traditions, their culture and also have a real love for their children.” That fact became all the more apparent when he approached the band council.

“I talked to Lana at the chief’s office and she said: Well write me up a paragraph so we can do a resolution.”

He dropped by the next day to ask how long the process would take and she came back with, “oh the chief already signed off on it.” And, so, the band gave up land about the size of a football field on the north side of the arena which signaled all things were a go.

The next stage required the physical equipment, things like dirt for the bike track, and bikes and helmets for the kids. With that in mind, Patterson got busy bringing in outside partners. One was Revolution Cycle in Edmonton’s west end “who designed this really cool track with jumps and turns.”

When he asked around the reserve about dirt for the track, “the guys at Enoch said: Hey, we’ve got dirt!” And when he also needed clay because simple dirt would be too soft and result in too much sinking, the said they could take care of that as well.

No sooner did Patterson ask when they could start bringing dirt, than they said, “tomorrow.”

For the next three weeks, they hauled load after load, after load for a total of fifty loads which required ongoing shaping and packing. “It’s been a great community effort,” he stated.

The other partner they needed was for the bikes and helmets. Through Canadian Tire and their Jump Start Program, he was able to get a commitment from the large chain. The YMCA helped him draft a proposal and they got funded within weeks. Thus, everything fell into place and the Enoch rec centre, he stated, will run the program with kids signing out the bikes and helmets. But that isn’t all. Far from it.

Now comes the real beauty of the bike program. “If the kids are out there, riding regularly, they can earn their bikes,” explained Patterson. Any child who becomes a regular participant in the program could have that opportunity by the coming May or June.

As for the off-season, winter Olympics cross-country skier Becky Scott “has a wonderful program for Indigenous youth in northern Alberta,” Patterson explained. “So, if we can get some coaching and some equipment, then the kids will be biking from April to October; then from November to March, when we have snow, they can be outside enjoying nature while cross-country skiing.”

The programs, he argues, helps them “feel better about themselves; they’ll do better in school and be better at time management.”

Enoch Chief, Billy Morin agrees wholeheartedly. “With the new technology, the kids are drawn into TV, computers, couches and iPhones,” he moaned. Don and other supporters, including the band’s youth department staff “are bringing back that physicality.” But the benefits of the program are not just the physical element he explained, but the “mental, spiritual, and emotional elements” as well.

“Our kids need that balance,” he concluded.

The kids also want a spray park and a skate park, he said.

Today it’s a vision, he expressed matter-of-factly, “but it’s going to be a reality.”