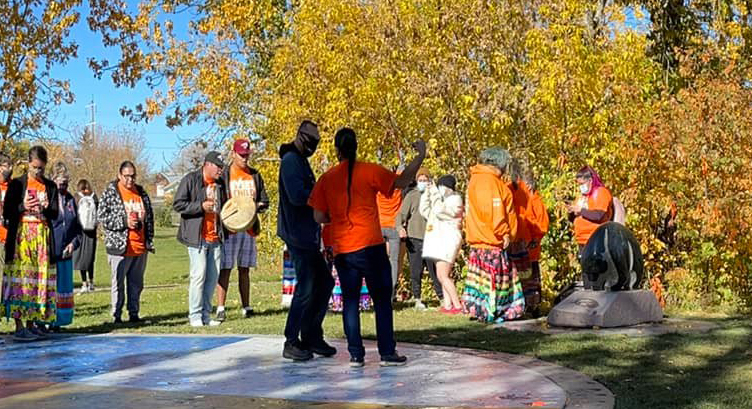 Trigger Warning: The following article contains overt discussion of Residential Schools which may be triggering and/or distressing to some readers. A national 24-hour Indian Residential School Crisis Line is available at 1-866-925-4419.

Enoch Chief Billy Morin said during the unveiling, “What’s so significant about today is this is going to be here for a long time.” 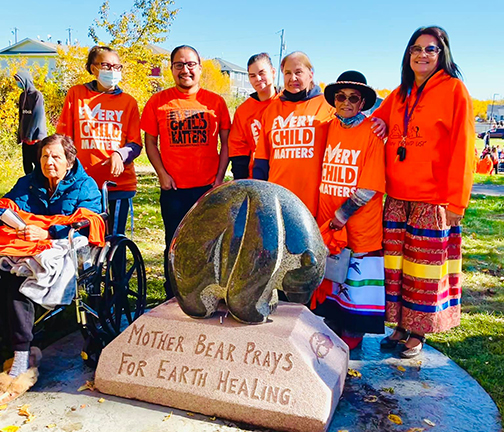 “The pain and hurts of residential schools have been here for a long time, and still will be, but if you can hear the laughs, if you can hear the kids playing, if you can see the beautiful space that we have, this is a reflection of how our community’s come together and is going to survive and thrive.”

The monument and walkway is located behind the Maskêkosak Kiskinomâtowikamik school in Enoch Cree Nation, which is approximately 15 minutes West of Edmonton.

“There couldn’t be a more appropriate place to be right at our school because our elders, my mushum and kukums, my grandfathers and grandmothers behind me, when they went to school they couldn’t sing, they couldn’t say the language, they were abused and now our kids are the complete opposite of that today,” said Morin.

The monument depicts a large medicine wheel cemented in the ground alongside a carved bear perched a top a stone slab.

Walter Callingbull, project lead and Elder, said of the monument’s creation, “There’s a bear that represents courage, strength, protector of her cubs and that is huge for me.”

“It’s been an honour to work on this project. It was a very heavy project for me — both my parents were in residential school. So, I grew up in a dysfunctional family, I grew up believing alcohol abuse was the norm,” Callingbull said.

September 30 is a day that has been commemorated since 2013 as Orange Shirt Day, which was created in honour of Phyllis Webstad, whose orange shirt was taken away on her first day of Residential School.

In other words, this was the first year in Canada’s history that had September 30th marked as a statutory holiday.

However, while Ottawa will be marking the day annually as a statutory holiday, it is optional for provinces and municipalities to do the same.

For instance, while Alberta decided to recognize the day, it was not a statutory holiday in the province. Fortunately, a number of communities, schools, and cities declared it as such.