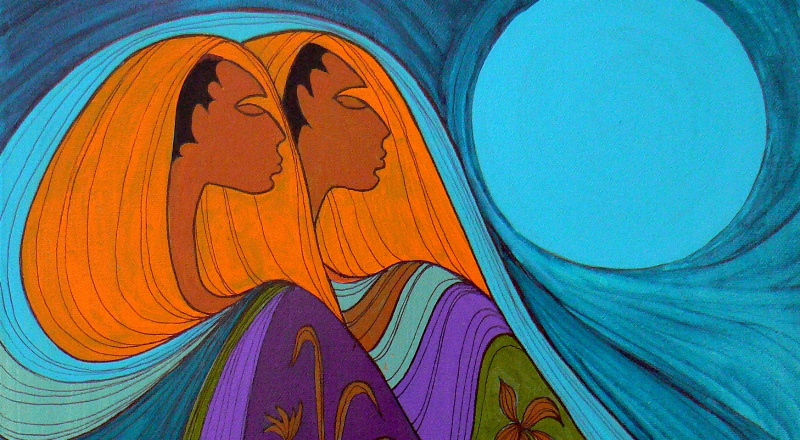 (ANNews) – The Bearclaw Gallery is currently in the process of hosting two very important but short term exhibitions that art patrons won’t want to miss. As this newspaper goes to press the gallery is opening its newest exhibition of art, The Resilience of Indigenous Women, a unique and new collection of work by Maxine Noel (Ioyan Mani), whose beautiful painting, Blue Moon, is featured on the cover of the April 2016 edition of Alberta Native News.

The Bearclaw is also simultaneously introducing the work of a new artist to the gallery, Nathalie Bertin, whose artwork has been featured on collector coins by the Royal Canadian Mint, in the Imago Mundi Collection in Italy and during numerous art exhibitions in galleries throughout Canada. The exhibit, which launched on April 16, will run until April 28.

The second presentation by the Bearclaw Gallery, Circles (verb) Circles (noun), features a collection of new work by the incomparable Cold Lake First Nations artist, Alex Janvier. The Circles Circles exhibition opens on Saturday, May 7 and runs until May 19; the artist will attend the opening day reception and will be available between 1-4 p.m. 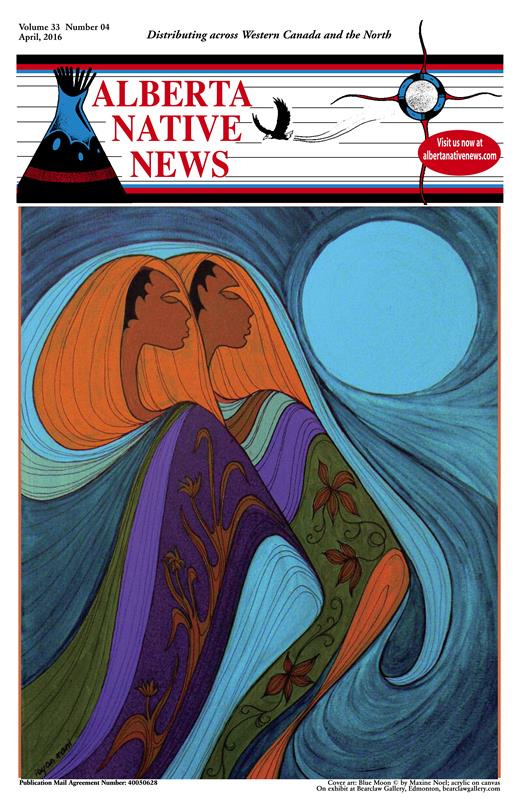 Maxine Noel is a highly acclaimed Manitoba-born Santee Oglala Sioux artist whose commitment to her culture has led to work with the Native Earth Performing Arts, the Canadian Native Arts Foundation and the Association for Native Development in the Performing and Visual Arts. Her stunning work is both colourful and visionary and filled with stories art lovers will surely enjoy interpreted in many ways.

“Art is the purest and truest expression of an individual…in it are all manners of things one is not always able to express verbally,” says Noel.

The eldest of 11 children, Noel spent her early childhood in a positive and nurturing environment where she received positive reinforcement from a loving mother and grandmother. That is also where she first began to draw. She worked for more than a decade as a legal secretary in Edmonton and Toronto but never forgot her roots or her ability to express herself through art. While working as a coordinator at a Native Friendship Centre in Northern Ontario in 1979, she was encouraged by a fellow Native artist to show her work to a Toronto art dealer.  They loved her art and within a year Noel had her first solo exhibition; since those early years she has participated in many exhibitions. 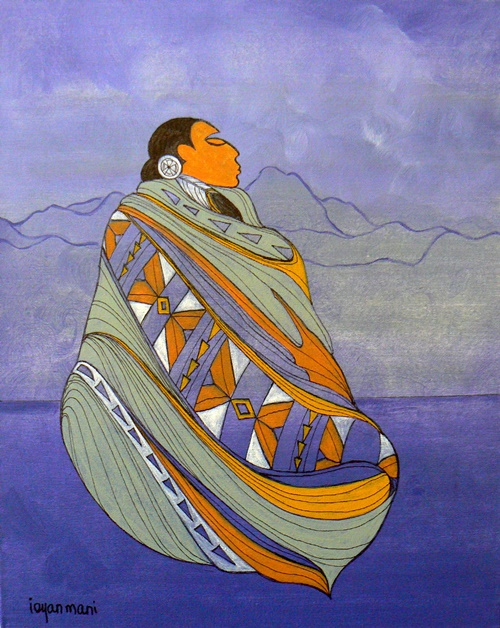 Teton Majesty by Maxine Noel is on exhibit April 16-28 at Bearclaw Gallery in Edmonton.

With her experience in design, painting, etching, serigraphy, stone lithography and cast paper, Maxine Noel is able to use a wide range of media.  Her subjects are young mothers, dancers, lovers and animals of the plains.  The strength and freedom she closely identifies with are depicted in her two favourite subjects, the eagle and the hawk. Noel’s use of fluid images, flowing lines and subtle colours represent the essential characteristics of Indigenous people – their sensibilities, generosity and loving nature. Her presentation is fresh and distinctly modern with mystical and spiritual qualities. The flowing lines indicate strength and serenity while the simplicity of composition and abstraction give her paintings a unique character.

Her images have been commissioned to grace walls in private and corporate collections, as well as reports, books, magazines and calendar.

Born in Toronto in 1969, Nathalie Bertin currently divides her time between her home studio in Newmarket, Ontario and her home-away-from-home in central Ontario’s District of Muskoka, a scenic and quiet community near Georgian Bay. Bertin, a multi-disciplinary artist whose style is often described as luminescent, energetic, bold and colourful, began to publicly display her art in 2009. She is also fond of strong shapes and textures. “I am more concerned about expressing feelings about my subject matter than recreating a technically realistic representation,” says the artist. 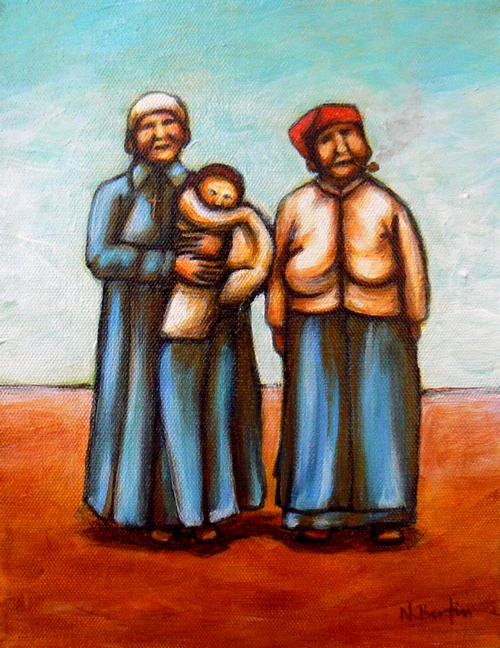 Morning Stroll by Nathalie Bertin is on exhibit April 16-28 at Bearclaw Gallery in Edmonton.

Bertin often incorporates elements of her French and Algonquin heritage in concepts that blend her two cultures. The land is also a common subject since it supports her physically and spiritually. “I am inspired by the art of my divergent cultures. My goal is to explore how my cultural connections and lifestyle interact with the natural environment that I live in and vice versa.”

A consistent theme in her work explores her life experience as a subsistence hunter. Her work can be found in collections of the Government of Manitoba, Government of Alberta, corporate organizations and private collectors across Canada, the US, Europe and Africa.

Beginning on May 7 the Bearclaw Gallery will host a series of new works by Alex Janvier. The artist explains this particular artistic venture by noting that “Circles are all around us. The continual flow of life takes us from infancy to young adulthood to middle age and into our elderly period.  It flows from generation to generation in a spiral of love. It is what some of my people have lost through the residential schools, that link to our parents and grandparents.  The love and the knowledge passed on through generations teach us of the circle of seasons; the animal migration and the cleansing of the lands.  My people knew the ways to exist in these cycles for all life to prosper and be healthy.” 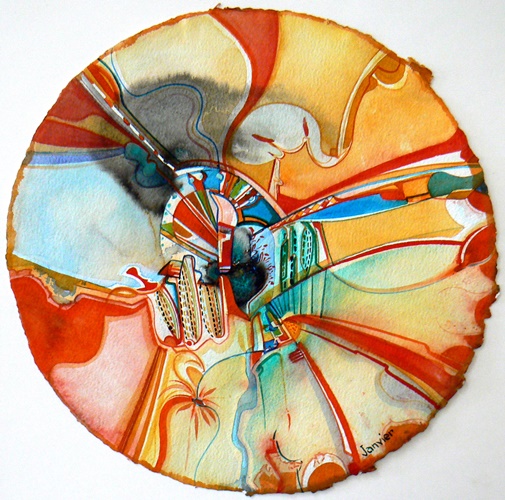 Special Space by Alex Janvier will be on exhibit May 7- at Bearclaw Gallery in Edmonton.

Although Janvier speaks of having a creative instinct from as far back as he can remember, he was actually given the tools to create his first paintings when, as a young child, he was forced to attend the now-defunct Blue Quills Indian Residential School. He credits his private tutoring in the summer of 1950, from Carlo Altenberg, with teaching him important artistic basics in respect to draftsmanship, dynamics of positive and negative spatial relationships and mastery of color. Unlike many Aboriginal artists of his time, Janvier received formal art training from the Alberta College of Art in Calgary, Canada, and graduated with honours in 1960.  Immediately after graduation, Janvier took up an opportunity to instruct art at the University of Alberta.

Be the first to comment on "Feature artist for April 2016: Maxine Noel"