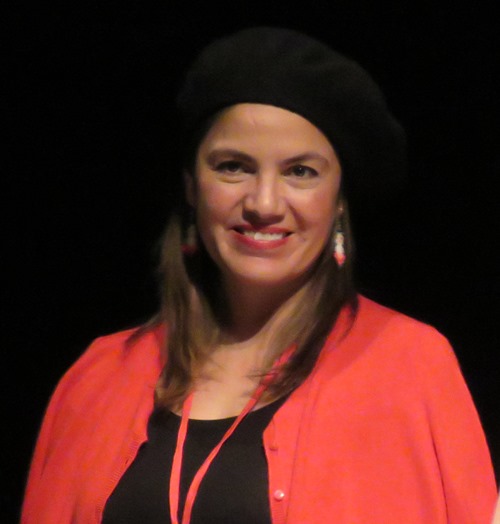 (ANNews) – On a bitterly cold Edmonton evening, as the city’s urban arteries were clogged with hockey-fans and those bound for MacEwan University to attend the Prime Minister’s address, a sizeable group of dedicated art enthusiasts packed into the Galerie Cité’s theatre venue.  Featured along with this year’s annual Flying Canoö Volant Festival, the gallery is thrilled to be hosting Pîkiskwe-Speak A Cross-Canada Touring Art and Film Installation.  The crowd reflected a diverse gathering of minds all wanting to partake in an intellectual dialog through art – the topic: reconciliation.

Acclaimed interdisciplinary artist Lana Whiskeyjack and celebrated documentary film-maker Beth Wishart MacKenzie graciously greeted many familiar faces and an even greater number of new ones, as visitors filed into a packed theatre for a special screening of Lana Gets Her Talk Back.  The thirty-seven-minute documentary follows Whiskeyjack’s creative journey exploring and reclaiming her cultural identity through memory.

“I first met Lana in 2012 while filming Gently Whispering the Circle,” explained MacKenzie.  “I met Lana during that project, and she showed me her sculpture Lost My Talk. It was so powerful, even at that early stage of its inception.  I realized that it was going to be an important teaching piece, and I thought that a documentary would be a beautiful way of bringing this forward.”

MacKenzie’s camera was there as Whiskeyjack assembled the materials of spiritual, cultural and historical significance that served as the building blocks for Lost My Talk, which eventually developed into a mixed-media triptych.  The three panelled, textured work is part sculpture and part painting and designed to hang vertically in suspension.  It tells the tragic story of Whiskeyjack’s late uncle, George.  The images are both mesmerizing and vividly haunting.  The centre panel is a clay portrait of George mounted on a piece of discarded wood that Whiskeyjack salvaged from the site of the residential school where her uncle was interned in his youth.  Whiskeyjack comments in the film that “it looks like a coffin.” 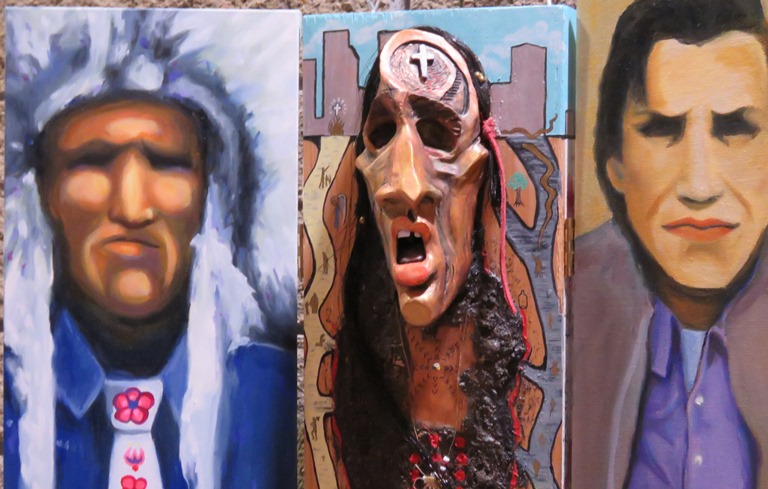 “Lost My Talk” by Lana Whiskeyjack is on display at Galerie Cite until March 31, 2018.

“I was fascinated with the way Lana used tradition – she was drawing on her culture and was successfully translating this into the ‘now.’  She managed to revalidate what had been lost: culture language and identity.  She really engages with the tools of her heritage to express herself in the modern world,” explained MacKenzie.

While watching Whiskeyjack’s artistic process and hearing her narrate the story of her inspiration and need to create, one is struck by the honesty of her pain, but also by the sincerity of her wit.  As she works with the piece, the camera follows her disciplined hands as she tells the story of how her uncle first earned his nickname – High Tower.  This humorous and endearing story about George resisting arrest while perched atop a water tower and Whiskeyjack’s most precious recollections of her handsome and charismatic uncle drinking tea with her in her grandmother’s cozy livingroom are balanced by the chronicling of George’s painful journey through life.  The piece is simultaneously a celebration of an extraordinary man, and a raw unveiling of generational injustices.

“One of the reasons I sought Lana out, is because I like my work to open people to greater understanding.  I try to bring major issues to audiences in a way where they hear concerns rather than close their ears to them, really drawing us all together to work towards healing.”

“It’s fantastic to see an audience enthralled by a thirty-seven-minute film about a woman in one room.  People don’t actually need things to be fast paced in order to be engaged,” observed MacKenzie with amusement.

Although the documentary is filmed almost entirely in Whiskeyjack’s studio, the closing sequence shows Lost My Talk arriving at the Galerie Cité in a fitting poetically-meta finale.

The exhibition will remain at the Galerie Cité until March 31, admission is free, and patrons will have the opportunity to watch Lana Gets Her Talk in addition to viewing Lost My Talk and many other captivating pieces.  The show will tour across Canada thanks to the Canada Council for the Arts’ New Chapter Program.

“The upcoming venues for Pîkiskwe are very diverse.  We’ve reached out to galleries, libraries with gallery spaces, community groups – basically anywhere where we can continue conversations about reconciliation,” MacKenzie elaborated.  “We are still working on ways to better engage remote and rural communities, there’s a real need for stories like Lana’s to be told without the confines of borders.”

Whiskeyjack says that Lost My Talk is a deeply personal expression and that she always intended to keep it following its Canadian tour.  However, thanks to MacKenzie’s film, audiences will continue to be able to engage with Lost My Talk long after it has returned home.