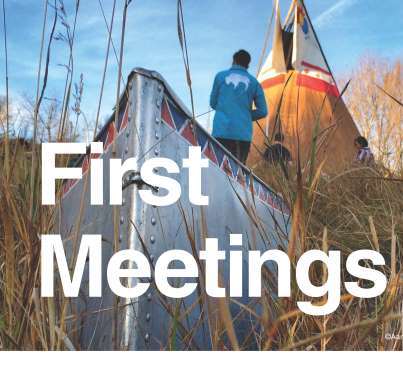 (ANNews) – Edmontonians are invited to take part in a unique and fun-filled experience that will give them the opportunity to both help recreate history and to become part of it.

The adventure begins at Whitemud Park (13204 Fox Drive) from 1 to 5 p.m. on Friday, September 1 and continues in Dawson Park (10298-89 Street) at the same time on Saturday, September 2. Dawn Saunders Dahl is spearheading the project and working alongside other artists, including Christine Frederick, Dawn Marie Marchand and Aaron Paquette. She said the goal behind the two four-hour river valley gatherings is to create a sense of realism and authenticity.

“We want to come as close as possible to creating a replica of what we would have seen had we been here when the first French voyageurs arrived in Edmonton and met the First Nations people,” explained Saunders Dahl. “We’re inviting artists from all genres to join with us as we create history. Create some art, take some photos, meet and work with our actors; the opportunities are limitless.”

The art, artifacts and photos collected will be part of the final project, an exhibition that will tell the story of what it was really like to live in the Edmonton area during the early 1700s. Amateur and professional photographers are welcome to attend; the pictures they submit will be considered for the exhibit and full credit will be given to every photographer or artist whose work is selected for inclusion in the exhibit. Actors will be on hand and dressed in the traditional clothing of the period – the idea is to set up scenes and take pictures that can be used in the final exhibit. 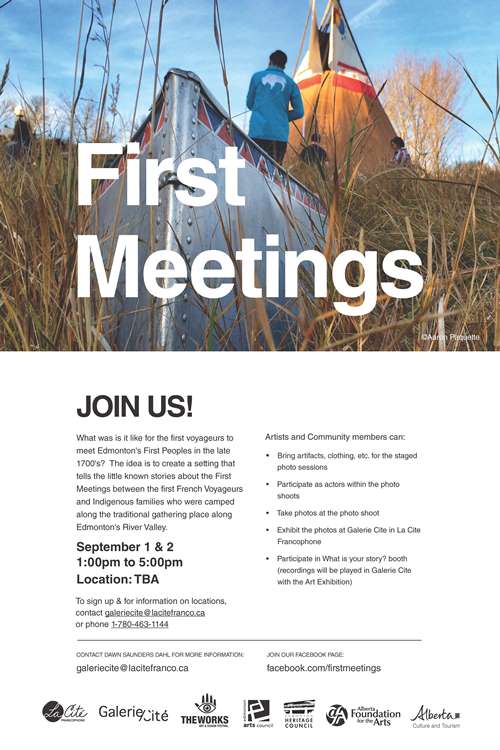 The photos and artwork created during the two sessions will be shown at the Galerie Cite in LaCite Francophone located at #110 8627 Rue Marie Anne Gaboury (91 St.) in Edmonton. The work chosen to become part of the final exhibit, which will be unveiled in December, will reveal what it was actually like to be a part of the Edmonton experience in the early 1700s.

“The idea is to bring an accurate accounting of the real story between the first settlers and the First Nations people,” explained Saunders Dahl. “We want to dispel the myths and tell the story the right way.”

It is yet another opportunity to give Canadians an accurate account of what transpired when the first French Voyageurs arrived in Edmonton and met the First Nations people who lived here. Many ideas and artwork of the first meeting have been portrayed in history as negative, scary and shown in an idealized romantic light.

“The project will stage a setting where French/European voyageurs first meet the Aboriginal peoples in their camps and villages. The idea is to create an environment that is closer to the true history of the first meetings, where First Nations people are portrayed as healthy, helpful and kind people who shared their resources with the men who had been travelling for months, and in most cases, were starving.”

The project has been about two years in the making and was initiated by Saunders Dahl, who was then employed by the Edmonton Arts Council.

“The idea first came to me when I saw a Facebook posting by local artist Aaron Paquette,” explained Saunders Dahl. “He was musing, wondering what it would have been like to live in that period of history. I’d been thinking about this same thing for a long time because I’d also like to know what it would have been like in the region when the first French Voyageurs met the First Nations people who were living here.”

“I was delighted when Dawn contacted me about following through on that idea,” noted Paquette. “It’s turned out be quite an exciting project and it is one that every Edmontonian can participate in. If you are an artist, photographer or a history buff, get involved in the initiative and relive some of the moments just as it would have been when the first voyageurs made their way down the Saskatchewan River and into what is now one of Canada’s provincial capitals.”

Clothing that depicts the fashions of that era are being created by local Ojibwa designer MJ Belcourt-Moses.

“Hopefully we will have enough props and outfits so that the images and themes we create along the river valley will give us what we are looking for – an authentic look at what it was really like to live here nearly 230 years ago.”

Saunders Dahl was a longtime employee at the Edmonton Arts Council and is known for the work she’s done at the popular Works Festival in Edmonton. She now lives in Canmore and travels back and forth to Edmonton in her quest to bring the project to fruition. The many hours of research conducted by the team has provided the project coordinators with the information they need to complete the project, a difficult task when the subject matter dates back to the turn of the 18th Century.

Artists and community members are encouraged to bring artifacts, clothing, and other related props of the era for the staged photo sessions. Participants are also invited to play roles as actors in the various scenes and the follow-up workshops and exhibitions at La Cite. There’s also an opportunity to participate in “What’s Your Story?” – a series of booth recordings that will be played in Galerie Cite, along with community exhibitions of the period.

The photo shoots will take place in Edmonton’s River Valley and the visual arts programming will be created at La Cite Francophone.

The Weapon Making Workshops are open to the public and are being led by Elder Saddleback and Costume Designers/Artisans at La Cite/Bonnie Doon Community League.

The photo shoots, led by the project’s lead artists and partners, will include a series of re-enacted scenes that will take place both day and night and will include sets such as Voyageurs on the river and in Aboriginal camps; these sessions are also open to the public.

For more information on this unique opportunity and to learn more about how you can participate, contact Dawn Saunders Dahl at [email protected].

Be the first to comment on "Join a reenactment of first meetings in historical Edmonton: Sept. 1 & 2"