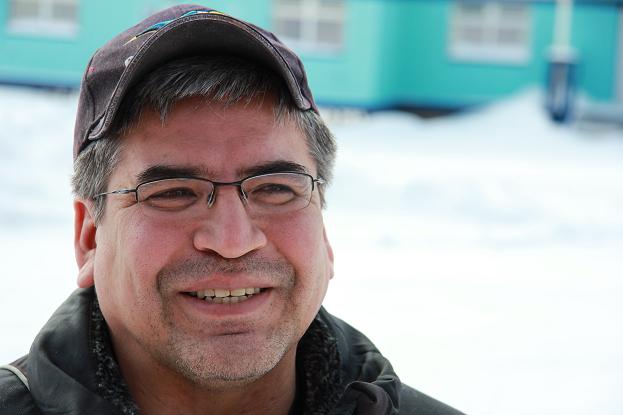 (University of Alberta) By the time the early 1990s rolled around, the once proud traditional hunting and fishing community of Déline, located on the shores of Great Bear Lake in the Northwest Territories, was in the midst of a cultural and societal decline more than four decades in the making.

“It went from being a place where people were strong and independent to one that has become dependent,” said Danny Gaudet, addressing the 2015 science and pharmacy graduates of the University of Alberta at the Northern Alberta Jubilee Auditorium June 4. “When I left home, we were very strong and independent, and we worked together as one.” 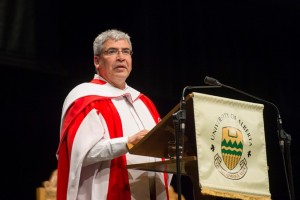 The first step in taking control of their community came when Déline, along with the neighbouring Dene communities in the Sahtu region of the Northwest Territories, completed the Sahtu Land Claim agreement, which provided the Sahtu members with title to lands, cash compensation and management rights over lands and resources.

The agreement also addressed the right to negotiate a single community government responsible for the administration of municipal services, land claim responsibilities and native affairs, which Gaudet, as chief negotiator, and a team of elders began pursuing in August of 1996.

“The task at hand seemed simple enough, and I did not think it would take that long—maybe two years,” said Gaudet, remembering the beginning of a process that would ultimately take nearly two decades to complete. “During the 18 years, there have been so many barriers, obstacles, situations and opposition to completing agreement. Some of those came from government, and in some cases, our own people didn’t want change.”

Leaning on advice from his late father George—“Never quit anything you start,” “Failures lead to learning and even success,” and, “If you don’t understand something, you need to listen and watch”—together with valuable lessons he took away from his time at a residential school in Inuvik, Gaudet and his team persevered.

“Déline, its members and elders have a simple approach to solving problems,” said Gaudet, who received an honorary doctor of laws degree from the U of A for his tireless advocacy for his community. “My father in-law, Morris Neyelle, always describes how a people, how a community will fail if it doesn’t work together. ‘If there is a boulder in the middle of the road, one person or small group might not move it, but together we can move it.’”

This community support helped Gaudet as chair of the Canada/Déline Uranium Table, which sought recommendations regarding injuries caused by the Port Radium uranium mine. It also helped him champion secondary and adult educational training programs to improve learning outcomes in the community, create the annual Déline ice hockey training program for youth involving the participation of former NHL players, and develop the Great Bear Lake Land Use Program.

Gaudet went on to say his people’s current system of governance is fragmented, as it “doesn’t allow us to be one, think as one, when it comes to the well-being of our community.”

“We needed to change the system, so that all our energy and resources go towards developing a culturally strong, independent, healthy, economically viable community. We can only do that by investing in our people, and providing them the tools necessary for them to achieve that. If we are successful at strengthening our community and members, then we can contribute to improving our region and this country.”

He added that the biggest challenge we are faced with is still yet to come.

“How do we balance the need to live in two worlds, the Aboriginal world versus the western world? The reality is that we can, through integration of Aboriginal culture, customs and beliefs into modern governance. This is another story that I will tell you when I get older.”

Gaudet said he hoped his story serves as a source of inspiration to the new graduates who also achieved success through their own hard work and commitment that has allowed them to set out on a path to achieve even more.

“You will have to lift many boulders; you can choose to do it alone or to rely on the strength of the community you have built around you. You can choose to keep learning from your mistakes, and to keep moving forward even when there are forces that try to stop you.”

Danny Gaudet is an inspirational Aboriginal leader who has worked tirelessly for the Déline community on the shores Great Bear Lake, a region where people still follow a traditional hunting and fishing way of life. He has served most recently as chief negotiator for the Déline Final Self-Government Agreement, which will create a single community government responsible for the administration of municipal services, land claim responsibilities and native affairs.

His achievements in the Sahtu Region of the Northwest Territories include serving as chair of the Canada/Déline Uranium Table, which sought recommendations regarding injuries caused by the Port Radium uranium mine. He also developed secondary and adult educational training programs to improve learning outcomes in the community, and created the annual Déline ice hockey training program for youth involving the participation of former NHL players.

He has served as chair of the board of North-Wright Airways, President/Owner of Déline Construction, senior advisor to the Indian Government Support Panel and chair of the NWT Community Mobilization Initiative.

by Michael Brown, University of Alberta

Be the first to comment on "From dependence to independence: Danny Gaudet inspires UAlberta grads"