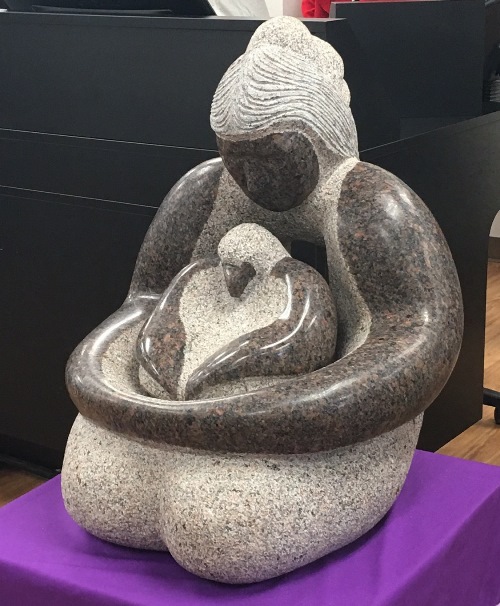 In his own estimation of his work Steinhauer writes: “I make my living carving stone, and am known as a stone sculptor, but I don’t call myself an artist. In the Indigenous worldview to which I subscribe there is a mysterious creative force driving through everything, and sometimes individuals get caught up in that creative energy and inadvertently make stuff.”

The sculpture, carved entirely out of granite, came to the University of Alberta thanks to a generous contribution from the Steinhauer family.  The piece will remain on display as a symbol of the lifelong pursuit of knowledge.

The much-anticipated introduction of Eaglechild to the Indigenous Gathering Space attracted a sizeable crowd of university faculty, community leaders and students.  The aromas of freshly brewed coffee and scrumptious bannock filled the room, which was packed to capacity.  A chorus of “ooh” and “ah” resonated audibly as Steinhauer’s Eaglechild made its first public appearance.  Onlookers were immediately seized by the sheer power of Steinhauer’s creation.  Although Eaglechild will be displayed alongside four other Steinhauer works, the emotions evoked by this particular image are profoundly captivating. 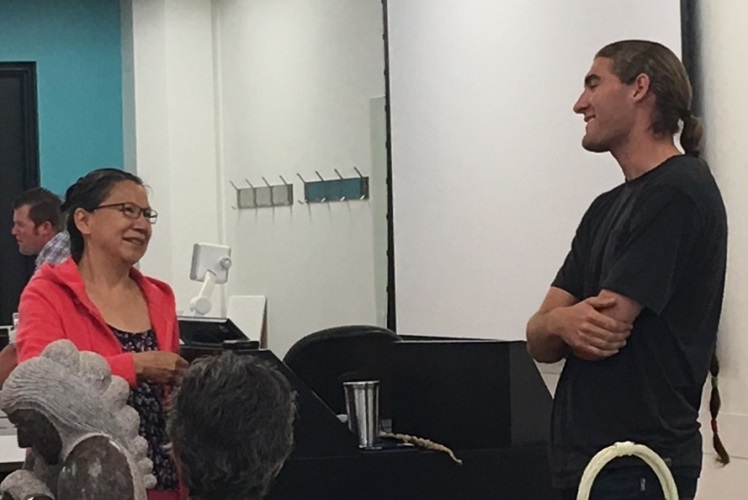 Ben Steinhauer and Dr. Diane Steinhauer unveiled the beautiful ‘Eaglechild’ at the inaugural event of the University of Alberta Indigenous Gathering Space on June 20, 2017.

“We need education to help our people,” said Ben Steinhauer, the son of Stewart Steinhauer, as he ascended the podium.  “We have a place here to work on partnerships” he continued in reference to the entirety of the Indigenous Gathering Space.  “My grandfather told me the story of Eaglechild, but you’ll have to excuse me, I’m not really much of a public speaker” he admitted bashfully as he passed the microphone to his aunt Dr. Diane Steinhauer.  “My auntie is a better storyteller.”  Dr. Steinhauer proceeded to unfold for the audience the story of Eaglechild and his journey of self discovery in pursuit of knowledge.

In the legend, humans are plunged into a world of darkness after losing sight of their traditions and taking their natural surroundings for granted.  Saved, after being hidden in a cave by his sister, there is only one survivor left to wander the Earth in search of answers.  Eaglechild does not understand his function in the world or why he is there and ventures out in search of his purpose.  After being sent on a journey taking him to the four corners of his world, Eaglechild receives the wisdom he sought for so long after encountering seven large rocks.  His ascension to manhood is marked by each rock explaining to Eaglechild the significance of one of the seven stages of human life.  From here Eaglechild opens four mysterious bundles collected during his travels to the four corners of his world restoring: light to the east, water to the south, plants and animals to the west and wind to the north.

This rebirth brought about by Eaglechild serves as a metaphor for the ongoing healing that is taking place in Canada’s First Nations, Métis and Inuit communities.  Just as Eaglechild ended the plague of darkness, many people of First Nations, Métis and Inuit ancestry are also struggling to gain more understanding of their own traditions and cultural practices.  The image of Eaglechild nestled within the embrace of a nurturing female form, is in fact the perfect representation to capture the spirit of the Indigenous Gathering Space.   “So that we don’t get lost, we will fill this space with reconciliation and work together,” Dr. Steinhauer explained after telling the story of Eaglechild’s long voyage.

The Indigenous Gathering Space is a new inclusive area, situated on the second level of the Faculty of Extension building in downtown Edmonton.  Steinhauer’s Eaglechild has found an ideal home surrounded by the inspiration of learning, sharing and coming together.  The University of Alberta hopes that the space will attract members from First Nations, Métis and Aboriginal communities in addition to students.

The designs for the space itself are the result of significant intellectual collaboration and culturally symbolic composition.  Bev Betkowski from the UAlberta News wrote on June 22 that “the Indigenous Gathering Space will serve as a teaching, ceremony and meeting space for community members and students. It was designed by architects guided by input from Elders, and reflects traditional Indigenous beliefs. The floor features a stained wood medicine circle at the centre of the room and includes traditional associations between colours, land-based teachings and the cardinal directions: red flooring to the south (the water), green to the west (the bear), white to the north (the air) and yellow to the east (the sun).”

Dr. Steinhauer and Ben Steinhauer concluded the afternoon’s unveiling by inviting the audience to come see Eaglechild up close.   Onlookers were encouraged to approach the sculpture from all visual angles.  Indeed, from various vantage points the piece reflected to the viewer different messages found within the legend.  From one angle the sculpture epitomized strength, from another the nurturing of innocence, from another the tranquillity of resolve.   Now Eaglechild now stands watch over the gatherers flocking to the Indigenous Gathering Space reminding visitors that wisdom is a journey, and that restoration (or healing) can only come through knowledge.  The impact of Steinhauer’s vision embodies more than the legend of Eaglechild, but a hope for future healing and spiritual reawakening.