The honorary titles are in recognition of all the hard work that Carry and Todd have done in their careers to enhance Aboriginal student success. The naming ceremony also recognizes BVC’s long and storied connection with the Aboriginal communities as the College stands on traditional Blackfoot land in the heart of downtown Calgary. These strong ties continue today with First Nations, Metis and Inuit students.

Working with our Aboriginal partners, the College has established educational opportunities that reflect traditional ways of life and ways of knowing, such as the Aboriginal Practical nurse and Aboriginal Addictions Services Counselling programs. BVC has also established the Iniikokaan Aboriginal Centre, which provides academic and program advising, elder counseling, financial advising for sponsorship, culturally relevant information sessions, and student gatherings. 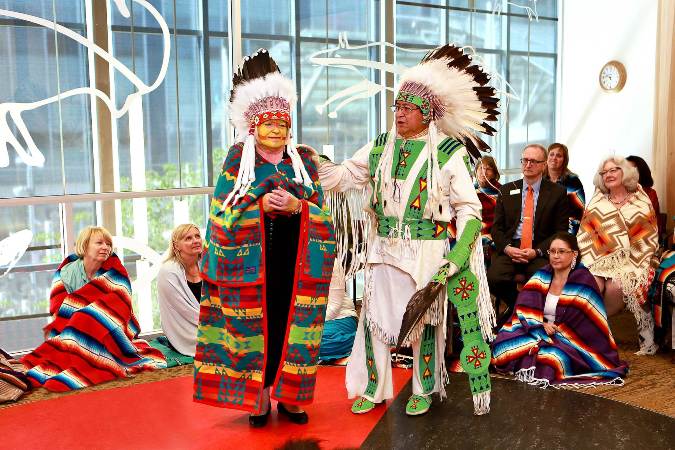 Bow Valley College President and CEO Sharon Carry was honoured to receive a Blackfoot name and other blessings to recognize her outstanding contribution to lifelong learning for Aboriginal students. (Photo supplied)

During the moving ceremony Carry was given the Blackfoot name Niipaitapi (nee-bah-tah-pee) Askinimatstohki (es-ksee-nee-maht-stooh-kee), which means Lifelong Educator. She was also presented with a Headdress which symbolizes leaderships and speaks to the accomplishments she has achieved for the Aboriginal community. Todd was given the name Aapainis (ah-ha-ness) Kimaakii (keem-ah-gee), which means White Buffalo Rock Woman. She was also presented with a Walking Stick, which symbolizes her known love of hiking and appreciation for nature.

“We are very honoured to be welcomed and adopted by the Blackfoot Confederacy. This spiritual and sacred Siksika ceremony will stay with me, long after we conclude today. I have been guided through a transformative experience – one that will influence and shape me for months and years to come. And one from which I will draw greater meaning out of life,” said Todd. 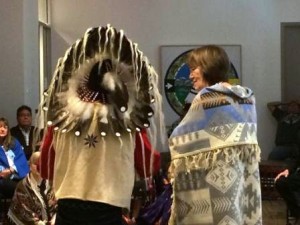 VP Academic Anna Kae Todd was also honoured to receive a blackfoot name in the ceremony.

“This is an important week for all of us. The journey toward reconciliation has only just begun, and there is still so much to address. Despite the fact that schools were at the centre of the destruction of communities, families, and individuals, First Nations’ remain firm that education can still be part of the solution. The names you’ve chosen for us reflect our commitment to education and our First Nations friends. We will work closely and in concert with First Nations leaders, communities, and agencies to address the Truth and Reconciliation Commission recommendations in which we can have an enabling and constructive role,” said Carry.

A Blackfoot name is an honour that can only be bestowed by an elder from the Blackfoot community. The ceremony was led by ceremonialist and Elder Leonard Bastien and Elder Peter Strikes With A Gun; and was attended by Carry and Todd’s family members, College Board of Directors and faculty, dignitaries, and government representatives.

Sharon has been President and CEO of Bow Valley College since 1997. Under her leadership, BVC has doubled enrolment; expanded its reach locally, and internationally; and increased revenues. Sharon gives back to the community, serving on the Executive of eCampus Alberta, and as faculty head for the National Leadership Development Institute. For her service in post-secondary education, she has been awarded the Centennial Medal, Queen’s Diamond Jubilee Medal, and has been invested into the Alberta Order of Excellence (AOE).

Anna Kae Todd, Vice-President, Academic and Chief Learning Officer at Bow Valley College, has extensive experience in post-secondary leadership, international education, and teaching. She has many years of professional and community service, and is currently a member of the Canada West Foundation’s Human Capitol Policy Council. She has also published a number of articles, given national and international presentations on collaboration in higher education, learning and teaching, leadership; technology integration in adult education, and been a faculty member for several leadership training institutes.