(ANNews) – The beautiful image on the cover of this month’s Alberta Native News is a soapstone carving entitled The Legend of Bear Rock by Dene carver Anthony Antoine. It is currently on display as part of a Summer Exhibit and Sale at Wakina Gallery in Edmonton located at Suite A, 10632 124 Street and online at wakinagallery.com.

Anthony Antoine, born in Fort Simpson, currently lives and creates his art in Edmonton. He is widely known in the city and across the province for his carvings – particularly of bears (both grizzly and polar) but also of iconic spiritual images and abstracts.

“The beauty of abstracts,” explains Antoine, “is that each carving is a unique, original piece of art. The stone itself dictates the creation that it will become.”

Anthony enjoys other forms of art such as drawing and sculpting with horns and antlers but the artist says that soapstone carving is his best way of expressing his creativity and spirituality. 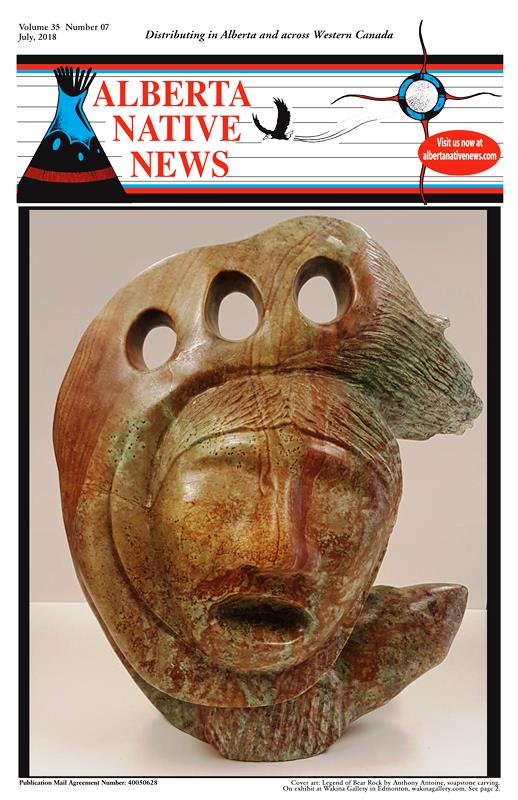 Anthony’s carving The Legend of Bear Rock depicts a well-known Dene legend with each element from the legend characterized on the carving. The legend is as follows:

A very long time ago when the world was new, a lot of strange things happened. At that time the most powerful medicine person was named Yamoria and he could communicate with birds and animals and shape shift into birds and animals as well. In this story, there were some giant beavers – the size of bears who were terrorizing Great Bear Lake.

When Yamoria heard about that, he went to Sahtu and told the people that he would chase the beavers away, so they could fish freely to feed their families. Yamoria turned himself into a beaver and started chasing the beavers around the lake. The big beavers immediately went down Sahtu De (Bear River) but the younger ones were harder to chase towards the river. During the time that Yamoria was chasing the younger ones around the lake, the bigger beavers had built a dam on the river near the Sahtu De Rapids. Yamoria got the younger ones to head down Sahtu De and then he chased all of them down the river. Near Tulita, at the meeting place of the two rivers, Sahtu De (Bear River) and Dehcho (Mackenzie River), Yamoria killed two medium beavers and one small one. He spared the lives of the larger beavers and they continued down the Great River, Dehcho.

After killing the three beavers, he stretched and pegged the three hides on the south face of KweteniÆaa (Bear Rock Mountain). The people in the community were now able to fish freely and feed their families and they thanked Yamoria for his help. As a reminder, Yamoria left an impression of the beaver hides that can be seen on that rock to this very day.

The Legend of Bear Rock is part of a collection of soapstone carvings, illustrations and paintings currently on display at Wakina Gallery – an online gallery that has a small showroom at the office of Alberta Native News – Suite A, 10632 124 Street.  The gallery specializes in art that has been featured on the pages of Alberta Native News over the past 34 years – including works by Bill Roy, Christopher Chambaud, and Roger Noskiye and early works by Linus Woods, Jane Ash Poitras, Isaac Bignell, Ernie Cobiness and Laurence Beaulieu.

Be the first to comment on "Feature artist for July 2018: Anthony Antoine"