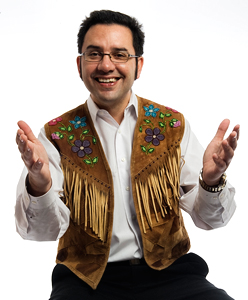 The Metro Federation is a consortium of four libraries: Edmonton Public Library, Fort Saskatchewan Public Library, St. Albert Public Library and Strathcona County Library. Each is a partner in this venture and will play host to a Writer in Residence over the coming 12 months.

The Metro Federation Writer in Residence program is wrapping up its fourth year, and 2016 writers Wayne Arthurson and Marty Chan will pass the torch at a celebration event on Thursday, Dec. 15 at the Strathcona County Library.

“Each Writer in Residence brings something wonderfully unique to the role, and EPL is anticipating many fun and innovative initiatives from David van Belle, EPL’s Writer in Residence,” said Pilar Martinez, CEO of EPL. “This program continues to expand both the minds and abilities of writers from all walks of life and with a variety of interests, helping established writers as well as those just getting started.”

Born in Amsterdam and raised all over Canada, David van Belle is a relative newcomer to Edmonton and will call EPL home for the whole of 2017. He is a playwright, director, actor and theatre deviser who has been Co-Artistic Director of Ghost River Theatre, an ensemble member of One Yellow Rabbit and playwright-in-residence at Alberta Theatre Projects.

“It’s an honour to be able to set up shop at the Edmonton Public Library,” said van Belle. “I’m looking forward to digging into Edmonton’s exciting writing and theatrical community. I’m fascinated by people’s lives and the ways in which they live them – and I know there are many stories in this city that can be told many ways.”

van Belle has created such works as BUZZ JOB! The True Story of Cal Cavendish with Kris Demeanor and The Invisible Project during a month-long residency at Calgary’s largest homeless shelter. He is also a recipient of the Lieutenant Governor of Alberta Arts Award, several Betty Mitchell awards and numerous other citations, as well as being a multiple nominee for the Gwen Pharis Ringwood prize in playwriting.

As the regional Writer in Residence, Richard Van Camp will split his time between Fort Saskatchewan, St. Albert and Strathcona County, with multiple-month stints in each community. An internationally renowned storyteller and best-selling author, he is a proud member of the Dogrib (Tlicho) Nation from Fort Smith, Northwest Territories. His work, which includes baby books, children’s books, comic books, graphic novels and films, has been translated into a variety of Indigenous languages and adapted for the screen.

“I’m thrilled to be this gypsy of a mentor who can help out in several locations during my residency,” said Van Camp. “I’m over the moon for this opportunity to share my 20 years’ experience with writers who want to hone their craft.”

Van Camp wrote for CBC’s North of 60 under their Writer Internship Program, and was a script and cultural consultant for four seasons. He taught creative writing and storytelling at both the University of British Columbia and the Emily Carr Institute. He has been a Writer in Residence before – spending 2011 with the University of Alberta and 2013-2014 with MacEwan University. Van Camp is currently shooting the movie Three Feathers in his hometown in each of the official languages of the South Slave Region: Dene, Bush Cree, South Slavey and English.

While in residence, each writer will devote roughly half their time to mentoring other writers and the other half to working on personal writing projects.

Local scribes can take advantage of numerous programs and workshops with both writers, and will also have the unique opportunity to work with them one-on-one. Those who want to book some time with either Writer in Residence can visit metrowir.com after Tuesday, Jan. 3, 2017 to contact them.