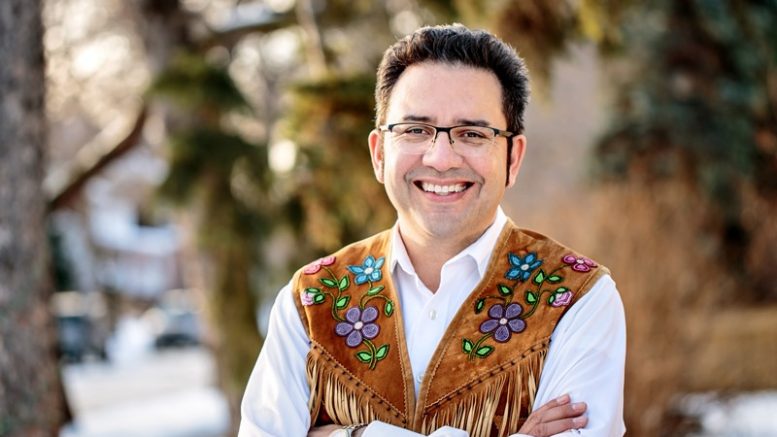 Author Richard Van Camp has been named Storyteller in Residence by the Calgary Public Library. He's offering virtual storytelling workshops during the month of June. (Photo by William Au).

Unfortunately, due to the pandemic, some of those things aren’t happening this year. But do not fear, Indigenous History Month goes on and we here at Alberta Native News have compiled some things that should bring a smile to your face.

In no particular order, here are five things happening with Indigenous Artists this month:

The Art Gallery of Alberta

The Art Gallery of Alberta is hosting an exhibit called: Halie Finney: The Ghosts of the Mink Make a Big Spirit.”

From the Lesser Slave Lake Region, but currently residing in Edmonton, Halie is an emerging Métis Artist. She graduated from MacEwan in 2014 with a diploma in Fine Arts and also received her degree from Alberta University of Art and Design in 2017 where she majored in drawing.

To give you a taste of what the Exhibition entails, here is an excerpt of its description:

Smoke can be a threat, a sign of danger of impending doom, or a happy signal that you can follow as it rises up on a summer evening to find friends and family gathered together.

You can see “Halie Finney: The Ghosts of the Mink Make a Big Spirit” from now until October 25, 2020.

To find out more about Halie Finney and her wondrous work, visit youraga.ca.

You may recognize the name Richard Van Camp as he is an award-winning author who has published five short story collections, six graphic novels, nine children’s books, and two novels, including the coming-of-age classic, The Lesser Blessed, which was adapted into a critically acclaimed film.

This month, storytellers and prospective storytellers are invited to attend a virtual workshop program with Van Camp. On June 17, at 6:30 pm he will be offering an introduction to storytelling where he’ll discuss the craft and basic elements of a good narrative and how to turn a tiny tale into a compelling whopper.

You can also book a 1-on-1 consultation with Van Camp. He is available to consult with storytellers of all ages to discuss story craft, delivery technique, or whatever aspect of storytelling you would like to explore.

On June 11, 2020 award-winning designer, artist, performer, and photographer Lance Cardinal announced the creation of a new 40’ mural celebrating the Indigenous peoples of the local Treaty 6 territory.

The mural is being commissioned by IKEA Edmonton as part of their new renovation and will be the first of its kind in all of Canada.

Cardinal stated, “This is such an honour and one that I do not take lightly… We will be working together as a team to create an educational and interactive representation of the Indigenous spirit.”

“This is such an exciting and well needed moment of collaboration, reconciliation and inspiration.” Lance said.

The House Gallery was established in 1974 to support Canadian artists and has since become a national leader in sharing the creations of Canada’s Indigenous artists with an international audience.

Join them in honouring Indigenous heritage and culture through this exquisite exhibition of curated artworks by some of Canada’s most prominent Indigenous artists.

To view the artwork, visit canadahouse.com.

Last on the list, but certainly not least, comes the 2020 Summer Solstice Music Festival.

The festival itself is free and will be broadcast June 21 on APTN from 6pm to 8pm ET/CT/MT along with some select radio stations. So, create some space this Indigenous Peoples’ Day and join the Summer Solstice Festival in celebrating our musical artists.

“Even while apart, we can still come together and celebrate our Peoples through performances from Indigenous artists across the country,” states the festival website.

Some of the featured performers include: Carolina East, Cris Derkson, G.R. Gritt, Julian Taylor, and many more.

For more information on the festival, you can visit aptn.ca/summersolstice.

Be the first to comment on "Indigenous History Month: Here are 5 things you should do to celebrate Indigenous art & culture"