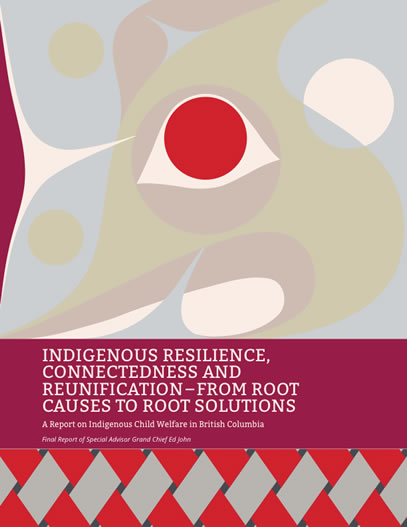 Coast Salish Territory, Vancouver, Dec. 7, 2016 – Leaders of the First Nations Summit (FNS) are once again calling on the Provincial government to bring in legislative changes that would see supports extended to children in care in BC being raised from 19 years old to 25 years old following the heartbreaking death of a 19 year old Aboriginal youth in Surrey.

The young woman, who had previously been in care of the Ministry of Children and Families, was found deceased on November 30, 2016 in a tent in Surrey. This is yet another tragic circumstance of a youth dying unnecessarily shortly after aging out of Ministry care.

For youth in the general population, the transition to adulthood is gradual and extended. However, in BC, children in care have no safety net – they lose their social workers and all government financial supports on their 19th birthday — leaving them on their own to navigate through life with little or no supports.  Further, many of the youth “aging out” of care have an increased risk of homelessness, school incompletion, unemployment, poverty, dependence on income assistance and persistent and unresolved trauma. In February 2015, FNS Chiefs in Assembly passed a resolution calling on BC to raise the age of youth in care from 19 to 25 years to address this distressing issue.

This request for action is also supported in the recent final report by Grand Chief Edward John in his capacity as Special advisor on Aboriginal Child Welfare.  In his report entitled, “Indigenous Resilience, Connectedness and Reunification – from Root Causes to Root Solutions: A Report on Indigenous Child Welfare in British Columbia”, Grand Chief John recommends the following;

Recommendation #55 – MCFD and DAAs commit to the following specific supports for Indigenous youth who age out of care:

The First Nations Summit will continue to engage with Premier Clark and Minister Cadieux to stress the need to deal with the issue of aging-out youth on a priority basis to create an environment that will help to avert similar deaths from taking place in the future.