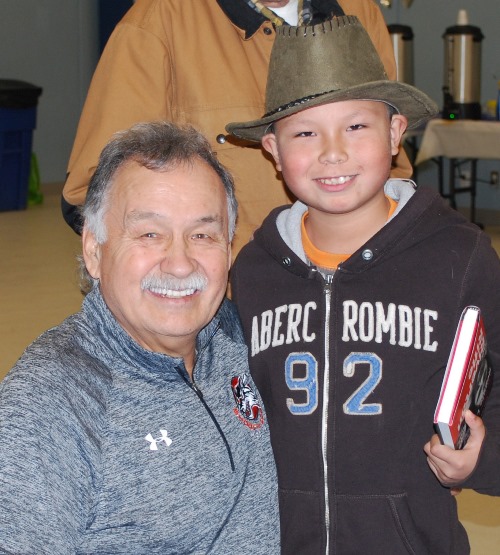 After weeks of anticipation, the day finally came for students, parents, school staff, elders and community members to meet former NHL legend and Indigenous role model “The Riverton Rifle” Reggie Leach. Leach, who played 14 seasons in the NHL and helped the Philadelphia Flyers win a Stanley Cup in 1975, was invited by Conklin Community School and the Conklin Community Enhancement Society to share his story and motivate students to work towards their dream. The proud member of the Berens First Nation in Manitoba began his visit interacting with staff and students at Conklin Community School. After speaking to students about his hockey career, making good choices and the importance of listening, he talked about the level of respect students showed towards him.

“What I saw is how good the teachers were with the kids and how respectful the kids were,” said Leach. “I had a wonderful day with the kids. We had a team picture and they [kids] drew pictures of myself and sayings of what I told them about listening. 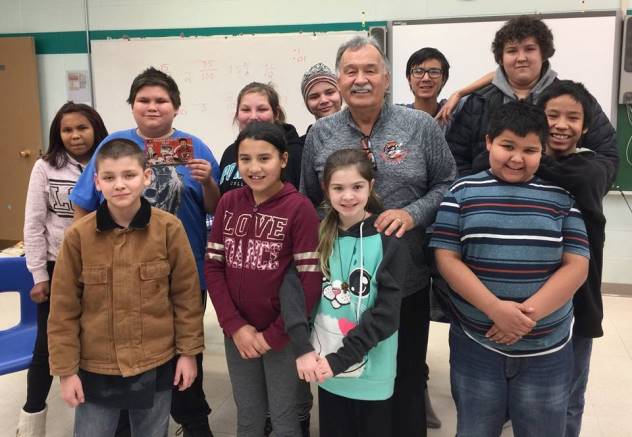 “To me I always tell them that you can’t learn if you don’t listen.”

After spending the day at the school, he joined students, parents, elders and community members for a stew and bannock dinner and a conversation. Leach talked about his day with the kids, his hockey career, personal battles with alcohol and people who guided him. He emphasised the importance of getting an education and the benefits of playing a sport.

“Sport is a good thing to keep them [students] straight and out of trouble but if you don’t have a good education it’s not going to help you down the line,” said Leach. “I speak about choices all the time. Kids today got to be responsible for their own actions.”

Leach had a little fun near the end asking trivia questions about his life and hockey career. Anyone who answered the questions correctly received a copy of his book “The Riverton Rifle: How Hockey Shaped My Life.” He stayed afterwards to sign books, take part in pictures and even let some touch his Stanley Cup ring! Principal Cal Johnson, who coincidentally played for the same junior hockey team as Leach the Flin Flon Bombers, says it was special to see Reggie interact with his students and community members. 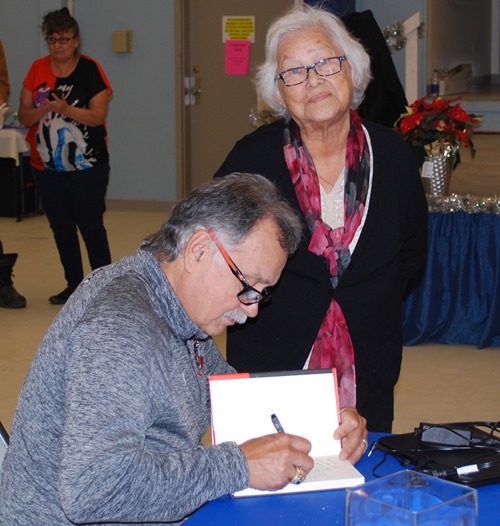 Reggie Leach – the Riverton Rifle – signs a copy of his book for Elder Alvina Bowen after a wonderful day in Conklin Alberta.

“Reggie was a funny, friendly and genuine guest who tended to change the subject when his NHL accolades were being discussed,” said Johnson. “He was however, very committed to talking about First Nations youth, education and family. Reggie was a hit with all age groups from our youngest students to our community elders.

“It was an honour and a pleasure to welcome Reggie Leach to Conklin and the Conklin Community School. We will all be watching Reggie when he plays against his son Jamie in the Stadium Series Alumni game between the Philadelphia Flyers and the Pittsburgh Penguins on February 8th. Thank you for the wonderful visit and the great lessons Reggie!”

When the night was all said and done, Leach says the best part about visiting communities is seeing the smiles on kids and the happiness they have.

Curtis Walty is the Communications Coordinator at Northland School Division No. 61.