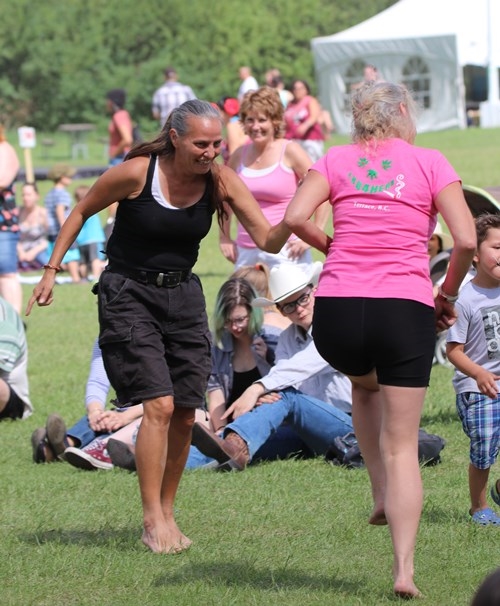 (ANNews) – There was something for everyone at this year’s Edmonton Indigenous Peoples Festival held on June 21 – National Indigenous Peoples Day. The one-day festival featured live concerts, bannock making, displays and interactive activities, as well as a vibrant powwow and artisan marketplace. It was held in the heart of Edmonton in the river valley’s beautiful Victoria Park.

The event was sponsored by the Canadian Native Friendship Centre along with the Edmonton Public and Catholic Schools, the City of Edmonton, Homeward Trust, RBC and the federal government.

CNFC Executive Director, Ron Walker directed the festival which was open to the public with free transit bus shuttles to the venue. Devon Bellerose did a great job as emcee.

The event kicked off with children’s events such as craft making, educational activities and a fabulous mini-powwow. 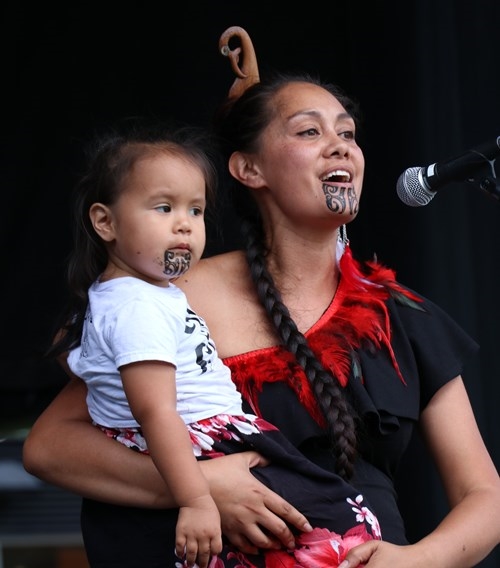 “The powwow was a really great event for the kids,” noted Walker. “There were a lot of youth participating as powwow dancers and it was a highlight of the day.”

There were a lot of familiar faces as many of them take part in the CNFC powwow program at Westmount School. “They participate in dancing and learn how to make their own powwow regalia,” added Walker.  “It was great to see so many kids from our program participating proudly and confidently in the powwow and at the festival. These kids are growing up with us and it’s really great to see them develop into such fine young dancers who are proud of their culture. It was wonderful to see the kids interacting so positively with the crowd that came out to enjoy the festivities.”

The concert segment of the festival began at 3 p.m., with several traditional songs from the New Zealand group, NGA lHl Nehua, an all-female ensemble that also included a three-year-old child who joined in on some of the singing. “This is how we retain and pass on our culture and language,” said one of the performers. “Our babies come with us everywhere and learn from us while we are on the road.” 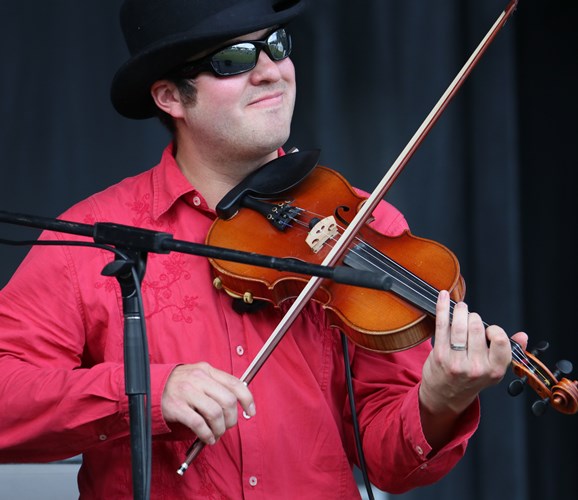 Fiddler Daniel Gervais was a treat for the ears with his footstompin jigs and reels.

The second performing artist was vocalist Brandon Baker and fiddler Daniel Gervais who offered up some original compositions – Louis Riel, and Gabriel Dumont – and some classics. Singing opera in both Italian and English was Jesse Gibney, accompanied by Kethra Stewart on viola/bass fiddle. Jason Gilday then picked up the pace before turning the mic over to the featured headliner for the day – three-time Grammy Award winner, Bill Miller.

Miller opened with the self-composed Chasing Birds before addressing his audience to express how thankful he was to be in Edmonton after surviving a heart attack a couple years ago that saw him “flatline” on his way to the operating room. He is also recovering from grief in the loss of very close family members. It has been a tough time for Bill, but Creator has helped him to move on. He also thanked those who prayed for his recovery, then sang a moving rendition of Praises in his Indigenous language. 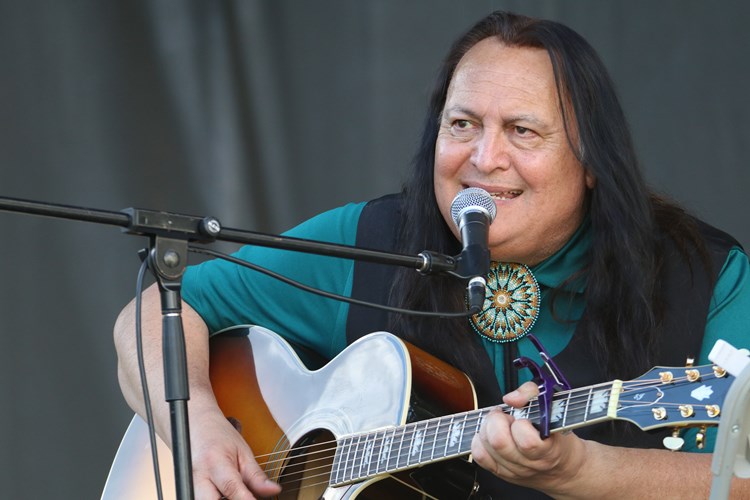 As he explained, “I’m praising God to be here (with you today) . . . I pray for the eagle, the visions and the dreams.”

In a later phone interview with Miller, he revealed that he’d had an out-of-body experience during his heart attack. It’s something he’s not shared with anyone else to this point: “I was in a room, not cold or threatening. It was golden brown, and I heard this voice say: I want you to see your life.”

Miller continued, “I didn’t want to see all the terrible things from the past. When I did, it was beautiful. I heard music, I saw pictures of all the good things – like my grad, my folks smiling and other things.”

He went on to explain how he first fell in love with the blues “in Chicago while going to art school there.” He was 18 at the time and usually into rock, country, folk, a bit of jazz and even Bob Dylan.

Miller then followed through with a rollicking blues instrumental number that was superb; a tune with feeling in it. 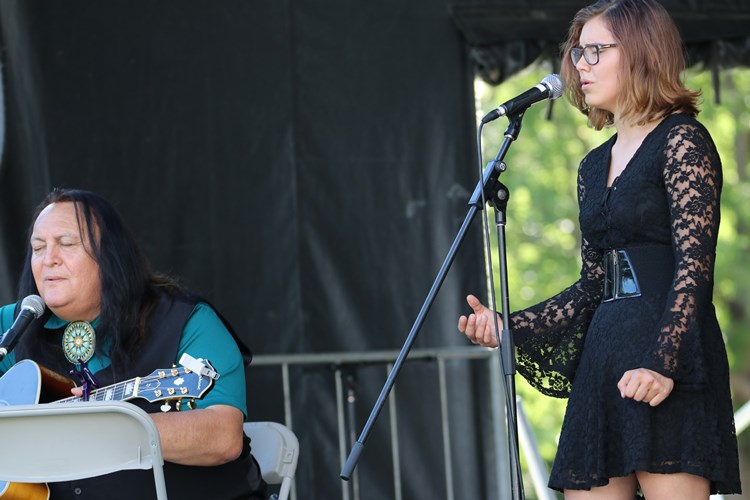 Originally from northern Wisconsin, Miller has been a resident of Nashville for some time now. Among his friends are such legends as John Prine, the late Jeff Buckley, Michael Martin Murphy, Vince Gill, John Carter Cash, Steve Earle, the late Waylon Jennings and his son Shooter, Roy Orbison’s son – Wesley, Willie Nelson and more. The man’s written hundreds of songs and continues on that path to this day.

Towards the end of his set, Miller called up Demaris Walker, daughter of the Friendship Centre’s director Ron Walker. Now it’s not often that a 15-year-old gets to share stage with a three-time Grammy recipient, but Demaris did. She not only sang solo, she also got to do a duet with Miller. 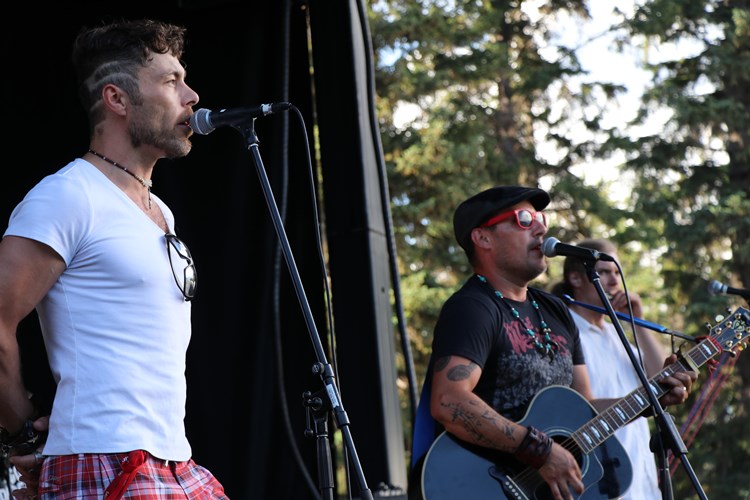 Singer Rellik and his band wowed the crowd and closed the show.

The final performer for the festival was Rellik who, along with his backup group, entertained for another 40 minutes or so before rolling up the carpet around 7:30 pm.

While the music played, the food vendors and craft booths were open for business and were quite pleased with the sales for the day.

Organizer Ron Walker said he felt positive about the event, that it was successful “with lots of sharing and a lot of diversity” in genres. There was definitely something for everyone and there is already a great feeling of anticipation for next year’s event. Edmonton’s Indigenous Peoples Festival is truly an event not to be missed.