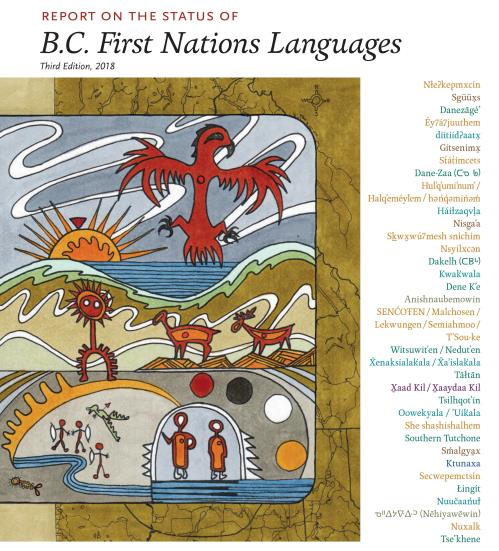 BRENTWOOD BAY, B.C. – A comprehensive survey of First Nations languages in B.C. reveals that all of the languages are facing severe threats to their vitality with the loss of aging fluent language speakers.

“B.C. is blessed with a rich diversity of Indigenous languages, which are an integral part of our shared national history and culture. Revitalizing these languages is important not only for Indigenous people but for all Canadians, and time is of the essence to revitalize them,” said Tracey Herbert, CEO of the First Peoples’ Cultural Council (FPCC), the organization that undertook the study.

“This research points to some encouraging trends, including the rise in children and young learners, that bring hope for the future of our languages. It’s a real testament to the many language champions, Elders, young parents and teachers, and their commitment to passing on their languages.”

The report gathered information from more than 137,653 First Nations people in B.C. Across the province, 34 unique First Nations languages and 93 dialects are spoken, more than any other province or territory in Canada. In 2018, only three per cent (3%) of Indigenous people in B.C. (fewer than 4,200 people) identified themselves as being fluent in their mother tongue language, a decrease since the 2014 report.

While just over half (52%) of fluent speakers are aged 65 and over, the vast majority (78%) of all language learners are young (between the ages of 0 and 24). There are also a considerable number of adult learners, including young adults and elders. The report attributes these positive findings to the growth of community-based language revitalization projects across the province.

“I’m very heartened to see the growing interest and efforts to revitalize languages in our First Nations communities,” said STOLCEL (John Elliott), a SENĆOTEN language leader and speaker. “Although there’s much more to do, it gives me great hope to see so many young ones learning their languages. It takes real commitment and effort on the part of our communities to do this work.”

Despite the decline in fluent speakers since the last report on B.C.’s Indigenous languages in 2014, there have been positive developments that have the potential to support a language shift. The federal government, in partnership with Indigenous peoples across the country, has begun drafting legislation to give all Indigenous languages official status, legal protection and increased support, as well as more and longer-term funding for community-based language revitalization initiatives, a move that responds to one of four Calls to Action on Indigenous languages in a report by the Truth and Reconciliation Commission of Canada.

Earlier this year, the B.C. government recognized the importance of Indigenous languages with an unprecedented $50-million grant to FPCC to support revitalization efforts across the province. The new funding, spread over three years, will allow FPCC to increase support to all of B.C.’s First Nations communities through larger and longer-term grants, the development of individual community language revitalization plans, and expansion of language immersion programs and learning resources.

“Our government is very pleased to support the growing number of Indigenous peoples who are teaching and learning their languages, because language is so important to connect people to their culture, their heritage and the lands they come from,” said Scott Fraser, Minister of Indigenous Relations and Reconciliation. “Both the United Nations Declaration on the rights of Indigenous Peoples and the Truth and Reconciliation Commission’s Calls to Action highlight the importance of Indigenous languages, and I am proud that our government is working closely with the First Peoples’ Cultural Council to make this critical work a priority.”

“Language revitalization work is complex and will not result in new fluent speakers overnight,” said Herbert. “But with increased support as well as significant, stable investment from all levels of government, effective language plans, and community mobilization, I’m optimistic that we can reverse the direction of language loss among B.C. First Nations languages and see them flourish again. We look forward to seeing the continued growth of our languages.”

The third edition of the Report on the Status of B.C. First Nations Languages provides concrete data on the vitality of languages in B.C.’s First Nations communities, including changes in the numbers of speakers and learners over time, and resources available to support each language and community efforts to stem language loss. The goal of the report is to provide information to First Nations communities and leadership and all levels of government to assist with Indigenous language planning and revitalization. The last report was published in 2014 and the first ever report was published in 2010.

United Nations Declaration on the Rights of Indigenous Peoples recognize that knowing and being able to speak one’s language is a human right for Indigenous people. Both outline the need to protect and invest in the restoration of Indigenous languages as a concrete step toward reconciliation.

Be the first to comment on "Report Shows Increase in BC First Nation Language Learners, Urges Action"