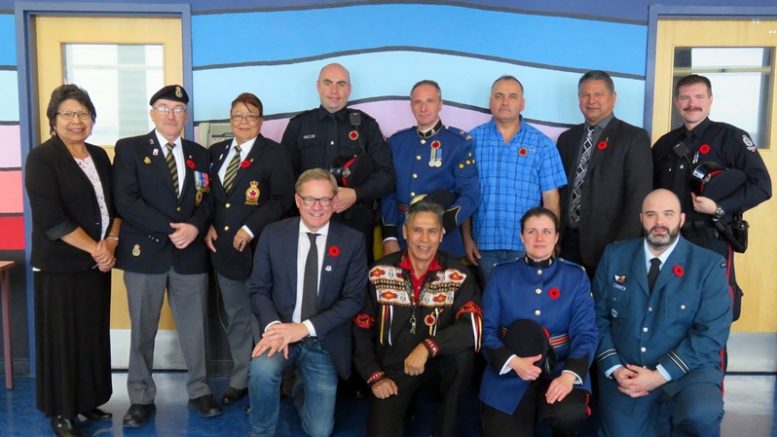 Elders, dignitaries and community partners participated during the 2018 Remembrance Day ceremony at Amiskwaciy Academy in Edmonton. (Photo by John Copley)

(ANNews) – On Friday, November 9 Edmonton-based Amiskwaciy Academy honoured the sacrifices made by Canada’s veterans, both in times of war and in times peace, as the school celebrated Remembrance Day 2018, an historical year that marks the 100th anniversary of the end of World War I.

The hour and a half long ceremony got underway with an honour song and a Grand Entry that included Elders, veterans, sponsors, cadets, community partners and members of the Edmonton Police Service and the RCMP. 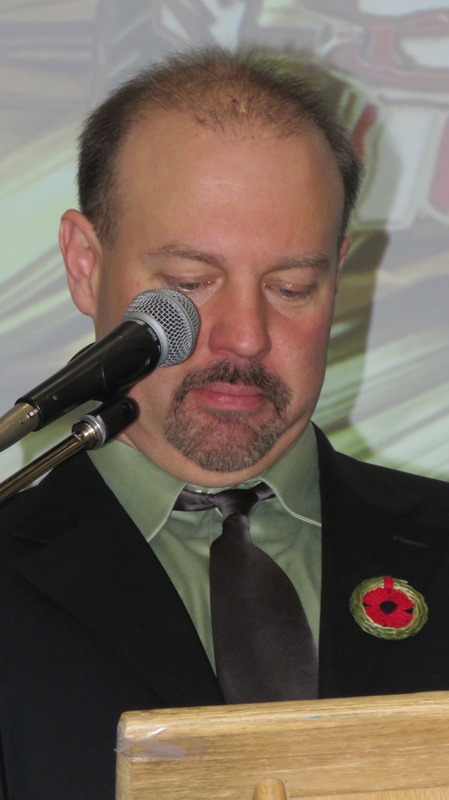 Francis Whiskeyjack offered a prayer and gave thanks for the freedoms and luxuries we enjoy today because of the sacrifices made by our veterans in days gone by. He asked that the grandfathers and grandmothers in the spirit world, “who guide us each day” be remembered for their contributions to the lives we share today.

Minister Eggen expressed his gratitude for “being here today to speak to the students, teachers and Elder Whiskeyjack. On this, the 100th anniversary of the end of World War I, we gather and try to remember what it was like here in Edmonton and in Canada and the world 100 years ago. We often talk about how things were tough, but we can really only imagine how difficult and uncertain things were.

“World War I was perhaps one of the worst single events in human history – so many millions of people killed, so many Canadians injured and killed – thousands – and in what was then such a small country. Half of all the people who went to war from Edmonton were injured or killed in action, so you can only imagine the impact on this small city 100 years ago. We lost a whole generation of young men – women as well – and it took a toll on the city for many years to come. 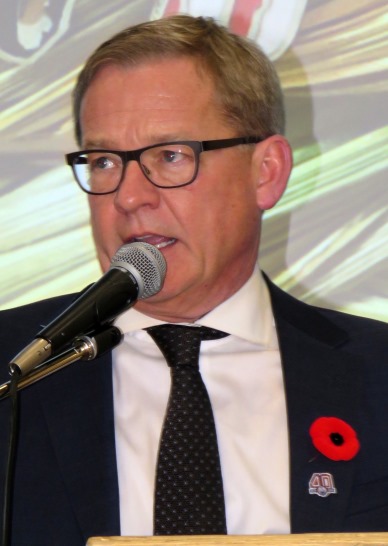 “As the Minister of Education that’s a lesson I want to make sure that we learn in all our classrooms throughout Alberta. We must always ensure we honour and respect the choices they made, and we must always remember the sacrifices they made. Our Canadian forces here now in 2018 do a great job, not just protecting our own country but also defending democracy and the rights of people across the globe.”

Donald Langford addressed the gathering and spoke about the atrocities of war, the lingering effects and of his own family history on the battlefront.

“I am honoured to be here with you today and to celebrate with you during this, the 100th anniversary of the November 11, 1918 armistice signing that brought an end to World War I,” said Langford. “Most people don’t have a lot of knowledge about the first world war, and the sacrifices made by our veterans, but it is important to remember the sacrifices they made on our behalf, especially the were Indigenous soldiers. As a (former) soldier I’ve had the opportunity to study the various wars, the tactics, the strategies and how we became involved. One thing I’ve learned is that soldiers don’t cause wars – governments do. My own family history goes back to the Battle of Batoche in 1885. My grandfather was born in 1874; his father died at Batoche and he told me stories I was growing up. My next family involvement was during World War II.” 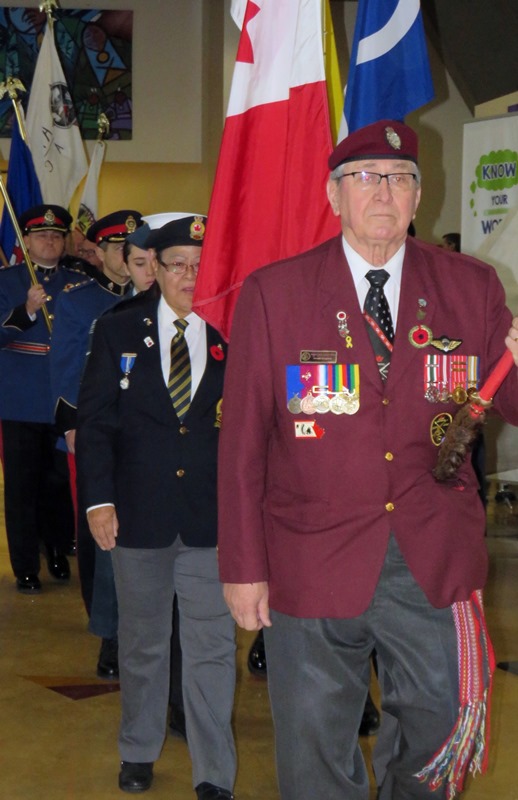 Langford spoke about his family’s participation during the first and second world wars and then talked about the brave men and women from Indigenous communities across Canada who volunteered for service and were proud to go to war to defend the freedoms we enjoy today.

In an earlier interview, Langford, a Metis Elder and a Canadian soldier for 37 years, said, “Indigenous soldiers were elite fighters throughout the various wars and conflicts they’ve participated in. More important is that they returned home with a great deal of knowledge and leadership abilities. Some of these include people like Sam Sinclair, who played a major role in developing the Métis Nation of Alberta; Stan Shank, who helped create Native Counselling Services and the Canadian Native Friendship Centres; Vic Letendre who developed Native Youth Justice Society; Lt. David Greyeyes, who was stationed in seven different European countries and returned home to become Chief of his Band, a Regional Director of Indian Affairs and an Order of Canada recipient…..the list goes on.”

Langford, the Executive Director of Edmonton-based Métis Child and Family Services, served in five different Canadian Forces bases as well as in Germany. He was one of about 30 serving members who participated in the now-defunct Canadian Forces Aboriginal Forum – a lobbying group that worked to enhance Indigenous rights and to create opportunities for young Aboriginal Canadians who might want to seek employment in Canada’s military. 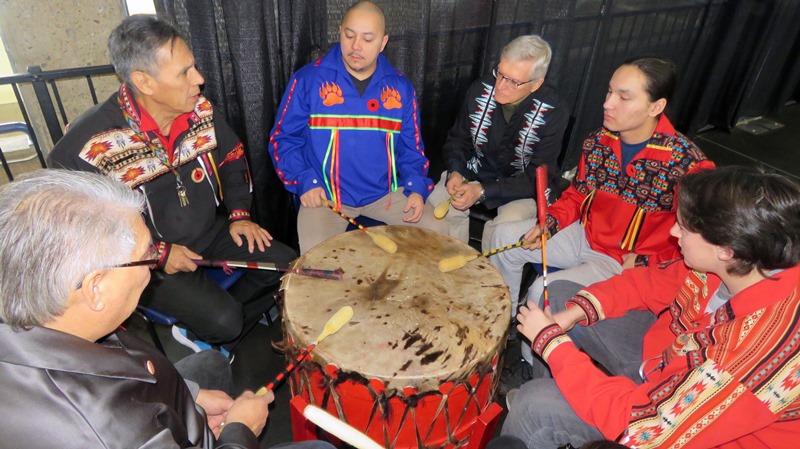 “When Canada’s Aboriginal soldiers returned home after the wars,” explained Langford, “they were basically ignored and forgotten about – one faction of government wanting to put the onus on another and so it went on until the turn of the new millennium,” when Canada ’s Armed Forces finally (for the first time) officially recognized the contributions of Indigenous servicemen and women.

Amiskwaciy Academy is an Edmonton Public School program of choice that provides solid academic programming within an Aboriginal context. Open to students of all backgrounds, Amiskwaciy is the Cree word for Beaver Hills as the Cree used to call the Edmonton area “Beaver Hills House.” The school name was chosen in consultation with Elders from the Aboriginal community. At Amiskwaciy Academy, students have the opportunity to participate in traditional ceremonies, rites of passage, and Indigenous arts. There is spiritual guidance in the form of sweat lodge ceremonies, Sweet Grass purification, and daily drumming and singing with Cree to the Creator.