“We are making good on our promise to fundamentally transform our relationship with the Indigenous people of Alberta,” said Rachel Notley, Premier of Alberta. “The Protocol Agreement signed with Treaty 8 First Nations expresses our shared vision and belief that together we can build a better future with the First Nations people of Treaty 8.”

The Protocol Agreement will establish mechanisms by which First Nations’ Chiefs and government will meet to determine joint strategies to address priority areas, which may include: Women and children; Consultation, development and the environment; Economy and employment, Municipal Affairs, Education, Health and Infrastructure. 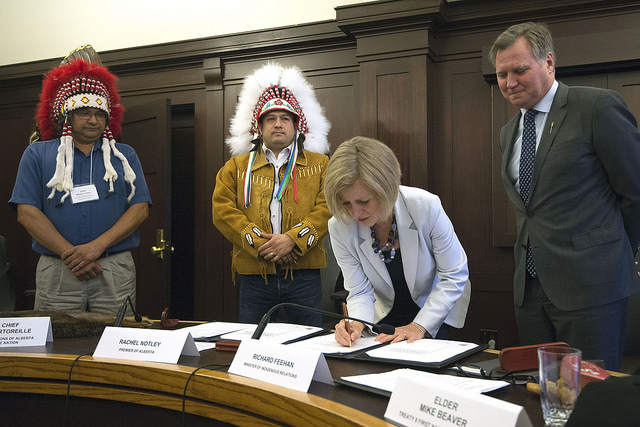 “The protocol agreement signed between the First Nations of  Treaty 8 in Alberta and the Province of Alberta is a historic step towards greater collaboration and a stronger government-to-government relationship,” stated Steve Courtoreille, Grand Chief of Treaty 8.

The Premier has committed to meet with the Grand Chief and Treaty 8 Chiefs to discuss the Protocol Agreement and work done to address the priority areas.

“Our relationships depend on establishing common ground,” added Richard Feehan, Alberta’s Minister of Indigenous Relations. “This agreement provides a shared space, a place where the Alberta government and Treaty 8 First Nations can work together on mutual concerns.”

“It is important that we have opportunities to come together and have an open and honest dialogue about what we can do to create better outcomes for the people of Treaty 8 in Alberta and the people of Alberta,” concluded Isaac Laboucan-Avirom, Deputy Grand Chief of Treaty 8. “The agreement signed today will foster stronger relationships and produce meaningful work on several critical priorities.”

Treaty 8 was signed in 1899 and includes all of Northern Alberta.