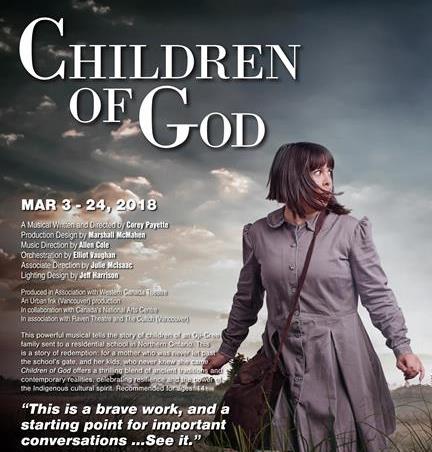 (EDMONTON) – Children of God – a new musical written and directed by Corey Payette whose cast is predominantly made up of Indigenous performers is coming to Edmonton’s Citadel Theatre from March 3-24, 2018. The Citadel is offering a special price for readers of Alberta Native News on performances from March 3-18. Just use the password PAYETTE when you order your tickets from citadeltheatre.com to get the special $20 rate.

A work of immense beauty in music and story, Children of God is a powerful musical that has drawn national attention for its message of resilience and redemption. Children of God has its share of heartache as it tells the story of an Oji-Cree family torn apart when the children are taken away to a residential school in Northern Ontario. In it, we meet Rita, a mother who was never let past the school’s gate, and her kids, Tom and Julia, who never knew she came. In its fierce beauty and honesty, Children of God blends ancient traditions and contemporary realities, above all celebrating the resilience and power of the Indigenous cultural spirit. The Globe and Mail called Children of God “must-see theatre for Canadians.” Children of God is an important story of reconciliation, connecting us all as we strive to honour the past while moving forward together.

The musical Children of God, written and directed by Oji-Cree artist Corey Payette, was developed in collaboration with English Theatre at the National Arts Centre. The show had its World Premiere at the York Theatre (The Cultch) in Vancouver in May 2017 and at the National Arts Centre. After its run at the Citadel Theatre, the production will move to Western Canada Theatre in Kamloops, B.C. 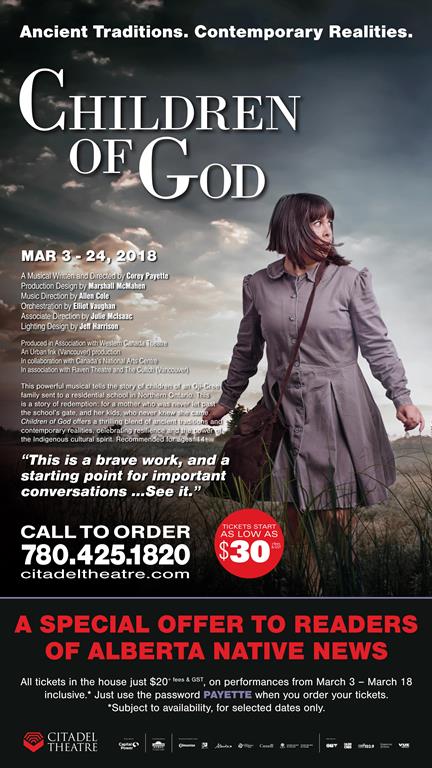 Payette is the Artistic Director of Urban Ink Productions and founder of Raven Theatre in Vancouver. He has worked as a playwright, actor, composer, and director across Canada, with credits that include Moonlodge (Urban Ink); A Christmas Carol (National Arts Centre); and La Cage Aux Folles (Vancouver Playhouse). This is his first time directing at the Citadel Theatre.

The production features a cast predominantly made up of Indigenous performers, including Dillan Chiblow as Tom/Tommy, Sandy Scofield as Rita, and Cheyenne Scott as Julia. The show features set and costume design by Marshall McMahen, original sound design by Kris Boyd, sound design by Kyra Soko, lighting design by Jeff Harrison, and musical direction by Allen Cole.

Children of God runs at the Citadel in the Shoctor Theatre March 3-24, 2018. Following each performance, a facilitated talk-back will take place in the theatre.

For more information or to purchase tickets visit citadeltheatre.com or call 780.425.1820. Tickets start at just $20 plus fees and GST for Alberta Native News readers on select dates – inclusive from March 3 – 18. Use the special password PAYETTE when you order your tickets to get your special discounted rate (subject to availability). Don’t miss this powerful production.

Be the first to comment on "‘Children of God’ musical tells powerful story of Residential Schools: Mar. 3-24 in YEG"