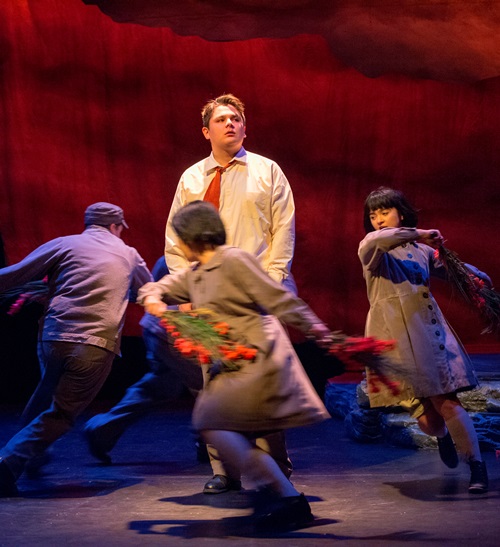 (ANNews) – The audience hears the faint sound of a distant drum, the lights slowly begin to brighten and the stage opens in a northern Ontario Indian residential school. The date is uncertain because the government sanctioned, church administered schools, which were designed to “civilize” Canada’s Indigenous peoples and assimilate them into western culture, operated in Canada for nearly 200 years; the last one didn’t close its doors until 1996.

Children of God, the creation of writer, director and musical intellect Corey Payette is an eye-opening, educational and particularly moving experience about the lives of two Indigenous siblings, Tommy and Julia (played by Dillan Chiblow and Cheyenne Scott).  It is being performed at the Citadel Theatre in Edmonton until March 24.

The children, like tens of thousands of others, had been removed from their families and communities and placed in the school under the watch of the church – in this setting represented by Father Christopher (David Keeley) and Sister Bernadette (Sarah Carlé). The old-style steel beds and grey woollen blankets are set up in what appears to be some kind of cave. Enter Father Christopher – at first just a menacing shadow making the rounds and issuing orders. The audience has had time to appreciate the undignified, if not inhuman way in which the children are being treated by Sister Bernadette and Father Christopher. You could almost hear the gasp and feel the anger when it becomes obvious that Christopher is a pedophile.

The performance, which runs about two and a half hours in length, comes with a 15-minute intermission; facilitated talk-back sessions follow each performance and the audience is encouraged to participate.

Children of God offers a haunting look into 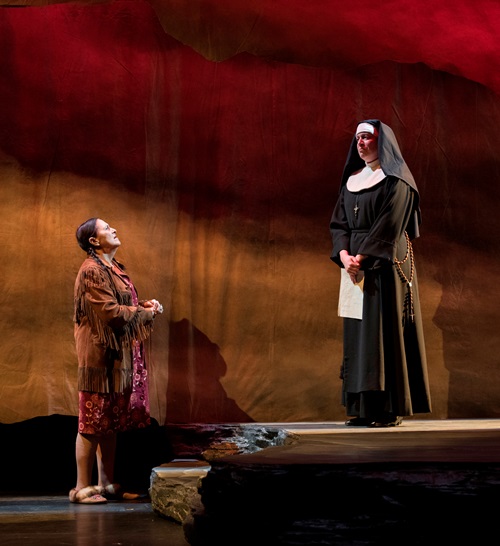 Children of God, a musical production by Corey Payette provides a haunting look at the Indian Residential Schools from many perspectives. It is currently at the Citadel Theatre in Edmonton until March 24. It is a must-see performance for all Canadians – Indigenous and non-Indigenous alike.

what it was like living in an Indian Residential School – an oppressive environment where punishment was ongoing and personal choice was non-existent. The set changes as time goes by, switching back and forth between their time at the school and then 20 years or so later when the impacts of the residential school years are evident. Tom is unemployed and in a foul mood. He’s recently separated from his wife and children and living with his mom. They fight with one another, failing to understand that they both have had traumatic experiences they need to conquer. Their stories need to be shared so they can heal.

Children of God is an exceptional work of musical theatre. The story is powerful and the audience is on an emotional roller coaster.  The music is haunting and sorrowful but the chanting, the dancing and the drum beats are so well placed that the audience is uplifted.

This well-written and meaningful piece of artistic genius is complemented even further by the magnificent work done by the entire crew at the Citadel, with special mention going out to Production Designer Marshall McMahen, Lighting Designer Jeff Harrison, Music Director Allen Coe and Citadel Artistic Director Daryl Cloran.

The on-stage action was both fluent and fluid and though every actor handled his and her roles beautifully, special note has to be given to the outstanding performances of Sandy Scofield (Tommy’s mother, Rita), David Keely, and Dillan Chiblow.

Scofield’s remarkable performance saw her turn from a desolate mother who loses her kids to a harsh-speaking woman to a mother whose heart is opened through song and the sound of her incredibly beautiful voice shines through. 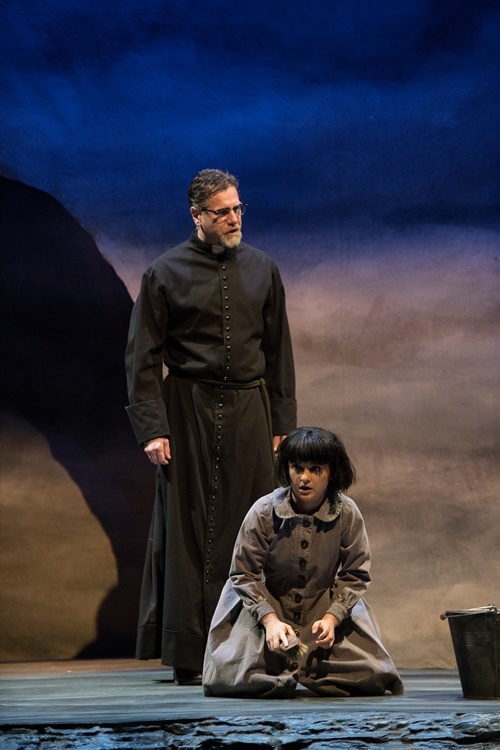 Keely was magnificent as the overbearing and cruel Father, so much so you had to stop yourself from shouting out a warning when he approached the girls’ dormitory.

Chiblow is a tough act to follow – his mastery at switching from school boy to grown man on a moment’s notice was amazing to see – and hear – especially as he changed his voice, cadence, facial expressions and gait to suit the moment.

When writer, director and musical intellect Corey Payette wrote the script to this extraordinary musical, he knew the subject matter would be difficult for some audiences to endure, but he also realized if reconciliation is to become a reality in the foreseeable future, every Canadian must be brought up to date on the nation’s history, a history that for the most part, has not been kind to Indigenous Peoples.

“There’s a real chance that reconciliation can work in Canada, but for this to happen Canadians have to know the truth and they have to become involved; they need to participate, engage and decide to learn about Indigenous peoples and that’s what we are trying to achieve,” Payette said in an interview following the play’s opening night performance in Edmonton’s Citadel Theatre.

Payette said as much as he wants the public to see the show so they can get a better understanding of how and why Indigenous children suffered at the hands of religious organizations when they were taken from their homes and communities, he is hopeful that they will carry the images and the messages they take from the production and pass them forward.

Payette said he’d like to see everyone in the capital region come out to watch the Citadel Theatre production because “we want to see all Canadians involved in reconciliation and we are hopeful that this play will act as a catalyst that will encourage more people” to get involved. 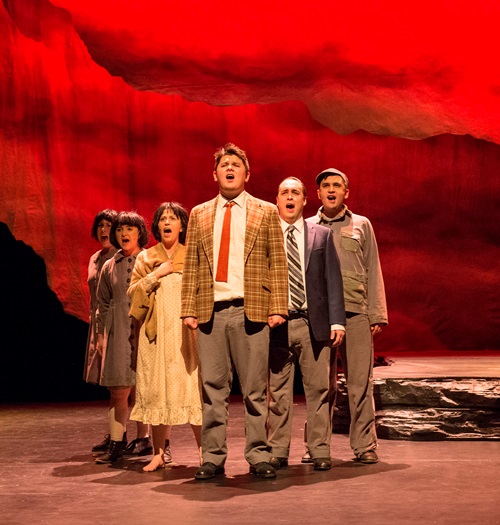 He also encourages members of the Indigenous communities to “come out and see the production; we want to get feedback from everyone. We need your input; your participation will help us to answer (the age-old) question: Where do we go from here?”

The playwright said he realizes that the production will bring back some memories that many former students and families are trying to forget. To combat that grief, every performance has Elders and caregivers on hand who are prepared to help anyone who needs to talk.

“Performances that deal with the trauma of residential school abuse can act as a trigger for survivors and their families, as it can for anyone who has lived through or experienced traumatic times and events in their lives,” he explained.

“We have support workers with us at every performance; if you are strong enough, brave enough to experience this presentation, then we need to ensure that help is available if anyone in the audience needs to talk.”

Children of God launched its world premiere in Vancouver in 2016 and before arriving in Edmonton had spent much of the past year in Ottawa. Before its Vancouver debut, however, Children of God was worked on and rehearsed at the Tk’emlüps Indian Band’s Chief Louis Centre, the home of a former residential school.

“It was a remarkable time,” noted Payette, “and one that helped to create memories that will last a lifetime. We reached out to 17 different Indigenous communities in B.C. and we had great turnouts.

“It was a very emotional experience for most who came to see the work, but everyone agreed that it is a story that had to be told.”

Citadel Artistic Director Daryl Cloran began his tenure with the Citadel Theatre in September 2016. He came to Edmonton from his role as Artistic Director of Western Canada Theatre (WCT) in Kamloops, where he had had some involvement with the Children of God production.

“I knew this was going to be a good play the first time I saw it,” Cloran noted. “When I came to Edmonton I wanted to be sure that we were able to show it.”

Ironically, once the show has run its course in Edmonton it will head west to Kamloops for a two-week run at the Western Canada Theatre. Cloran has worked on plays involving Indigenous people before, noting that “we had a very strong relationship with the Indigenous communities around Kamloops, but this is the biggest production of its kind that I’ve been involved with.”

Is this a story that needs to be told?

“It’s an important story and an important part of Canada’s history. Corey has done such a magnificent job of telling this story and the music he’s written for it is beautiful. It’s very hard-hitting and dramatic but I think he’s found a way to offer hope; he hasn’t solved everything and he leaves us with some very tough questions – like how are we as an audience going to move forward with reconciliation and how are we going to work together?”

“Yes, the biggest thing that continues to surprise me is that for many of our audiences this is the first time they’ve heard about the residential school or they didn’t realize the depth as to what happened with the schools.

“For me, I think this is a great way of bringing this information to the forefront and make it a part of our consciousness.”

Christine Sokaymoh Frederick, the Citadel’s Indigenous Associate Artist is an urban Aboriginal Cree-Métis woman with thirty years of performance experience. Over the years she has represented Canada on the international stage as a dancer, musician, media artist, writer, producer, and actor.

“In this time of Truth and Reconciliation,” said Frederick, “it is important to see the work of Indigenous and Aboriginal artists, such as Children of God.

“Not only is it a stunning work and excellently performed, but it speaks to the Truth. We are still in the “Truth” part of the TRC process, and we need to spend some time there before we leap or rush towards Reconciliation. We need multiple approaches in sharing information and education with other indigenous peoples and with Canadians.”

“The Arts are a vital part of Truth and Reconciliation. The human rights violations as defined by the United Nations include cultural and capacity deprivation, therefore when Indigenous and Aboriginal artists practice art we are literally redressing those violations and rebuilding our culture and identity.

“Children of God is having a great impact on audiences and the arts community, many people sharing that even though they heard or read about the TRC statements and Calls to Action, this work touched a deeper part of their humanity, and that’s what our Elders have told us, that the Arts were meant to communicate our humanity. I know the Creator is listening, it’s time for Canadians to experience it too.”

Children of God is playing at the Citadel Theatre in Edmonton until March 24.  Click here for tickets and times