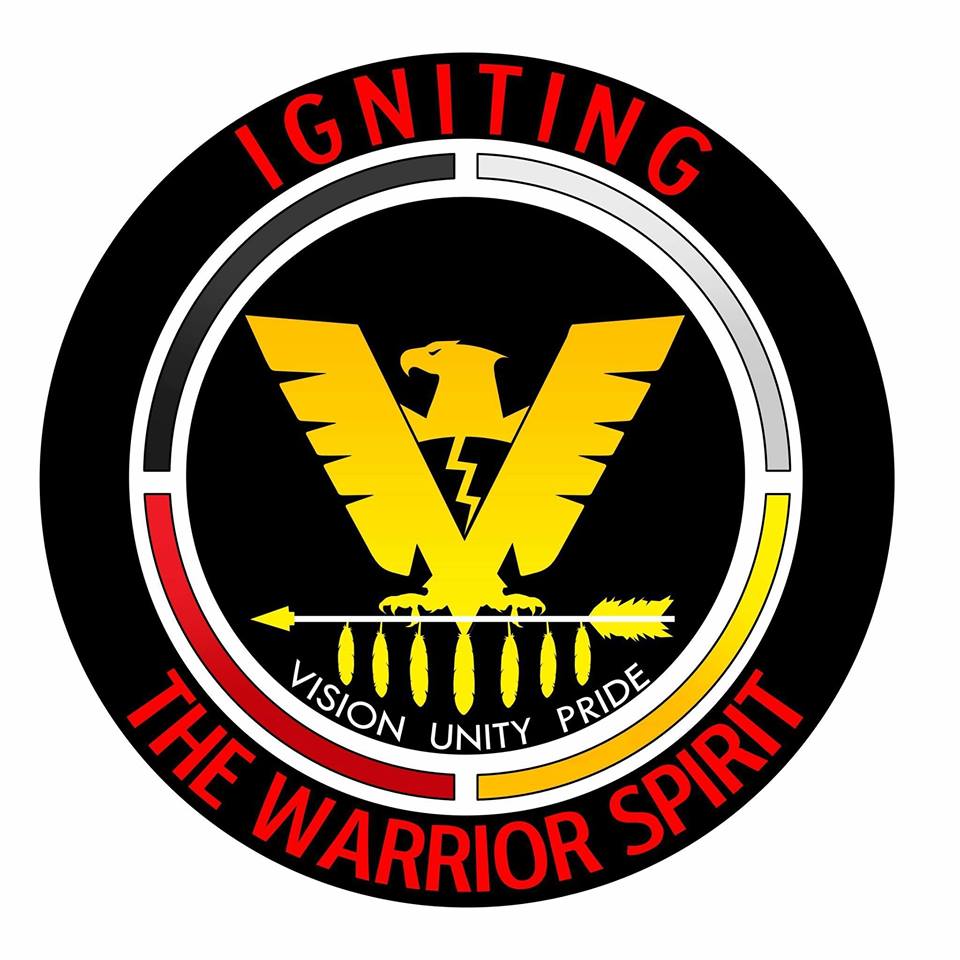 (ANNews) – The Indigenous Men’s Gathering (IMG), “Igniting the Warrior Spirit” took place at the Edmonton Inn and Conference Centre on February 27-28, 2018. The Edmonton event, presented by Dennis Cameron and Visionary Planning, Development and Management Group, was preceded by similar gatherings in Saskatoon and Winnipeg, and will continue later this month in Kamloops, B.C. and Thunder Bay, Ontario.

The two-day Igniting the Warrior Spirit gathering focused on the unification of Indigenous men and dealt with topics that included reviving and understanding old teachings, overcoming the impacts of colonialism, truth and reconciliation, respecting Elders and the important roles they play both in and away from the community, men’s health, addictions recovery, traditional health and customary lifestyles, economic development and education and career planning.

The subjects were varied and diverse and throughout the gathering participants were encouraged to connect with one another, to network and share thoughts and ideas. They were encouraged to share their stories, talk about their concerns, and to provide their contact info so that follow-up could take place following the IMG event.

Igniting the Warrior Spirit, the theme of the IMG initiative, is a term symbolic of what many Indigenous leaders believe to be a key ingredient in the recipe needed to revive the strength and resiliency that Indigenous peoples and communities once shared – getting back to one’s roots. 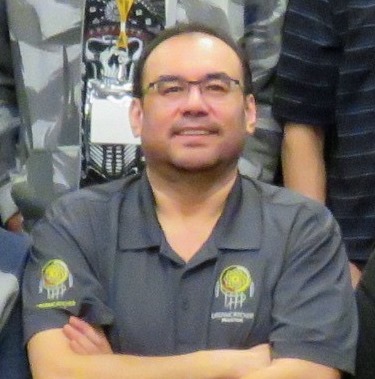 “I know many of you have attained a thorough western education and that’s a good thing,” noted IMG host Dennis Cameron, “but you also have personal knowledge and abilities and experiences that can help your brothers as they also seek answers on their personal roads to recovery. Connect with one another, speak to each other and learn from one another. Communication is important and necessary because when we work together to reach similar goals we can open those doors more easily and we can find the answers we are searching for.”

In a prelude to the event Cameron talked about the “vast diversity” that exists throughout Indigenous Nations, noting that despite the many differences “we all have a common goal of building and sustaining our Nations.”

But, he noted, “we cannot do this without the existence of our people. There are many who have come a long way in their healing process, given all the wrongdoings they have endured. However, there are those that have not started their healing journey, nor have the generations that have been subjected to the vicious ripple effect that has plagued our peoples. This is largely due to the disruption and intrusion of our customary practices, beliefs and systems that we utilized since time immemorial. Given this statement, I remind us all, to keep our foresight on the future in a good and kind way, so that generations after us, are here to stay.”

The Gathering and its accompanying trade show got underway at 9 a.m. on Feb. 27 following a Pipe Ceremony and a prayer by Pelican Lake, Saskatchewan Elder Glen Chamakese. Following a welcoming and opening remarks by Cameron the nearly 150 participants heard from session facilitators, participants, keynote speakers and others who were invited to the podium to offer their stories, experiences and words of wisdom.

A group of participants and speakers who attended the ‘Igniting the Warrior Spirit’ Gathering in Edmonton last month.

The first Keynote Speaker to address the gathering was Indigenous Ambassador and member of Saskatchewan’s One Arrow First Nation, JR Larose, an accomplished athlete and former Canadian football league star who won the coveted Grey Cup Championship in 2011. A proud family man JR’s path to success has been a long and hard-fought journey. Growing up in low income housing in Edmonton’s inner city didn’t exactly set JR up for success but it did give him the drive to succeed. JR’s Mom, Barbara, was a survivor of the Residential School system, where many First Nations children were torn from their families and culture only to be abused by those who promised them an “enlightened life.”

Walkingbear, a Camosun College graduate who earned his Indigenous Family Support Certificate also completed five years as an Elite Student-Athlete in the Canadian College’s Athletic Association (CCAA) In his comments, Walkingbear noted: “I encourage all Indigenous peoples to learn about who we are and where we come from. We must understand our past to educate the present to better our future.”

The first afternoon session was hosted by Poundmaker First Nation member, Carlin Nordstrom. He spoke from the heart as he addressed his life’s experiences and talked about his desire to see youth succeed in life. His topics included goal-setting, anti-bullying, self-empowerment, determination & control, building healthy relationships, attaining a positive focus and eliminating barriers.

Other sessions were hosted by George Morin who sought justice for the unwarranted killing of young Colton Bushie; Samson Cree Nation facilitator Patrick Buffalo, whose subject, Totamaso Healing in Indigenous Communities, delved into the topics of hypnotherapy, reiki massage and complementary therapies; and Wayne Mason, a member of the Fisher River Cree Nation and the Executive Director of the Way-Say Healing Centre. He works primarily with Indian Residential School students and their families in accessing appropriate levels of emotional health and wellness support services. 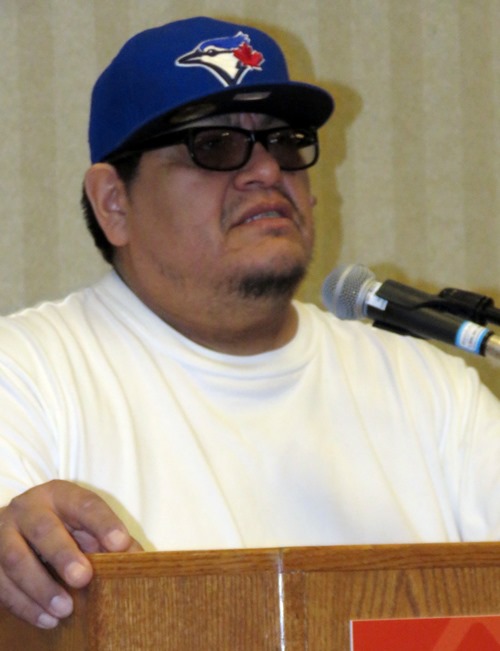 A Pipe Ceremony, prayer, and Drum Song got IMG’s second day of sessions off on the right foot. Drum Song performer, Neil Sioux, a member of Manitoba’s Sioux Valley Dakota Nation also participated as the day’s Keynote Speaker. Currently employed by the QBOW Child and Family Services in Ft. Qu’Appelle, Sask., Sioux has extensive experience and knowledge of the justice system, CFS, cultural based programs, traditional and ceremonial practices, drum groups, Indigenous world views and how they are key when it comes to benefitting community-based programs and healing practices.

Mr. Sioux said that he considers himself to be one of the lucky ones in that he had the opportunity to be surrounded by Elders and visionaries who helped to show him the path to an active and fulfilling future. He told the gathering that the wisdom and paternal/maternal experiences that the Elders share in every Indigenous community are important and need to be paid attention to, even though they are sometimes misunderstood.

“Our Elders share their views, share their stories, share the protocol of ceremonies and if not for that, I’m not certain of where I would be today,” he said. He told the gathering that as a baby in a hospital run by the Catholic Church he was about to be picked up by an adoptive family when his grandfather showed up and carried him away. 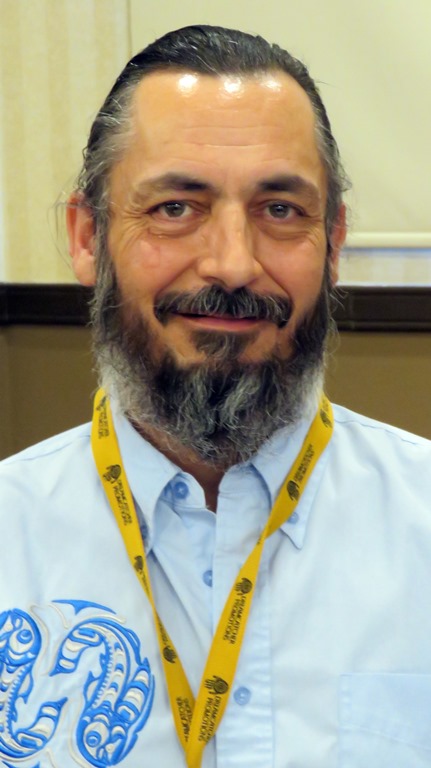 “I guess he kind of stole me from the hospital,” he said to the delight of the audience. “He kept me hidden for the two years that it took to get all the paperwork straightened out. I’m very thankful for that. I grew up with a single mom but I was also raised by my grandparents. I grew up knowing my culture, I grew up knowing our traditions, I grew up speaking our language and I grew up with ceremony. That’s why when I talk about healing I always resort back to my grandfather; he was my teacher, he was my mentor, he was my hero. He had attended LaBrete Indian Residential School for the biggest part of his young life; he left the school when he was 16 years old. He was later constricted into the army as an infantry soldier and was a sniper in World War II. When he participated in storming the beach at Normandy, he was just 17 years old.”

Sioux said that he didn’t experience what so many other Indigenous children did when he acted up because “I was never hit, I was never yelled at or scolded or received (corporal) punishment. Growing up on the reserve I felt kind of guilty just seeing and knowing what my friends had to endure.”

Today Neil Sioux is a Cultural Liaison who uses “our cultural ways to assist communities and families to begin the healing process through cultural awareness workshops, and by utilizing the Elders in every community.”

He was previously employed by Manitoba Corrections and during his time there he worked in three different prisons.

“I held the position of Aboriginal Spiritual Caregiver within the provincial Institutions,” he explained. “I worked with incarcerated men and boys. By teaching them our culture, they are able heal from their past. I have committed myself as a helper throughout my professional career. Today I am a Pipe Carrier. I have been a Sun Dance Chief for nearly 12 years, and I enjoy the life it brings. I have had the rare opportunity to be taught the gift of singing and songs. My community has many Elders who still carry these old songs and practices.

“It is my belief that in order to heal, today’s men and boys need to connect with spirit so they can gain a better understanding of themselves and in doing so will be able to heal themselves.” 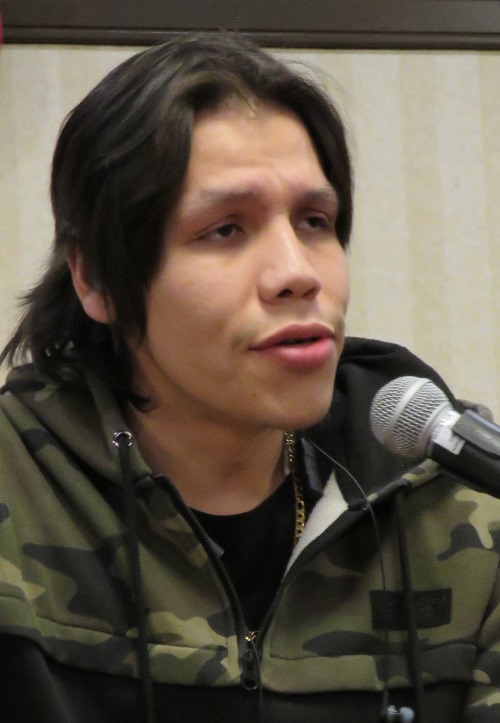 Speaker Jordan Apetagon is a member of Manitoba’s Norway House Cree Nation and a survivor of the intergenerational trauma of residential schools. Both of his parents were in residential schools and his father was a part of the 60’s scoop. At one point, he was a product of this broken system, a damaged environment that was haunted by the memory of the residential schools.

Addressing the gathering, he said: “I, like so many others, sometimes wonder what life would have been like if we hadn’t been exposed to decades of deliberate abuse, neglect and violence. I think that it is very important that we gather together to share our stories and talk about what we have to do, both individually and collectively, to ensure a brighter and better future” for the generations yet to come.

But he added, “my children will not know the pain of intergenerational trauma. Every day I wake up sober, a free man, surrounded by people who truly love me and believe in me.”

Apetagon said he feels “blessed” and “vows daily” to himself that he will never walk that path of destruction again.