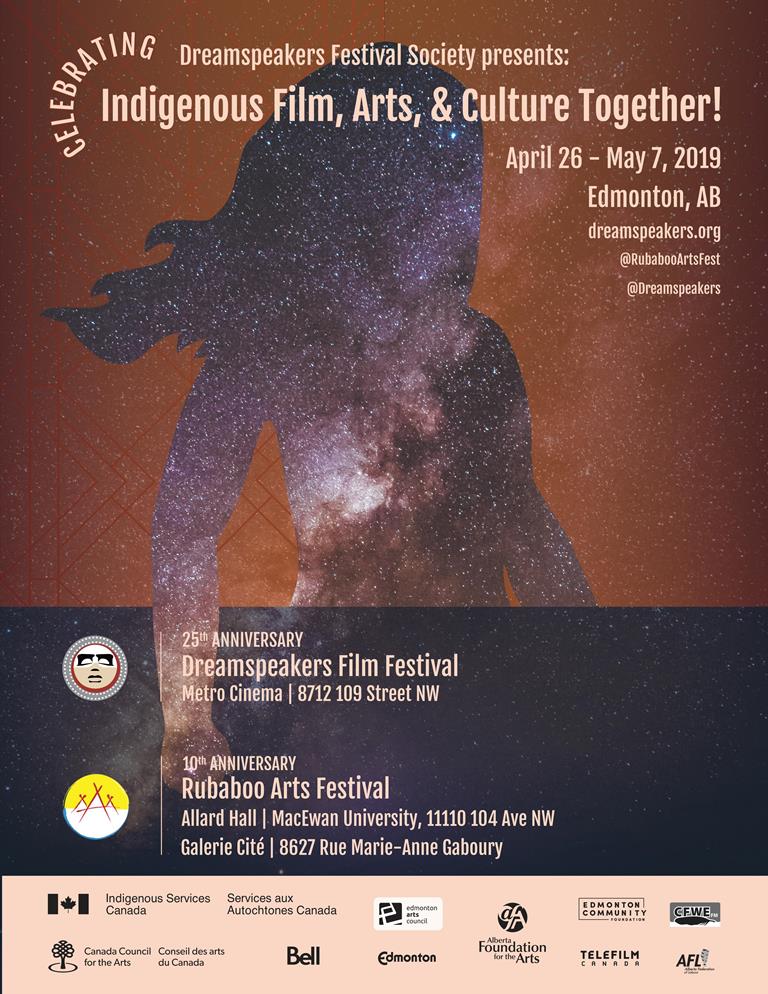 (Edmonton, AB) – Join us for the 10th anniversary of the Rubaboo Arts Festival and the 25th anniversary of the Dreamspeakers International Film Festival – April 26 to May 7, 2019. Presented in tandem, this celebration features extraordinary artists and their work, across multiple disciplines.

“Art is Powerful Medicine and it leads much of the work of Reconciliation in Canada. Our Elders tell us art was participatory and embedded in our ceremonies meant to communicate our humanity to the Creator, and to each other,” remarked Christine Sokaymoh Frederick, Executive Director of The Dreamspeakers Festival Society.

“We invite all Canadians, newcomers and visitors to join us in this celebration of expressed humanity and share in the work that builds our collective identity!”

View a unique Dreamspeakers selection of Indigenous films, including the award-winning Falls Around Her starring Tantoo Cardinal and directed by Darlene Naponse, and Three Feathers based on the graphic novel by Richard Van Camp.

Tickets range from free to $20. Film tickets are available at metrocinema.org. Rubaboo tickets available At The Door. For TICKETS, DETAILS and FULL SCHEDULE please visit WWW.DREAMSPEAKERS.ORG

Both festivals are produced by The Dreamspeakers Festival Society, and are supported by Indigenous Services Canada, Canada Council for the Arts, Alberta Foundation for the Arts, Edmonton Arts Council, The City of Edmonton, Bell Media and Telefilm.

Be the first to comment on "Celebrate the Rubaboo Arts Festival and Dreamspeakers International Film Festival in Edmonton: April 26 – May 7"