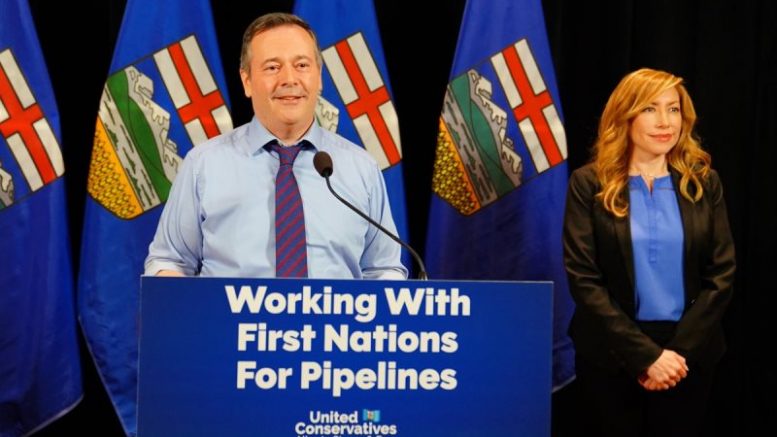 EDMONTON, AB (April 3, 2019): In what he described as a “historic game changer” and a “huge win-win” for both Indigenous Canadians and Alberta’s ailing oil and gas sector, United Conservative Leader Jason Kenney announced that his party, if elected, will create an Aboriginal Opportunities Corporation to facilitate First Nations financial participation in major resource projects, including pipelines.

“We need to do something dramatically different to end the stalemate that has left Alberta energy landlocked and has led to a jobs crisis in our province,” Kenney said at a news conference held at the Enoch First Nation near Edmonton.

“The Trudeau-Notley alliance has killed two pipelines, put two more on life support, and is threatening our future with anti-pipeline laws like Bill C-69 and C-48.  We need a radically new approach from the failure of the past so we can get a fair price for our energy, and we need to move beyond empty words to give real, concrete meaning to reconciliation with Aboriginal Canadians.”

Kenney underscored how most First Nations in Western Canada support environmentally responsible resource development, but that their interests have been undermined by a small minority of typically foreign funded opponents of energy development.

“For too long all the legal, political, and media debate around energy and the environment has been dominated by the minority of anti-development groups. It’s time to give a real voice to those First Nations who want to be partners in environmentally responsible resource development so that they can help move their people from poverty to prosperity,” Kenney remarked. “This is the moral cause of our time: moving beyond empty gestures to empower Aboriginal Canadians to take charge of their own destiny.”

The UCP Leader pointed to several Aboriginal-led initiatives to advance both oil and gas pipelines and other energy infrastructure projects, including:

“These are just some of the growing number of First Nations who see resource development as a key to their social and economic future,” Kenney said. “But we need to move this momentum to a whole other level where Aboriginal people become real owners of major energy projects.”

Kenney committed that if elected, a United Conservative government will consult with First Nations in establishing the Aboriginal Opportunities Corporation (AOC) as a Crown Corporation to facilitate and backstop up to $1 billion in Aboriginal investment in natural resource projects and infrastructure, including pipelines.

“We will consult with First Nations on the design and mandate of the AOC, and ensure Indigenous representation on its board,” Kenney said. “The AOC will provide technical and advisory support to Indigenous communities interested in pursuing financial participation in energy projects and will offer a range of financial instruments on a commercial basis. We will be open to partnering with the Government of Canada and other provincial governments in expanding the fund”.

Kenney said that the AOC would provide:

“Aboriginal Albertans were our first entrepreneurs. They want to benefit fully in the wealth generated from their traditional, treaty, and reserve lands. But too often they lack the financial equity that they need to make that happen. The Aboriginal Opportunities Corporation will bridge the gap between the ambition of First Nations to be full commercial partners in our energy industry, and their limited financial capacity,” Kenney said.

Kenney said that a UCP government would provide an initial investment of $24 million over four years to establish the AOC and would earmark $1 billion to facilitate and backstop financing for Aboriginal financial participation. These funds would be re-allocated from the NDP government’s $3.7 billion rail lease, which the UCP is committed to cancelling.

Kenney also outlined other United Conservative commitments to ensure the inclusion of Aboriginal Albertans, including:

The Indigenous vote could be an Alberta Election Game Changer!