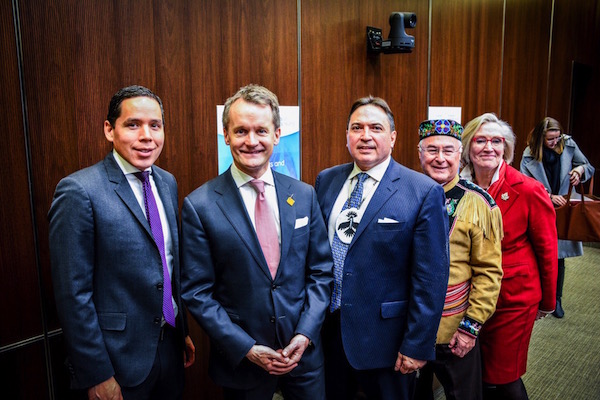 On February 28, the Government of Canada, the Assembly of First Nations, Inuit Tapiriit Kanatami, Métis National Council, and other Indigenous leaders joined in a celebration in Ottawa to mark the introduction of Bill C-92 in Parliament.

The over-representation of Indigenous children in care is a crisis: First Nation, Inuit and Métis children represent just 7.7% of all children under 15 in Canada, and yet they make up 52.2% of children in foster care according to Census 2016.

“Indigenous children and youth have the right to be raised as proud First Nations, Métis or Inuit citizens,” stated Minister O’Regan. “Children’s wellbeing, resilience and self-esteem depend upon a secure, personal and cultural identity. This proposed legislation enables Indigenous communities to support their families and keep children in their communities according to their laws, traditional practices and customs. Today, we are taking concrete steps to address the tragedy of the disproportionate numbers of indigenous children in the child welfare system and work towards a better future for First Nations, Inuit and Métis children and youth.”

The current approach too often sees Indigenous children separated from their families and communities on the basis of poverty, inter-generational trauma and culturally biased child welfare. This proposed bill seeks to reform this approach and promotes a shift from apprehension to a system built around preventative care.

“With the introduction of Bill C-92 today, we mark an historic turning point for First Nations, Inuit, and Métis children and families,” stated Minister of Crown-Indigenous Relations, Carolyn Bennett. “Bill C-92 will finally put in law what Indigenous peoples across this country have been asking of governments for decades: that their inherent jurisdiction over child and family services be affirmed so that they can decide what is best for their children, their families, and their communities. The overrepresentation of Indigenous children in foster care in this country is a crisis, and we cannot sit idly by. While Ottawa can be a place of partisanship – I know that Parliamentarians of all stripes would agree that this work is well beyond our divisions. An entire generation of Indigenous children and youth are counting on us get this right. We cannot let them down.”

Bill C-92 establishes principles that include the best interests of the child, cultural continuity, and substantive equality. These principles would guide how services are delivered to Indigenous children in all jurisdictions and regions of the country, while aiming to reduce the number of children in care.

“This legislation is first and foremost about First Nations children and their safety, their security and their future,” noted AFN National Chief Perry Bellergarde. “The tragedy of thousands of First Nations children in care tells us we need a new approach. This legislation will recognize First Nations jurisdiction so they can build their own systems based on their own governance, laws and policies. Our focus has to be on prevention over apprehension, and keeping children close to their cultures and families. We need investments to support this work, and we need everyone to support this approach. The time is long overdue for First Nations to finally regain responsibility over our children.”

This proposed Bill seeks to affirm the inherent rights of Indigenous peoples to exercise jurisdiction over First Nations, Inuit and Métis child and family services, support communities in pursuing self-determination and in making their own laws regarding child and family services. It is designed to increase efforts to address the root causes of child apprehension, and to reunite children with their parents, extended families, communities and nations.

Natan Obed, President of Inuit Tapiriit Kanatami, remarked, “I am encouraged by ITK’s relationship with Minister Seamus O’Regan and the Department of Indigenous Services, and anticipate further discussions between Inuit leadership and government as this legislation moves forward. With today’s announcement, the level of ambition of both Inuit and government have aligned to do more to protect Inuit children.”

“Time is of the essence in acting on the crisis of Métis children in care and ensuring the right of Métis governments to establish and maintain their own child-welfare agencies,” commented Clément Chartier
President, Métis National Council. “The proposed legislation is a necessary and long overdue first step to achieve that.”

Bill C-92 is the culmination of extensive engagements with partners, which began with the January 2018 Emergency Meeting on Indigenous Child and Family Services. As a result, the federal government committed to six points of action to address the over-representation of Indigenous children and youth in care, including exploring the co-development of legislation on Indigenous child and family services. Engagement with Indigenous partners, provinces, territories, and experts is ongoing, and will continue after the Bill receives Royal Assent.

According to Census 2016, Indigenous children represent 52.2% of children in foster care in private homes in Canada, but account for only 7.7% of the overall population of children under 15.

The first five Calls to Action by the Truth and Reconciliation Commission of Canada relate to child welfare, including Call to Action #4 which calls “upon the federal government to enact Aboriginal child-welfare legislation”.

In 2018-2019, the total First Nations Child and Family Services Program funding under Indigenous Services Canada is more than $1.1 billion.

Be the first to comment on "An Act respecting First Nations, Inuit, and Métis Children, Youth and Families introduced in Parliament"