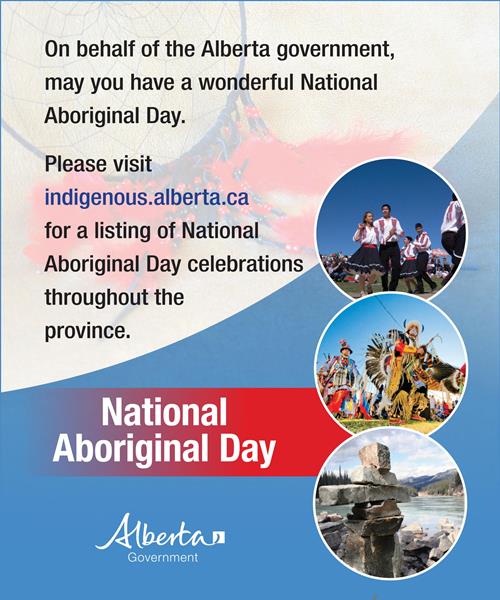 When the day was first introduced, all Canadians were encouraged to participate in the many festivities that were being held to celebrate the beautiful cultures of Canada’s Indigenous peoples and the important contributions they have made to building our nation. That message remains clear today and it is even more important this year as Canada celebrates its 150th Anniversary as a confederation of provinces.

This year Aboriginal Peoples Television Network (APTN)  is hosting “Aboriginal Day Live” – the largest National Aboriginal Day Celebration – on June 21, 2017, in eight host cities: Edmonton, Vancouver, Yellowknife,  Halifax, Montreal, Ottawa, Toronto and Winnipeg. All eight host cities will offer free daytime activities – and each will be as unique as the culture and Peoples of the region. To bring the Nation together in one great gathering, Aboriginal Peoples Television Network (APTN) with financial support from the Government of Canada through the Canada 150 Fund, is making this the largest National Aboriginal Day celebration in history.

In Edmonton, activities will take place at Victoria Park and start with a Sunrise / Sacred Fire Ceremony. A variety of Indigenous experiences, and artisan and other vendors will run from 10 a.m. to 5 p.m. A traditional powwow will take place from 11:30 a.m. to 3:30 p.m. and cultural performances and entertainers will be featured on the main stage from 12:30 to 5 p.m. 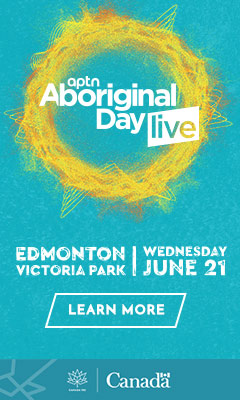 In the evening, Victoria Park will burst with some of the top names in Indigenous entertainment. A 7:15 pre-show will feature emerging artists Celeigh Cardinal, Bebe Buckskin, Nelson Little and Xandrah.

“Aboriginal Day Live”  will link all Canadians to celebrate and learn more about First Nations, Inuit and Métis Peoples. It will showcase the unparalleled talent that is woven into the mosaic of this country, and the experience will start right when you set foot on the grounds.

The eight cities will be united, despite the distance, through significant traditions. One will be the round dance or drum dance, which varies from community to community. Originally, a healing dance — it has also become known as a social dance in the form of a celebration. Participants join hands to create a large circle, as a symbol of equality, moving to their left with a side-shuffle step following the drumbeat, bending their knees to highlight the formation.
Everyone is invited to join hands, follow the beating of the drum and enjoy the beauty of the song. At noon – Central time – all are invited to gather in a show of solidarity in the largest round dance Canada has ever seen. It will be unlike anything you’ve ever experienced before, join one of the gatherings on location on June 21.

A special Aboriginal Day Live emerging artist pre-show from each host city will also be available on livestream at aborignaldaylive.ca.

To find out who’s playing in your city or for more information on daytime activities, including sunrise ceremonies, the round dances, artisans, children’s activities and more, visit aboriginaldaylive.ca or follow APTN’s social scene. Everyone is welcome to join the conversation anytime on Twitter or Instagram in using #ADL2017, and posts will be shared with the APTN social media audience.

Each year the City of Calgary hosts Aboriginal Awareness Week as part of their National Aboriginal Day activities. This year the opening ceremony takes place on June 19, from 11:30 a.m. – 1:30 p.m. at Olympic Plaza, 228 8 Ave SE, in Calgary. Educational, cultural and artistic activities continue throughout the week in a variety of locations.

Aboriginal Awareness Week Calgary (AAWC) is holding a Family Day Festival and Powwow on June 24 at the former Indian Village on the South end of Stampede Park. The theme of the day’s events is “Keeping the Circle Strong” and “Sharing our Culture Celebrating Canada’s 150th Birthday.” Activities will take place from 9:30 a.m. to 9 p.m. The Grand Entry for the Powwow and opening remarks take place at noon and the powwow ends at 4 p.m.  Free entertainment begins at 4:15 with a Metis Jigging Performance with Bev Lambert. Headline performers include Susan Aglukark, Eagle & Hawk and The North Sound as well as the Four Directions Foster Parent Association Metis Youth Dancers and the Green Tailfeathers. Visit aawc.ca for more information.

During the next two or three weeks Canadians will find many places to visit and many National Aboriginal Day events to participate in and celebrate the histories, cultures and contributions of the First Nations, Metis, and Inuit people of Alberta and Canada.

If you plan to participate in the many events that will be taking place from coast to coast this year, note that June 21st kick-starts the 11 days of Celebrate Canada! which includes National Aboriginal Day (June 21), Saint-Jean-Baptiste Day (June 24), Canadian Multiculturalism Day (June 27) and concludes with Canada Day (July 1).

For more information on what’s happening around the Province of Alberta on June 21, visit indigenous.alberta.ca and click on “National Aboriginal Day.”

To locate information on events in and around the City of Edmonton visit www.edmonton.ca and for events in the Calgary area visit www.aawc.ca.