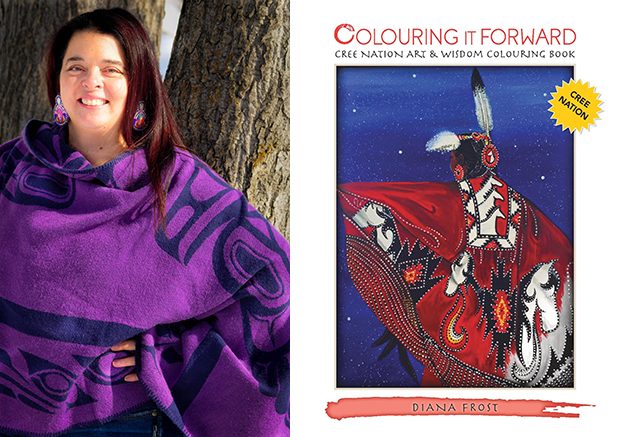 Colouring it Forward founder Diana Frost with a sample of the beautiful colouring and culture books that her company produces. 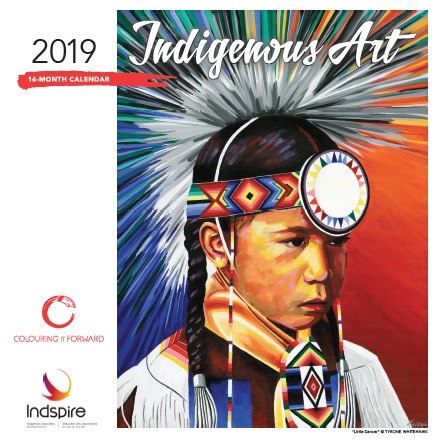 Beautiful calendars are available that include a wide array of cultural information as well as gorgeous images by Indigenous artists.

(ANNews) – The axiom “it’s a must-see” is an apt description of colouringitforward.com‘ because unless you’ve already seen the company’s products in one of its Alberta locations (and beyond), you’re in for a pleasant surprise. If you act quickly you may even be able to treat yourself and your kids to something special this Christmas.

“Colouring it Forward began as a series of colouring books,” explained founder Diana Frost, who launched her enterprise just two years ago. “I worked with two Indigenous artists and an Elder. The intent is to share the beautiful things, to create books that heal and books that teach, books that highlight Indigenous culture, pay respect to traditional values and honour the wisdom, words and teachings by the Elders.”

“In the news we learn a lot about the 60s Scoop, the residential schools, the missing and murdered women, girls and men and more and for the average person there’s not a lot of ways to get a balanced view – because there are a lot of positives out there too. It will be hard to get to reconciliation if all the people ever learn about is all the awful stuff. There has to be a balance. Working with the Elders, they told me that telling positive stories would be a good thing, a positive thing that will help people heal. If people learn about the good things it will help them to better appreciate Indigenous people if they understand there’s another side to the coin. The teachings in the books and in the stories are all positive and intended to provide a positive meditative learning experience.”

“The books can be enjoyed by both kids and adults,” Frost assured, and noted that school teachers are among the biggest buyers. “Teaching reconciliation is quite difficult for those who haven’t experienced the trauma of residential schools and because these books are based on the teachings of the Elders, who also participate in their creation, they are being accepted and becoming popular in the schools. The colouring books are filled with stories, the bios are all there with explanations about who the Elders are, who the artists are and much more.

The most recent book to hit the stands, Onagottay Heart and Wisdom Ojibway (Anishinaabe) Colouring Book has just been released and it comes via good karma.

“Onagottay (Elder Morris Blanchard) approached me to make the book,” she explained. “That was a different thing for me. I’m used to having to find artists and then an Elder, but this was different; it was so streamlined.”

As it turns out one of the Elder’s colleagues was in Yellowknife and found one of her Dene books and brought it home to him.

“When he saw it, he said ‘oh this is perfect.’ He liked the format, the feel, the artwork and the wisdom. The books are intended to honour the artwork and the wisdom; I want to make products that people will think are beautiful, valuable and cherished. That’s the intent with the books and the calendar, the cards – to honour the culture. The feedback I’ve been getting indicates that we’re on the right path.”

Colouring it Forward’s extraordinary 16-month calendar is filled with knowledge and beauty and with the turn of every leaf comes an artistically unique piece of Indigenous art – in full colour and created by Chipewyan, Cree, Saulteaux, Nuu-chah-nulth, Mohawk, Algonquin, Blackfoot, Stoney, Mohawk, Inuvialuit and Métis artists.

“The calendar is beautiful inside and out,” said Frost, noting that “this is the culmination of the creative work and exceptional talent of the 14 different artists and Elder who created it. Not only does it showcase amazing artwork, it also includes important dates for Indigenous peoples, honours Indigenous heroes and provides educational pieces on some of the issues faced by Indigenous peoples as well as calls to action for reconciliation and much more.”

The calendar also brings focus to Indigenous heroes and UNDRIP. One dollar from each calendar sold will be donated to INDSPIRE, an Indigenous-led charitable organization working on improving Indigenous education nationwide.

Diana Frost is an Algonquin Métis artist and entrepreneur with a new and promising vision of tomorrow and though she’s always been an advocate for Indigenous issues and people, this new venture – now a full-time job – came about through an act of fate.

An artist, musician and author by night, Frost was an engineer by day and that’s how she earned her pay. When she was laid off a couple of years ago as a result of the plummeting Canadian economy, she had a vision and turned it into a reality. For more than 16 years she worked on engineering projects in places like Colombia, Peru, China, and Rwanda.

“I’m very proud of the work I did while with the Centre for Affordable Water and Sanitation Technology (CAWST). We developed a “train the trainers” model so that by the time I left, I was able to verify I had helped 500,000 people get better water by empowering local NGOs to do the work themselves.”

During her time with CAWST she became aware of the poor water quality on some Canadian First Nation communities. From that knowledge and her desire to help, plus the yearning to learn more about her roots, the idea for her new project was born.

“The Colouring It Forward project began to grow,” notes Frost. “Along with my appreciation and love for the artists’ work, the colouring book series has given me a chance to learn more about First Nations people, culture and wisdom. I also have the opportunity to ‘colour it forward’ with these books by giving a percentage of the proceeds from the books to the artists, Elders and community projects to generate jobs, support small businesses and encourage higher education on reserves.”

To learn more about Diana Frost and Colouring it Forward, visit colouringitforward.com

Be the first to comment on "Colouring it Forward – it’s more than just a colouring book!"