(ANNews) – Métis artist Heather Shillinglaw is a hard-working, award-winning artist whose powerful creations have won numerous awards and found their way into private and corporate collections across the country. The beautiful mixed media painting gracing the February 2017 cover of Alberta Native News is her creation. It is entitled “Give Me A Boost.”

A devoted wife and a nurturing mother, Heather is also an active guest speaker, presenter, women’s advocate, educator, world traveler and an individual who works hard to promote her culture, community and country. One of her biggest joys comes whenever she is called upon to share, via her artistic visions or the spoken word, the knowledge of her proud Metis heritage and the lessons she’s learned from her Elders, grandparents and those she’s met in her travels to far-away places.

“I’ve been quite fortunate in that I have been able to develop some unique relationships with people in both South America and Europe,” explained the artist during a recent interview. “These opportunities have been presented to me thanks largely to the support I’ve received from the Alberta Foundation of the Arts and the Edmonton Art Council.” 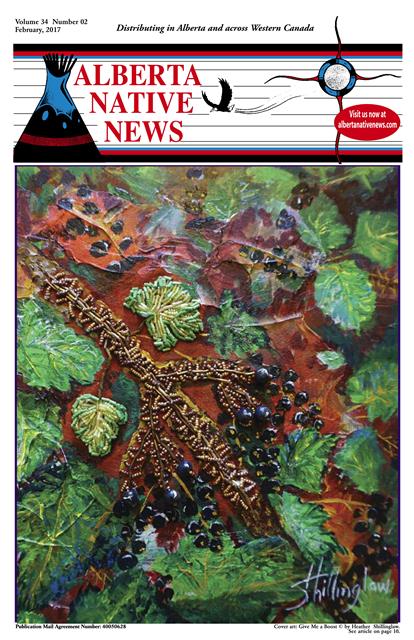 Shillinglaw has travelled to places such as Paraguay and Argentina and most recently, to the Hungarian capital of Budapest. She is currently awaiting word on a possible grant that will take her to Scotland, where as an artist-in-residence, she hopes to pursue an artistic creation in partnership with the Glenfiddich Distillery in Dufftown, Scotland.

“I find that no matter where you go people are interested in Canada and its Indigenous populations,” noted the artist. “I’ve spent many hours talking to others about Canadian history and the role of the Métis people within that history.”

The nine-day visit to Budapest, Hungary, took place during the latter weeks of August 2016. While in Budapest she completed an art installation entitled “Whispers in the Forest.”

“This work,” explained Shillinglaw, “began when I made a trip to the Cold Lake Primrose Air Weapons Range to document what was once my ancestors’ traditional hunting and harvesting grounds. I was a bit dismayed with what I came across and as a result I wanted to contribute something that would let people know just how delicate our environment is. Before the government took that land from my ancestors in the 1950s, it was a beautiful, contaminant-free tract of land, a sacred place that had been used and cared for by Indigenous peoples for centuries.” 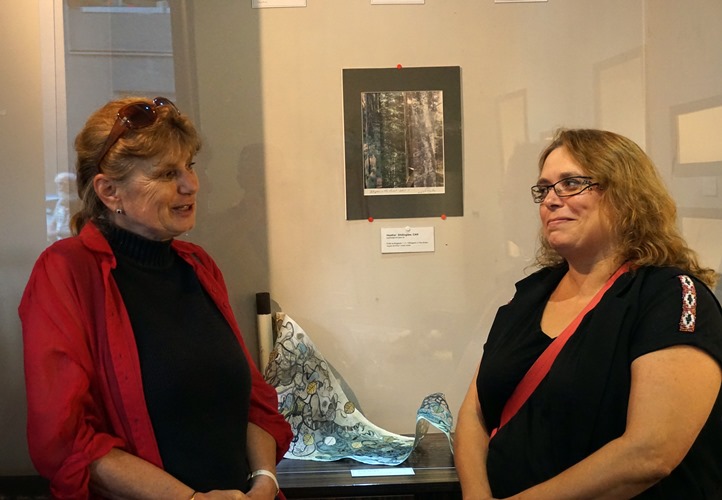 Without permission, Shillinglaw made her way onto and across the land and was appalled, but not surprised, by what she found.

“There was garbage and environmental damage in every direction,” she said. “The land was no longer in balance, no longer pristine, instead only destruction from constant abuse, spilled oil and garbage that included old signage, empty toxic containers, pop cans and other junk.”

To highlight the importance of maintaining a natural and toxic free environment, Shillinglaw’s “Whispers in the Forest,” was installed at the Hungarian Multicultural Centre (HMC), where it was curated by Beata Szechy and showcased for the ‘Environmental Art 2016 Exhibition’ at the Petöfi Irodalmi Múzeum and at Gallery 12, a gallery sponsored by the Hungarian National Gallery. 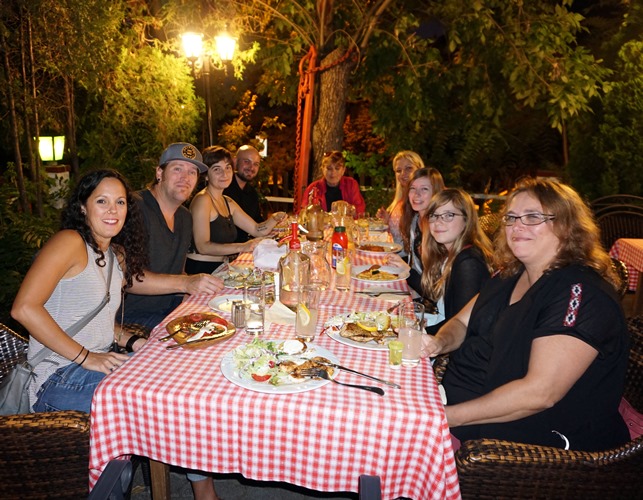 Heather Shillinglaw (far right) with a gathering of artists in Europe.

“During an informal dinner meeting,” noted Shillinglaw, “Curator Szechy told me that this was the first time the National Gallery took such interest in a piece of work coming via HMC’s global artistic exchange (program). The piece has garnered enough interest that the curator has plans to take the exhibit to Texas later this year.”

HMC, which opened its doors in 1990 as an artistic, educational institution, is an artist run, non-profit, multi-disciplinary arts organization dedicated to excellence, experimentation, and education in all forms of contemporary art and culture. The organization is dedicated to promoting international art and the understanding of world cultures, through high quality art exhibitions, cultural exchanges and related educational programs. 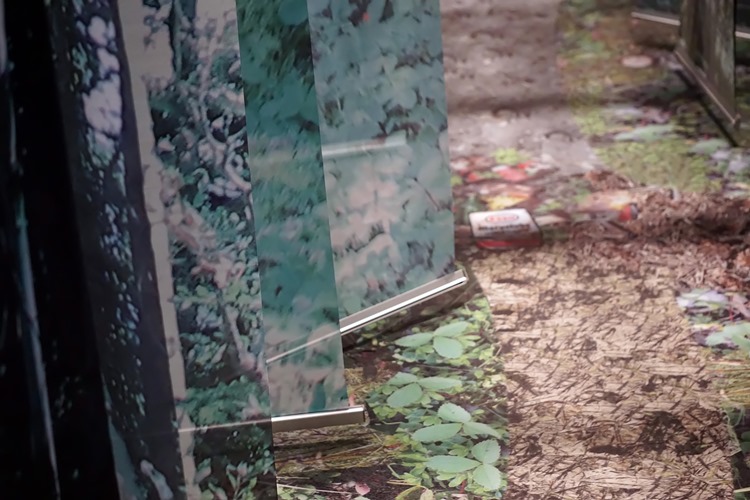 Detail from the “Whispers in the Forest” exhibit by Heather Shillinglaw.

“Their goal,” explained Shillinglaw, “is to inform and educate the community at large through cross-cultural exchange, provide an opportunity for artists to work and exhibit in Hungary, and provide the artists with a supportive environment and uninterrupted time to work during their Artist-in Residency program. HMC/AIR provides national and international emerging artists with the opportunity to produce new work while engaging with the arts community in Budapest, Hungary.”

While travelling, and visiting the galleries in Budapest, Shillinglaw received reviews from the general public and others.

‘One comment came from a commercial artist, a friend of Beata’s who works alongside the Hungarian Multicultural Centre who told me that the curator normally picks artists that contribute to the artist in residency program, an undertaking that usually comes with a cost. In the case of this exhibit, I was invited on the basis of my work and how the work was received in the exhibition and during both locations. I am pleased to say that my artwork was discussed for conceptual context from scholars representing the fine arts programs at neighbouring universities who attend the literary festival.”

Shillinglaw said the invitation to Budapest and the work she did to satisfy their criteria has enhanced her artistic acumen and is playing a role in enhancing her artistic career.

“Having the curator verbally recognize my work and then having it appreciated by Hungary’s National Gallery is truly an honour and a humbling experience,” noted Shillinglaw. “By supporting this work of art, and with the news and reviews I received in various articles, even though they are in the Magyar language, has enhanced my overall outlook and given me added confidence. The recognition my work received was beyond my wildest dreams. Establishing these new contacts and making new friends within the global arts community, and then bringing these connections back home definitely boosts my visibility and will undoubtedly help my career.”

Shillinglaw alluded to the fact that through her various conversations and the connections she made within Hungary’s artistic community she was often involved in conversation about environmental concerns, including global warming.

The Petöfi Irodalmi Múzeum is a cultural hub of scholars that discuss the arts of today. This exciting exhibition heard from poets, writers, painters and the general public where artwork was discussed in broader detail, not unlike what you would imagine to be the conversation of the art masters of the past.  “It is exciting to think that people on the other side of the globe understand the artistic message of the work I created – and what it means,” noted Shillinglaw.

Budapest is wonderful city, rich in culture, she added. “Turkish baths, Imperial and Roman columns with Corinthian facades, complete with art nuevo. It was an experience that I will never forget.”

Be the first to comment on "Feature artist for Feb. 17: Heather Shillinglaw"