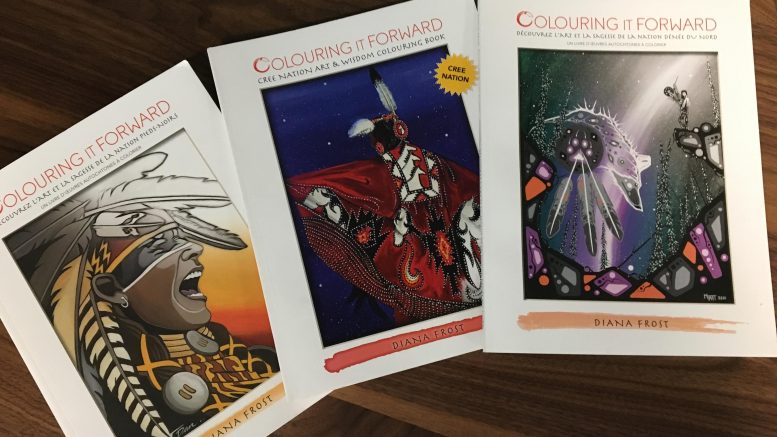 (ANNews) – Colouring It Forward is a shining example of the fun that can come with sharing culture and learning to be inclusive. It looks like a series of colouring books and although that is exactly what it is – it is also so much more.

Colouring It Forward is the brainchild of its founder Diana Frost, an Algonquin Metis artist and entrepreneur. It is a social enterprise, including a not-for-profit organization called CIF Reconciliation Society and a business called Colouring It Forward Inc. The purpose of the social enterprise is to advance education on indigenous issues, art, language and culture through a grassroots approach.

CIF Reconciliation Society works in collaboration with organizations such as Kamotaan Consulting and Making Treaty 7 Cultural Society to deliver art-based workshops and events that provide education on Indigenous ways of knowing and promote healing and reconciliation between Indigenous and non-Indigenous peoples.

But the company is best known for its beautiful colouring books and calendars.

“It began with an intent to share beautiful things, to create books that heal and teach, books that highlight Indigenous culture, pay respect to traditional values and honour the wisdom, words and teachings by the Elders,” explained Frost.

“The books are enjoyed by children and adults,” added Frost. They are filled with stories about culture and information about the artists and Elders who have collaborated with the project.

“The books are intended to honour the artwork, the wisdom and the culture; I want to make products that people will think are beautiful, valuable and cherished,” remarked Frost.

Colouring it Forward’s extraordinary 16-month calendar is filled with knowledge and beauty and with the turn of every leaf comes an artistically unique piece of Indigenous art – in full colour and created by Chipewyan, Cree, Saulteaux, Nuu-chah-nulth, Mohawk, Algonquin, Blackfoot, Stoney, Mohawk, Inuvialuit and Métis artists.

“The calendar is beautiful inside and out,” said Frost, noting that “this is the culmination of the creative work and exceptional talent of the 14 different artists and Elder who created it. Not only does it showcase amazing artwork, it also includes important dates for Indigenous peoples, honours Indigenous heroes and provides educational pieces on some of the issues faced by Indigenous peoples as well as calls to action for reconciliation and much more.”

One of the most recent CIF projects is a beautiful Indigenous Art and Wisdom Journal.

Frost explained the impetus for the journal. She said that ever since she began making colouring books featuring Indigenous artwork and elders’ wisdom, she received requests that she make a journal and books with full-colour artwork.  She finally decided to make a journal because she enjoys and benefits from journaling. “It helps me remember the good things that happen every day and to be grateful for them.”

“As with all my other books, I always work with an elder to guide my projects,” explained Frost. The elder who oversaw this project and wrote the passages inside the journal is John Sinclair. John is a Cree elder from Ermineskin and Good Fish Lake. He currently works in a penitentiary and with many other groups including schools, friendship centres and others. He spends his days sharing the teachings he learned from his teachers and trying to help people to learn and heal.

“I hope that the words he has placed in the journal will help to gently guide people in their meditations and progress along their chosen path,” she added. “John is a wonderful person, very patient and understanding, always loving and encouraging. I feel very honoured that he accepted to work with me on this journal.”

Shelley Rose May a.k.a. Metis Mamma is one of the artists whose work is featured on the cover and inside the journal. “I felt that her work was particularly well suited to this journal,” noted Frost. “That is because Shelley is a beautiful person, inside and out. She has such a kind heart and is always helping others. The messages and figures in her artwork are always inspiring, positive, empowering and beautiful. Shelley is a Cree metis artist originally from Prince Albert.”

Ryan Jason Allen Willert is one of the two Blackfoot artists featured in the journal. “Ryan is one of the first artists that I met when I was first starting the Colouring It Forward project. It is thanks to him that the Blackfoot colouring book exists because he introduced me to the elder and other artists that are featured in that book: Camille Pablo Russell and Kalum Teke Dan. Ryan taught me a lot when I was first starting out and helped me to better understand certain aspects of the protocol which is so important when working with Indigenous people and particularly elders.

“I’ve been impressed watching him develop as an artist, a teacher and businessman in the last few years. He is very serious about his artwork and about his culture and spirituality. He spends a lot of time teaching in schools, making murals and mentoring youth. He also has a very exuberant and playful side which is delightful. Ryan’s work in the journal shows a father teaching his son how to extract the marrow from a bone. It is a wonderful piece which shows his versatility and thoughtfulness.”

The Colouring it Forward project has allowed Frost to pay it forward. “Along with my appreciation and love for the artists’ work, the colouring book series has given me a chance to learn more about First Nations people, culture and wisdom,” concluded Diana. “I also have the opportunity to ‘colour it forward’ with these books by giving a percentage of the proceeds from the books to the artists, Elders and community projects to generate jobs, support small businesses and encourage higher education on reserves.”