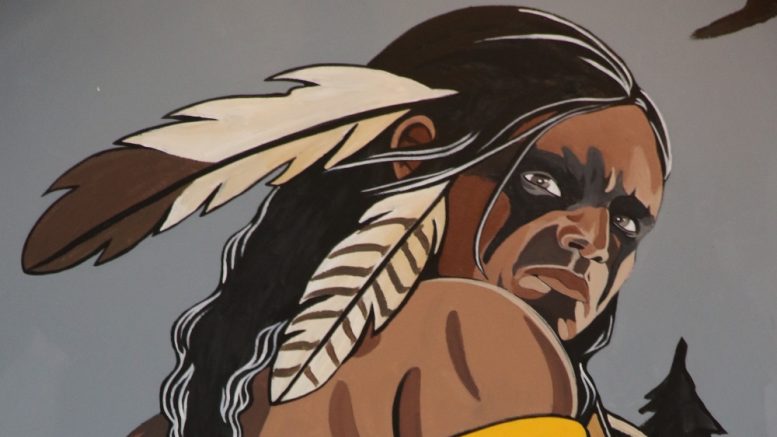 (ANNews) – Kalum Teke Dan is a talented artist whose powerful painting of a Warrior appears on the cover of the November 2019 edition of Alberta Native News. The image is part of the public art scene in Calgary; it is a panel of a spectacular mural that he painted at the entrance of the Dickens pub.

His art can also be viewed in a mural at NorQuest College in downtown Edmonton. The mural – “Power Spirit” – was etched into the glass facade of the college’s Singhmar Centre for Learning, which features a library and an Indigenous student centre.

“It was an honour to be associated even in a small way with such an ambitious and worthwhile undertaking,” remarked the artist. 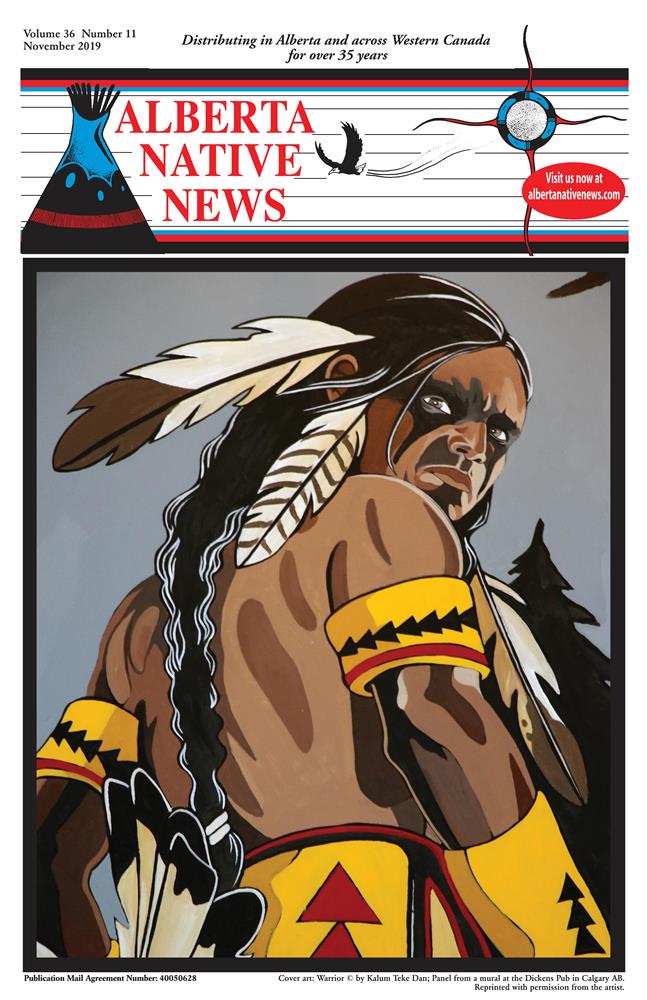 His most recent public art is located at the Calgary Central Library. Kalum completed one third of the massive mural that greets people as they enter the library.  The mural depicts teens sitting around a campfire. Images from their stories float amid the smoke and dust. The images include running horses, an eagle, petroglyphs and the towering presence of Chief Mountain, one of the most powerful symbols of southern Alberta’s Blood Tribe. The spirits of Chief Shot on Bothsides and Chief Red Crow hover in the sky.

The mural is part of The Calgary Public Library’s $500,000 Indigenous Placemaking project at the new central branch, which opened last year. Six artists were selected to contribute as part of the non-profit Place-Making Council of Canada’s mandate to restore “Indigenous presence to the fabric of our cities, towns and communities.”

Kalum, a member of Southern Alberta’s Blood Tribe, largely learned his craft by doing it. His raw talent has combined with his tenacious desire to create art and constantly improve his techniques.

He realized at an early age that painting and creating art was his calling and he has been doing it ever since.

Kalum credits his grandparents and his mother for their inspiration and encouragement.  His grandparents were internationally renowned artists, known for their bead work and traditional regalia.

“They were both very talented and traditional people who inspired and encouraged me to seek out my own path and to work hard at whatever task I took on,” he explained. “I was raised by my mother, Joanne, a strong-willed and determined woman who seldom missed a day of work. In fact, she was the first Aboriginal woman to retire from the City of Calgary after having contributed 30 years of service. My mother was my grounding force and she kept me on the straight and narrow; she always pushed me to continue with my art and I believe that her encouragement and support helped enable me to succeed and become the person I am today. Even now, I continue to push myself and am currently mentoring other artists who want to do what I’m doing for a living.”

Kalum has worked with many galleries over the years and has travelled extensively to demonstrate his talent and showcase his art. His beautiful paintings have found their way into many corporate and private collections, including those of several premiers, international leaders and many of Canada’s leading corporations. His work can also be found in galleries across Canada and the United States.

In 2010 his art was on display at the VVC in Vancouver during the Winter Olympics and more recently at the Western Oasis Showcase during the Calgary Stampede, where he exhibited his work along with that of about 60 other well-known Canadian artists.

He also recently participated in a cultural project with author Diana Frost. He is one of the feature artists in her book, “Colouring it Forward: Discover Blackfoot Nation Art and Wisdom.”

“It was an interesting project and one that I really enjoyed; I’d never worked on a colouring book before,” he explained.

“Four of us collaborated and worked together on the project. Red Deer artist Ryan Willert and I created the images while Blood Reserve Elder Camille Pablo Russel, a spiritual counsellor with the Elbow River Healing Lodge, oversaw the project to ensure that the cultural component was accurate and authentic. It was his wisdom, based on stories and cultures that he learned from his grandparents, that ran throughout the text of the book. The finished project was devoid of colour – but then again that’s the way it’s supposed to be when you are creating work for a colouring book. It was a unique project and it been very well-received by the public.”

Click here for more information about this talented artist.

NorQuest College honours its Indigenous Achievers with a special ceremony

Be the first to comment on "Feature artist for November 2019: Kalum Teke Dan"