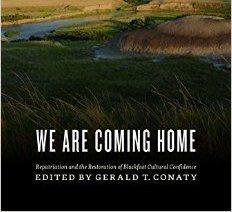 “With the generous support of the Glenbow Museum,” noted AU Press, “we hosted a memorable launch of the recent publication, We Are Coming Home: Repatriation and the Restoration of Blackfoot Cultural Confidence. The book, a collection of chapters written by museum officials and Blackfoot Elders, talks about the difficult, important, and incredibly rewarding work of returning over 200 sacred objects from the museum’s collection to the Niitsitapi. These objects, sold to colonizers in times of great strife, landed in museums where they often languished in storage. Now in the hands of the Blackfoot, these very same objects have revitalized traditional ceremonies and helped communities heal.” 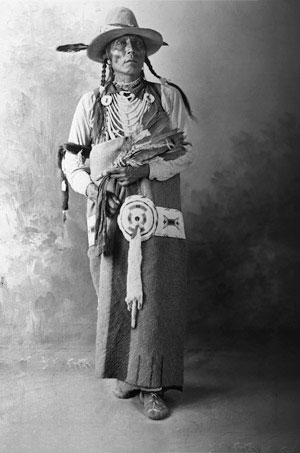 In 2000, the Glenbow Museum returned 251 sacred objects from its collections to the Niitsitapi (Blackfoot). We Are Coming Home is the story of the remarkable contributions of the Blackfoot community leaders and museum staff members who together made this repatriation possible.

The book launch included a short program that introduced a variety of speakers, including several of the authors who contributed to the book. Each author reflected on the work of repatriation and the significance of returning sacred bundles and other objects to their communities of origin. The gathering also celebrated and commemorated the life of book editor Gerry Conaty, who, until he succumbed to cancer in 2013, was the director of Indigenous Studies at the Glenbow Museum.

The book was edited by Conaty, and it was meticulously authored by Allan Pard, Jerry Potts, Frank Weasel Head, Herman Yellow Old Woman, John W. Ives, Chris McHugh, and Robert A. Janes. Conaty  also contributes as an author in several chapters of the book. We Are Coming Home is an interesting and educational offering that includes numerous photos and illustrations, as well as a thorough accounting via various tables and figures, references, notes and appendixes.

In his Prologue, Janes, a Queen’s Golden Jubilee Medal recipient, the current Editor-in-Chief of the Journal of Museum Management and Curatorship and the Chair of the Board of Directors of the Biosphere Institute of the Bow Valley, wrote at length on the relationship he established with Conaty and the goodness that came as a result of their friendships with the Blackfoot people.

“At the outset of our relationship at Glenbow,” noted Janes, “Gerry and I decided that the Blackfoot would be our priority, given that we lived in their homeland and the Glenbow owned much of their cultural patrimony.”

That priority never wavered, as noted in an email message received by Janes in January 2014 from Gerry’s spouse, Gwyn Langemann. In her message she said: “These friendships were important on a professional level, not only for the understanding they gave Gerry of the Blackfoot world view and cultural practices, but also because they were profoundly important to him on a personal level. Gerry greatly valued these friendships; he liked and respected them as people, and they liked and respected him. Like an evolving friendship, they contributed to making Gerry the whole person he was.” 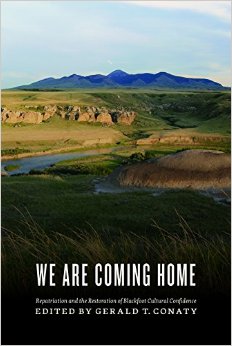 To that, Janes noted that “no friendship evolves or persists on its own, and all that has been accomplished by the Blackfoot and the Glenbow Museum is ultimately a result of the trust and respect that emerged from sustained, face-to-face encounters. This is truism, but achieving enduring relationships is an immense challenge for most museums, whether they claim a lack of time, resources or institutional focus as the obstacle.”

Conaty, hired as senior curator of ethnology at Glenbow in 1990, was given the mandate of improving the museum’s relations with the Aboriginal community. At the time the Glenbow had taken early steps by returning sacred object to the First Nations’ people. By the time that the Alberta Government implemented the First Nations Sacred Ceremonial Objects Repatriation Act (FNSCORA), which incidentally is still the only repatriation legislation in Canada, Conaty oversaw the return of more than 50 medicine bundles to the Blackfoot and Cree communities.

“Repatriation,” he wrote, “is a vital component in the creation of an equitable, diverse and respectful society.”

Conaty faced a great deal of criticism and various barriers in his early years, including some from museum staff. “While I had the full support of Glenbow’s then-president and CEO, Robert R. Janes,” he noted, “some other members of staff were not convinced that developing a closer working relationship with the Aboriginal community was a productive direction for the museum to be heading. At the time, it was uncommon for Glenbow curators to undertake field work, and some of my peers in the museum assumed that contemporary Aboriginal people would have nothing relevant to say about our collections, which are mostly historical in nature. In their eyes, I was wasting my time.”

Conaty was also “cautioned” not to become “too involved with the community lest I lose my objectivity and become an advocate for Aboriginal peoples’ causes,” noting in his book: “that while this sounds very reactionary today, in the early 1990s museums were just beginning to explore their roles as socially responsible institutions, to work directly with communities, and to refine their goals and objectives and the nature of their existence.”

Those comments and cautions, of course, turned out to be the real time-wasters because the Aboriginal people did indeed have much to say, and a great deal to offer; you can read their words in Chapters One through Ten. Each of the eight authors who contributed to this outstanding book has a number of interesting personal stories, anecdotes and experiences to tell and readers will not only enjoy their words, but will also learn from the wisdom the storytellers share in their personal stories. Readers will also benefit from the knowledge and eventual realizations that came about as each of the authors not only participate but share their knowledge about Aboriginal protocol, then and now.

We Are Coming Home is the story of the highly complex process of repatriation as described by those intimately involved in the work, notably the Piikani, Siksika, and Kainai Elders who provided essential oversight and guidance. Readers will also hear from the Glenbow Museum’s president and CEO at the time and from an archaeologist then employed at the Provincial Museum of Alberta who provides an insider’s view of the drafting of FNSCORA. These accounts are framed by Conaty’s reflections on the impact of museums on First Nations, on the history and culture of the Niitsitapi, or Blackfoot, and on the path forward.

In 2000, the Glenbow returned 251 sacred objects to the Blackfoot. Repatriation continues today.