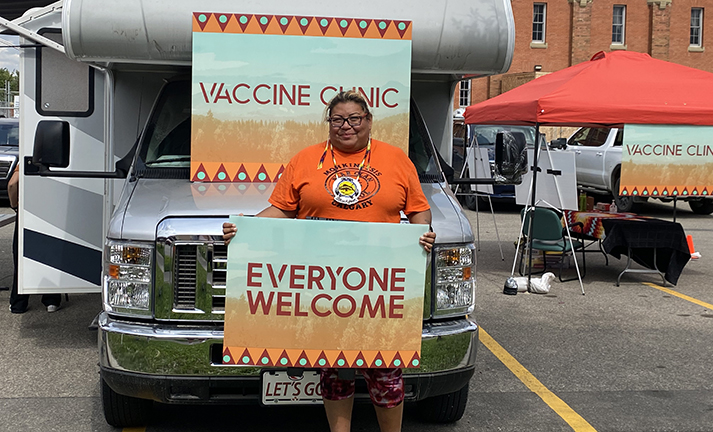 Yvonne Henderson of the Calgary Bear Clan Patrol says encouraging people to get vaccinated is an extension of the work she does in the community serving Calgary’s urban Indigenous and unhoused populations. (Photo by Jeremy Appel)

(ANNews) – Calgary’s Bear Clan Patrol and the G4 First Nations co-hosted an outdoor vaccination clinic at Shaw Millenium Park on August 21 for the city’s Indigenous population and anyone else to come get their shot and enjoy some lunch.

Henderson said Bear Clan Patrol asked for assistance from other Treaty 7 First Nations’ leadership, because only one — Siksika — has assisted them on their weekly patrol on Fridays.

Tsuut’ina helps with Bear Clan’s food bank, but Henderson says they were looking for further assistance. “We’re super thankful for them, but we wanted to see more,” she said.

The event was initially conceived as an outdoor lunch for the unhoused population, which was planned prior to COVID, so it ultimately came to fruition as a lunch and vaccination clinic.

“Regardless of the pandemic, Indigenous people are still displaced in their traditional territory,” said Henderson. “That’s why we can’t stop.”

The location wasn’t Bear Clan’s decision — unhoused people are reluctant to attend an event at Shaw Millenium Park, since they’re often kicked out of it — so after the event the Bear Clan took food to other parts of town, such as Forest Lawn, Westbrook and Marlborough, to feed the unhoused population.

Joel Fischer, a nurse who works on Tsuu’tina Nation, was at the event with a mobile vaccination clinic. He said they’ve been highly successful getting people vaccinated on reserve, so they decided to help out the urban Indigenous and unhoused populations, which often overlap.

Like any population, there’s some degree of vaccine hesitancy among Indigenous peoples, a distrust that is exacerbated by the legacy of colonial institutions, including the healthcare system, which Fischer says underscores the importance of actively doing outreach.

“We want to make it as easy as possible, so it’s just coming downtown, trying to meet people where they’re at, having conversations with them if they’re not sure, and do whatever we can to support people in getting those vaccines,” said Fischer. “It’s a friendly and positive place for people to come and see what we’re doing.”

Also in attendance was Sabrina Grover, the Liberal candidate for Calgary Centre in the upcoming federal election.

“To me, reconciliation is a personal commitment that you make to working with First Nations and Indigenous (peoples) to make sure everyone has an equal chance at living sustainability,” said Grover.

She said it’s important for her as a candidate to familiarize herself with groups who work closely with Indigenous communities so she can collaborate with them effectively if she’s elected.