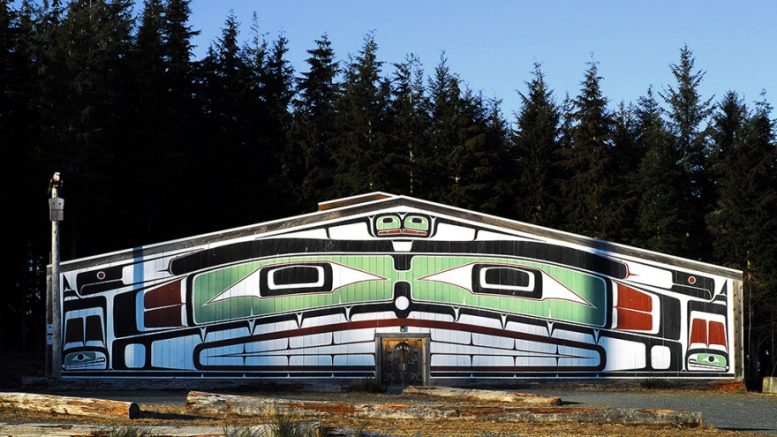 (April 29, 2020) – As coastal First Nations emergency teams race to put in place self-isolation measures, the ‘Namgis Nation is the first Indigenous community in British Columbia to have tragically lost a member to the COVID-19 virus.

The elder passed away last week after a cluster of cases were discovered in Alert Bay in late April. In ‘Namgis video messages, matriarchs are urging people: “Listen to the doctors. Don’t wander around anymore. Stay home.”

“We were just recovering from a huge outbreak of whooping cough when the World Health Organization declared COVID-19 a global pandemic,” she says. Even though people were being vaccinated, “it spread like wildfire” until the end of February.

“Like many First Nations communities, we have an extreme shortage of housing and overcrowding, with up to 14 people, a baby or two, and an elder also living together,” Melton explains. “That elevated our concern about the risks posed by people returning from outside the community.”

When the Nuxalk set up a highway information checkpoint to restrict access, they logged 14 pages of names of people seeking refuge – including campers and Americans with summer homes. After traffic delays became too long, “we decided instead to go a step further to ask our members to self-isolate for two weeks when they return to the community.”

Self-isolation means staying at home and refraining from grocery shopping, seeing visitors or hosting family get-togethers. The Nation took charge of the Nuxalk Motel for those who need to self-isolate. If members choose to return to their homes, their entire household must stay isolated with them.

Enforcing protective measures has been challenging for many Emergency Operations Centres on the coast. “There’s a false sense of security,” says Melton. “Half our community is asking why haven’t you completely blocked off access to the community? And the other half says, ‘It’s not here, so we don’t have to worry about it.’”

She says Hereditary Chiefs stepped in to help with enforcement by dropping information packages to households and encouraging families to follow isolation recommendations. Melton understands how difficult it is for her tightly-knit community to be physically apart. “It’s very hard. Throughout my day, I’m missing my coworkers and family. It’s just such unprecedented times.”

The Alert Bay outbreak has also heightened concerns for the Heiltsuk Nation. Chief Councillor Marilyn Slett says her community called for strong COVID-19 measures, including a lock-down on non-essential travel – recently extended to May 11. “It’s not forever, but people need to know that if they do go out of town, they may be out for an extended trip.”

Strict isolation orders require returning residents to stay inside with other household members. The Heiltsuk Tribal Council has developed a checklist for self-isolation planning and will be distributing 1000 masks sewn by local seamstresses.

“We’re trying to balance strong measures with preserving spiritual and mental well-being,” says Chief Slett. “It’s definitely been an evolving exercise. We’ve never had to experience this in our lifetime.”

Teri Kish, Emergency Coordinator for Old Masset Village, says a shortage of Personal Protective Equipment (PPE), only one ventilator, and a tiny hospital are a major concern for her community.

“If you’re coming from off-island to Old Masset Village, you are in lockdown for 14 days,” she says. Returning residents and essential workers must submit an online self-isolation plan and the Nation has engaged members to help out by harvesting fish, kaaw (herring eggs) and deer to deliver to doorsteps.

Despite strict COVID-19 protocols for burials, Melton says it’s been difficult to convince off-island relatives to self-isolate when they arrive for family funerals. “It’s the hardest thing to ask our people to do,” he says. “Right now, we’ve been in this process for a little over a month. People are getting frustrated with self-isolating because we don’t see any confirmed cases here yet.”

Kish is also worried the province’s recent move to declare hunting and fishing as essential services will bring more traffic. “We’re dealing with people who don’t have houses to live in and now we’re going to have people come to hunt for stags?”

Be the first to comment on "Coastal First Nations: Emergency Operations Centres Brace Against COVID-19 Threat"