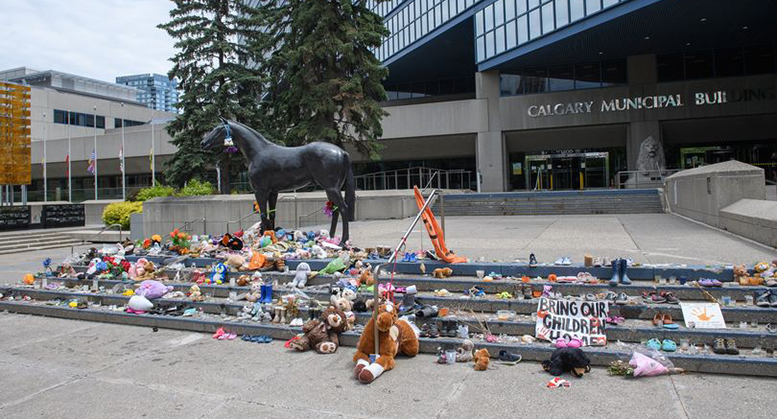 (Calgary) – Today, The City of Calgary joined Indigenous Elders in a Pipe Ceremony to bless the memorial that was established by the Indigenous community on the steps of city hall in honour of the children that did not return home from indian residential schools. The ceremony also signified a commitment between The City of Calgary and Calgary’s Treaty 7, Metis and urban Indigenous Communities to work together to find a shared path forward to remember the children who did not return home.

Elders, Mayor Naheed Nenshi, members of Council, drummers and members of the Indigenous community were present at the ceremony. “I am here to create a positive relationship with all walks of life and culture. We are bringing the energy to the place where we can all move forward,” said Elder Leonard Bastien.

“The memorial is an important reminder of the dark truth of what took place at Indian Residential Schools in Canada,” said Harold Horsefall, Indigenous Issues Strategist with The City of Calgary. “This is a truth that must not be forgotten. Today we committed to work together to find a way to remember the children so we never forget.”

The memorial, which displays hundreds of shoes along with other children’s items, will remain at its current location until further engagement with the Indigenous community has occurred and operational needs require it to be removed.

“Reconciliation calls to action are a priority for The City,” states the City of Calgary in a press release. As noted in the White Goose Flying Report, The City is committed to calls to Action #79 create school site commemoration and #82 establish monument.

“Commemoration cements the fact that once there were Indigenous peoples living here before newcomers came—memorials like the one being blessed today help Calgarians to never forget this.”