(ANNews) – A Métis father-son duo in Edmonton have created an environmentally-sustainable disinfectant that has been approved for use in Canada and the United States.

Dylan Frank says he established the Phresh Health disinfection company with his father, Kelly, and five other people, back in June. Of the 500-or-so disinfectants approved by Health Canada and the U.S. Environmental Protection Agency, theirs is the only one that’s plant-based. 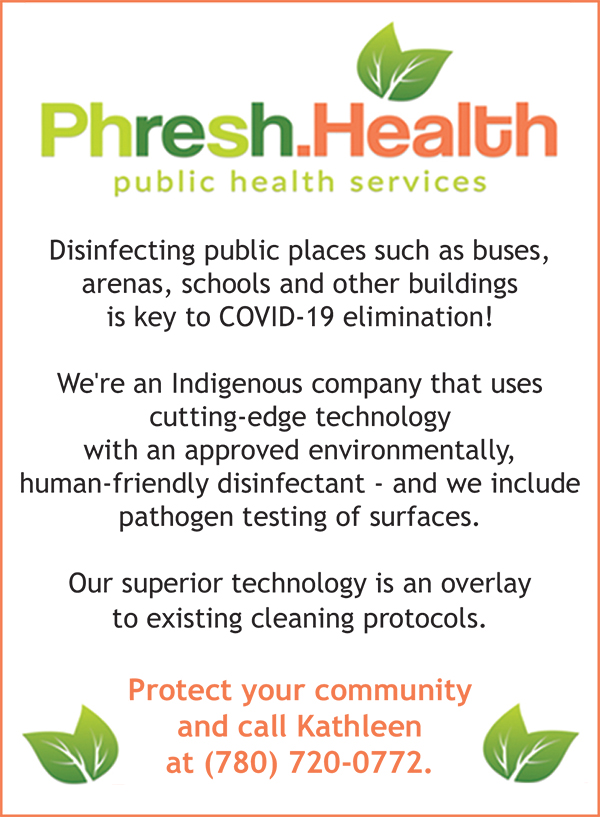 The product is made in Canada and the business is registered with the federal government as an Indigenous company.

“With COVID, it was essentially impossible to find a job months ago,” Frank says. “I was trying to think of an alternative source to make income. As we know, last summer was very boring, because there was nothing to do. You couldn’t go to concerts, you essentially couldn’t go to bars, hang out with friends or anything.”

This led to a brainstorming process with his partners to figure out a way to “resume people-to-people connections” and give people the “consciousness to go out and know that they’re walking into an environment that is environmentally-friendly and is cleaned properly,” said Frank.

He said there were doubts at first, since there are already so many cleaning products on the market, but that they found a niche.

“From what I’d seen, there was no other company that was trying to take an environmental approach to (disinfection). They were just trying to get in the door as fast as they could,” said Frank. “A lot of places are just using a really strong solvent and alcohol-based product. It’s just not safe to keep breathing in and it deteriorates random surfaces, like anything with a rubber seal.“

An information sheet from Phresh Health boasts that it eliminates 99.99% of COVID, and other pathogen, particles in less than a minute.

“You can literally spray it on an apple and eat it instantly,” said Frank. “It’s not bad to inhale, it’s non-corrosive. It’s just a really well-made product.”

Frank says they use a rigorous testing process.

“We use our plant-based product accompanied by a Hygenia testing device,” explains Frank. “Before we do any of our spraying, we do testing on the surface. It’s essentially just a swab test, and it’s put into a handheld unit that gives you a reading of the RLUs, or relative light units, and the amount of pathogens or viruses within that 2×2 space.”

After the swab test, they do their electrostatic spraying. “With the spraying, it’s a very fine mist that comes out of it. It’s hard to see with the human eye — you have to be under certain lighting to see it efficiently,” said Frank. “All the positive-charged particles wrap around all the negatively-charged particles.”

He said the positive charges have a “wraparound effect”, so if you’re spraying a door handle or steering wheel, both sides will get cleaned.

The goal is to have a Hygenia reading below 100, which is considered to be “extremely environmentally safe,” although hospital-room safety is around 80, Frank said.

“We do all the data management for customers, so we can prove area-by-area what our product is doing is actually working,” Frank said.

One major challenge is that at the outset of the pandemic, many businesses made bulk purchases of alcohol-based sanitizer, so they’re all stocked up.

Frank, who also works as a class 1 truck driver, says he’s accustomed to using alcohol-based sanitizers. He said a lot of his colleagues complain about it drying up their skin and can lead to breathing difficulties in a confined space, like a truck.

“I tried to find a product that would be safe for anyone to be around — no matter what age,” he said. “If you were to come into contact with it and get it on your skin, it’s not going to affect you. It’s not going to be a deterrent to any surfaces that it’s going on to.”

Phresh in the process of negotiating contracts. For information click here.

Be the first to comment on "Phresh Health: Métis father-son duo’s sustainable disinfectant approved for use in U.S., Canada"