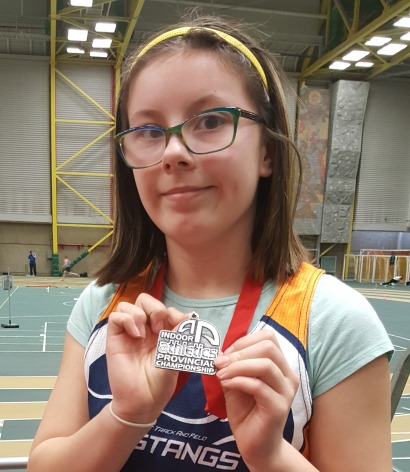 (ANNews) – Christina Hollingworth is a bright, energetic and articulate 10-year-old athlete, singer and Grade 5 student who is a member of the Enoch Cree Nation and attends school in Edmonton. The daughter of Chris and Corina Hollingworth, Christina was chosen to sing the National Anthem during the recent Memorandum of Understanding (MOU) signing between the City of Edmonton and the Enoch Cree Nation. She carried the room with her rendition of O Canada, and she did it in the Cree language, proudly delivering the lyrics with a beautiful voice that belies her young age.

“Christina is a good student who works hard to achieve her goals,” smiled her proud father, Chris Hollingworth, who noted that his daughter isn’t just a good student, but “a straight-A honour student” with goals for the future. She’s also an athlete, a singer and an inspiration to everyone who knows her. In school, Christina “enjoys science the most” when it comes to scholastics and badminton when it comes to sports. She has many interests and enjoys everything she does. She has also won gold medals for dance in tap, jazz and ballet and she has completed 3 years of the Yamaha School of Music in piano and has the bronze level for song composition.

Her father Chris enjoys supporting his daughter in all her interests. “Christina’s athletic ability and her determination to be good at everything she does has given her great confidence, healthy self-esteem and a keen mind,” he said. “She also loves to sing. She attends music school too, where they have an incomparable staff who work with her; Christina was the top vocalist in the 2016 Kiwanis Music Festival’s ‘under 16 years of age’ category.”

That outstanding ability was evident during the singing of Canada’s National Anthem.

“When I first started singing it in front of people I was six or seven and I was a bit nervous, but after a while I realized there was no reason to be nervous because everyone liked it when I sang,” explained young Christina as we talked about her accomplishments, school work and goals for the future. “When I sang two years ago, Mayor Iveson was in the room but I don’t know if he’ll remember me today.” 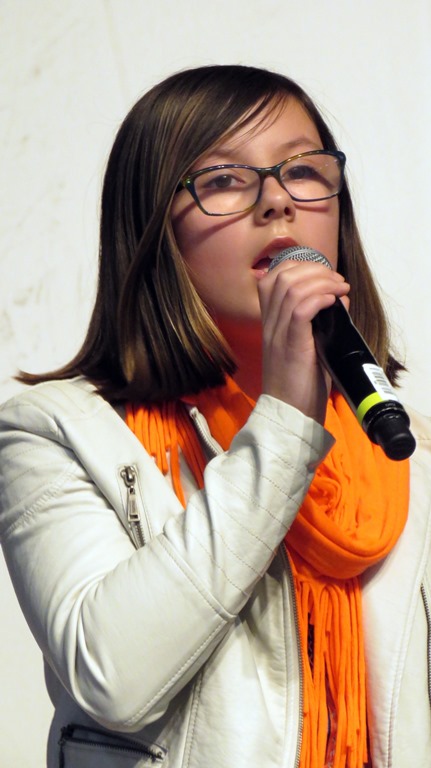 Christina Hollingworth opened the recent Enoch MOU event with a beautiful rendition of Canada’s National Anthem in the Cree language.

Christina said she likes spending her summers in Penticton, Osoyoos or Kelowna and remembers once singing there in an ice cream shop, “and once at a street fair where they asked me to sing when somebody’s instrument broke a string – and a few other places that I don’t remember as well.”

Christina has been an active participant in sports for as long as she can remember and earlier this month she won a gold and later a silver medal at the 2017 Athletics Alberta Track and Field Indoor Championships, an event that sees local athletic clubs compete for prizes in early March and then again later this spring.

“Yes,” nodded Christina, who currently trains with the Capital City Track Club, “I recently won, for the third year in a row, the gold medal in the shot-put event’s peewee category. I also won a silver medal in the triathlon in my age group. I placed first in shot-put, second in 60 metres and fourth in the long-jump and ended up with the silver medal. It was a tough competition and the girl who beat me was really good!”

Christina took the gold medal when her 2-kg (5 lbs) shot-put throw reached out to more than 8 metres (27 feet).  “It’s the technique that makes the difference; shot-put is all about technique – that’s something that my dad taught me.”

Chris, like his daughter is no stranger to athletics.

“My dad was a discus and shot-put champion when he was younger,” explained Christina, “and he taught me everything he knows about shot-put; I will also be taking up the discus pretty soon. My dad coaches me but it’s my mom who gets me psyched up at competition time. She said that much of her success comes from “my mom and dad who believe in me and are always there to support me.”

Christina’s mother, Corina, has also had an accomplished past as an athlete, model, academic and strong promoter of rights for First Nation’s people. Academically, Corina has a Business Diploma from SAIT, a degree with great distinction from Athabasca University and is currently completing her Master’s degree.

Corina notes that “both of my sisters have degrees, so does my husband and my brother has his NAIT Diploma and 20 plus years in Business and Finance.

“We all grew up on the reserve and our parents pushed us to both complete our educations and to retain our Cree identity. That is the same advice I am giving our daughter, to know where she comes from and to not be afraid of anything or anyone. Being a “brave” is about being brave in life. We need to recognize that our identity is not wrapped up in a stereotype. We make our own way by believing in ourselves.”

Great advice from a woman who overcame many obstacles and continues to strive for the best for her First Nation as the Planning Manager.

“We have a future,” she said. “We have hope and that’s what our kids need to know.”

When it comes to training, Christina has a good grip on things. She practices her singing at school and at home and she “usually trains twice a week to keep my strength up but when a competition is just a few days away I don’t do much because you don’t want to have tired muscles the day the competition starts.”

Christina has a beautiful young voice and it’s something that she hopes might propel her in the future; she looks forward to the day when she might sing in front of a large capacity crowd at an important event. But even more than that, she noted, “I want to become doctor; I want to work with people in a way that can really make a difference.”

Until then, she said, “I will continue to do well in school, practice my singing and work on my athletics. I like my school and I like my teachers and my marks are always pretty good.”

Dad Chris said that in addition to being a good student Christina also started the drama club last year and recently convinced the principal to allow her to start up a school newspaper. 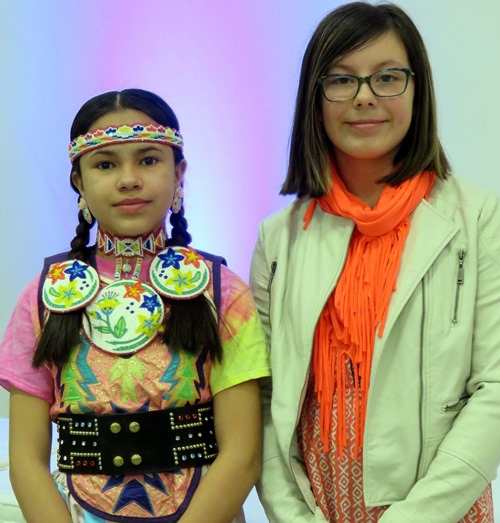 “I’d like to be the editor, but I don’t really know yet,” noted Christina. “I don’t know what the paper will be called, but it will be something that can promote the students and the school and talk about the importance of a good education.”

Christina has the wisdom and prowess of an older teenager and there’s little doubt that this talented and articulate young lady, now just 10, will accomplish all of her goals in the bright future that awaits her.

Christina is not the only talented youth in the family. Eleven year old Delphine Morin Zorthian is Corina’s niece and first cousin to Christina. Delphine is an accomplished second year gymnast and  gymnastics club member. She has won many awards from Canadian and USA pow wows from Tiny Tots to Princess and specials. She also enjoys dancing in all dance genres. She loves hip hop and fancy dancing and has won dancing competitions at different powwows in the USA.

Congratulations to these girls and their families. Keep up the good work!

Be the first to comment on "Young singer Christina Hollingworth: her accomplishments surpass her age"