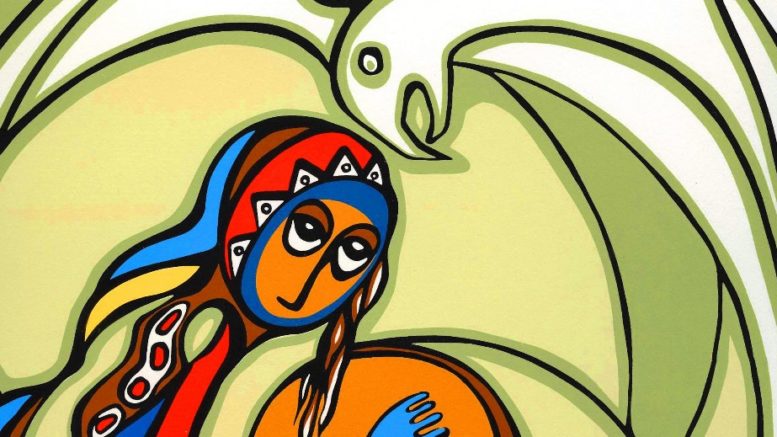 Detail of Reflections #112 by Daphne Odjig is on exhibit at the Red Deer Museum + Gallery until July 8, 2019. It was a gift of the estate of Dr. Kathleen Anderson Swallow. 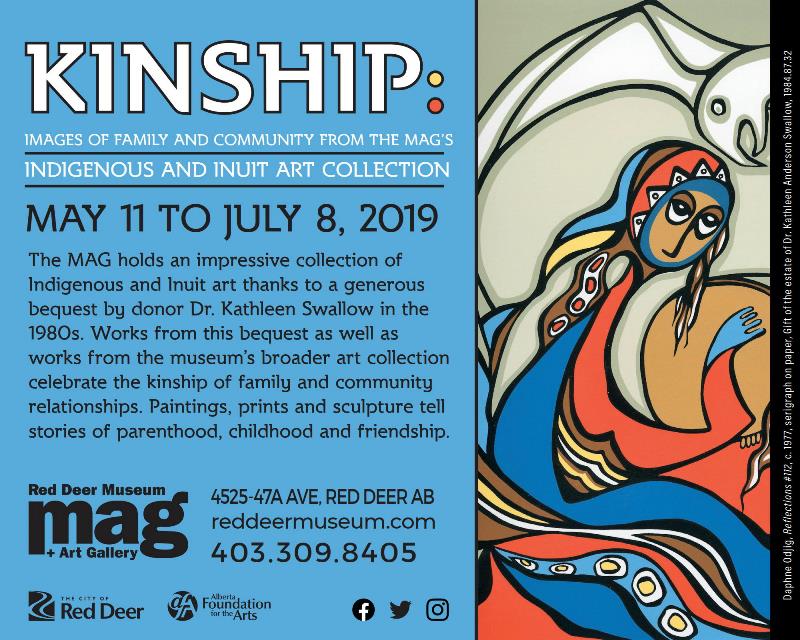 (ANNews) – The beautiful image on the cover of this month’s Alberta Native News is Reflections #112 by the amazing Daphne Odjig, one of the most respected and uniquely individualistic New Woodland artists.

The painting is part of a very special exhibit currently featured at the Red Deer Museum + Art Gallery entitled Kinship: Images of Family and Community from the MAG’s Indigenous and Inuit Art Collection. The exhibit will be on display at MAG until July 8, 2019.

Kinship is part of an impressive collection of Indigenous and Inuit art that was very generously bequeathed to MAG by donor Dr. Kathleen Swallow in the 1980s. Works from this bequest as well as works from the museum’s broader art collection are on display, celebrating the kinship of family and community relationships. They include paintings, prints and sculpture that tell stories of parenthood, childhood and friendship.

Artist Daphne Odjig was born in 1919 on the Wikwemikong Reserve on Manitoulin Island, a member of the Ojibwa tribe. Over the years, she has developed a distinct style based on the beautifully abstracted human form.  The visual motif central to her work is the circle, which to the Ojibwa signifies completion and perfection and is symbolic to women.  This motif is characterized by undulating, rhythmic lines, often heavily outlined, enclosing local colour in soft harmonious shades.  Her subject matter deals with human relationships in the context of Indigenous culture, the importance of grandparents, the function of the family unit, and the universal theme of mother and child.

Odjig has received numerous accolades for her art.  These include an appointment to the Order of Canada, an election to the Royal Canadian Academy of Art, Honourary Doctor degrees from the University of Toronto, Laurentian University and Nipissing University of North Bay, and the National Aboriginal Achievement Award.

Since 1964, Daphne Odjig has exhibited her work in solo and group exhibitions in Canada and abroad.  Her works have been collected by many public and private collectors including the Canadian Museum of Civilization, McMichael Canadian Collection, the Department of Indian Affairs, and the Canada Council Art Bank.

In addition to the Kinship exhibit, the Red Deer MAG is also featuring a touring reproduction of The Witness Blanket until June 23, 2019, based on the art of master carver Carey Newman, and circulated by the Canadian Museum for Human Rights (Winnipeg). 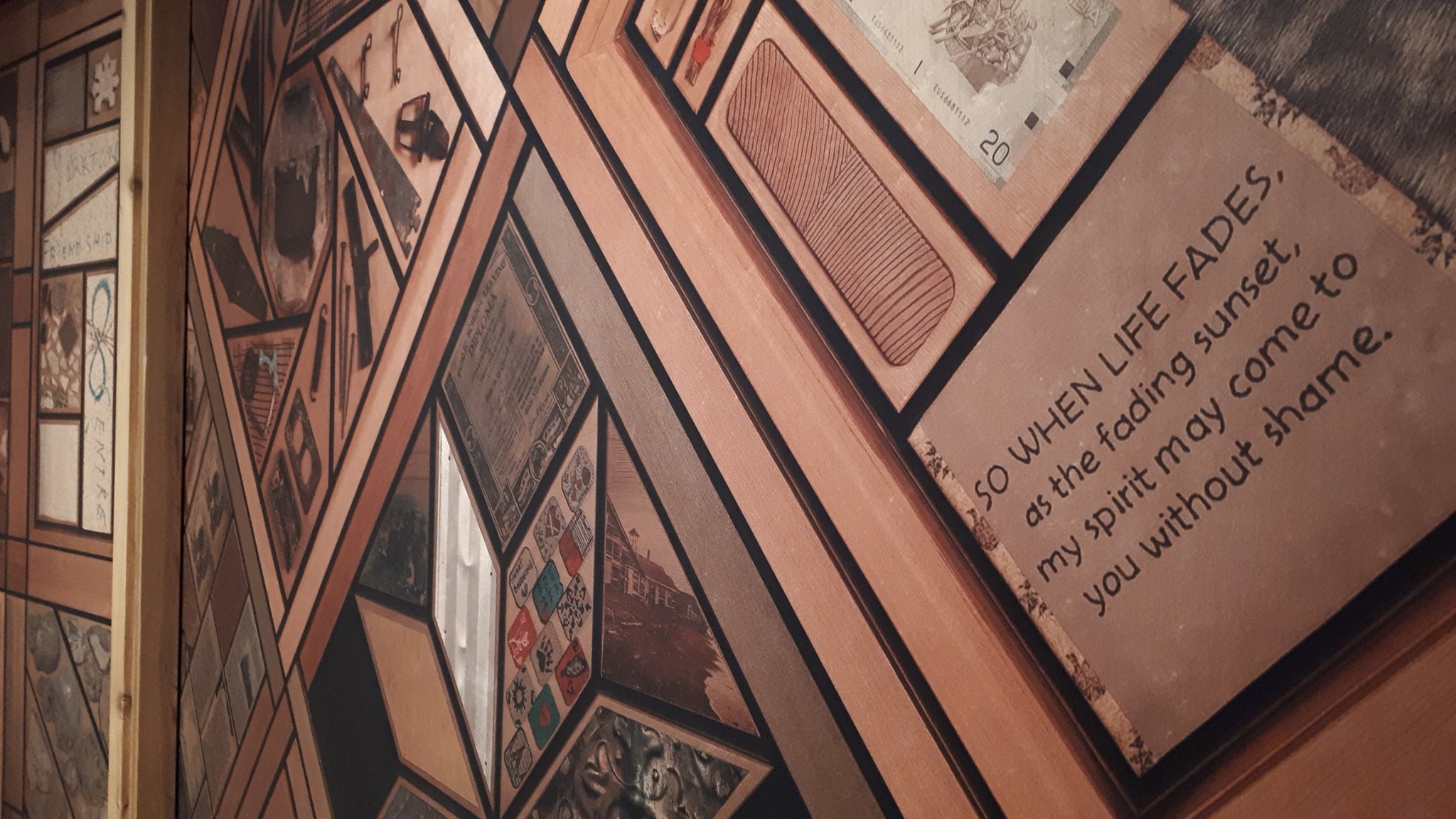 A touring reproduction of The Witness Blanket is on exhibit at Red Deer Museum + Gallery until June 23, 2019. It is a powerful monument to recognize the atrocities of the Indian Residential School Era and to honour the children who attended.

The Witness Blanket is a reproduction of a large-scale art installation, made out of hundreds of items reclaimed from Residential Schools, churches, government buildings and traditional and cultural structures including Friendship Centres, band offices, treatment centres and universities, from across Canada. The Witness Blanket stands as a national monument to recognize the atrocities of the Indian Residential School era, honour the children, and symbolize ongoing reconciliation.

The original Witness Blanket is currently undergoing conservation at the Canadian Museum for Human Rights (CMHR) in Winnipeg, after touring Canada for three years. Newman and the CMHR have partnered to create this reproduction of the Blanket, allowing its stories and messages to continue to be shared with Canadians from coast to coast to coast.

The Red Deer Museum also houses local reminders of the Indian Residential School era. The wooden headstone of Ellen Hart is preserved and displayed there. It is reported that she was 16 years old when government agents took her and her sister Matilda and six other children from the Nelson House First Nation in Northern Manitoba. The children crossed 1,600 km of forest and Prairie to arrive at the Red Deer Indian Industrial Institute for “cultural assimilation.”

Four out of the eight children from Nelson House died within several years from causes such as “decline” and “consumption” – including Ellen, whose 1903 death was attributed to “heart disease.”

Other objects from the Red Deer residential school – including a desk and a metal headboard still scrawled with some children’s names – help make this horrific history more tangible.

According to an article in the Red Deer Advocate, an historic study “found that Red Deer’s Indian Industrial Institute, which was largely made up of First Nations students from the Maskwacis area, had deplorable food and sanitation – and one of the highest mortality rates of all such schools in Canada. The facility, once located across the river from Fort Normandeau, was closed in 1919 and since demolished.”

Together with the local remnants, The Witness Blanket recognizes and honours victims and survivors of Canada’s now defunct Indian Residential Schools (IRS). The large 12-metre-long by 2.5-metre-high display, shaped like and reminiscent of a quilted blanket, includes more than 860 objects gathered from 77 communities across Canada. The objects themselves bear witness to the harsh realities and consequences of an archaic and brutal school system that saw children taken from their homes and forced in one of the more than six dozen government-orchestrated, church-run institutions that dotted the Canadian countryside for the better part of two centuries.

“This era in Canada’s history has caused more shame and indignity to the Indigenous peoples of this land than most people can imagine,” said Newman. He said that he grew up not realizing the depth to which he was personally affected by a residential school system designed to assimilate Aboriginal children by denying them access to their families, their culture, their languages and their way of life.

“The true history of the Indian residential school system and the impact that it has had on Indigenous Canadians, is difficult and often emotional,” he remarked, “but it is a history that needs to be told. The social consequences of those schools, and the multi-generational impact that is still felt today, need to be recognized and understood by all Canadians.”